PETE SEEGER AT OCCUPY WALL STREET
Although young people get most of the media mention, a large contingent of #Occupyeverywhere are elders. A week ago on 21 October, 92-year-old activist Pete Seeger led an evening parade of demonstrators to Columbus Circle in New York City. Also participating are Arlo Guthrie and Tom Chapin among others, all singing, This Little Light of Mine.

ANOTHER IPAD CAT
I can't tell you why, but I love it when cats choose human toys over their own. Since I don't own an iPad, I didn't know there are apps invented especially to engage cats.

THE MAKING OF MAUS
It's been 25 years since Art Spiegelman's two cartoon books about his father and the holocaust were published and won the Pulitzer Prize. Now Spiegelman has published a followup book, MetaMaus about why he chose to portray Jews as mice and the Nazis as cats.

You can read an interview with Mr. Spiegelman here. Below is a video for the new book.

MUSIC FORMATS
I'm not old enough to recall cylinder recordings but in my 70 years, I've been through 78s, 45s, 33s, 8-tracks, cassettes, CDs and now MP3s. If there is a newer format for music, I don't want to know about it. I'll go to my grave listening to my MP3s.

Which may be why I liked reading a story in last Sunday's New York Times about the growing cult of vinyl records and Gotta Groove Records in Cleveland – one of only 20 plants or so that still press vinyl records.

“'All these kids getting into vinyl for the first time — I think it’s a reaction to the constant interruptions in our life,' [owner Vince] Slusarz said. 'We’re used to instant everything. But to listen to a record, you have to put it on, you have to turn it over. It engages you more.'”

He makes me kind of sorry that I gave away all my vinyl many years ago. You can read more here.

WHY NO ONE CAN NEVER TRUST ANY PHOTOGRAPH EVER AGAIN
Political leaders are famous the world over for airbrushing unwanted people out of official photographs. Lots of others alter photos for many reasons. Time magazine has a terrific slide show of what they call the “Top 10 Doctored Photos of All Time” going as far back as the dawn of photography with Matthew Brady and the U.S. Civil War.

Now, a group of PhD candidates have created software that makes manipulation of photos and video so easy, I can do it and you would never know. Disingenuously, the inventors state on the website that “Our system has applications in the movie and gaming industry, as well as home decorating and user content creation, among others.”

Oh, right. No on would ever alter current events or history with this software. Here's a video showing the simplicity.

AMAZING WAY TO SHUCK CORN
It would not surprise me if I'm way behind the curve on this and you already know about it, but I'm knocked out that henceforth I can give up my war with removing corn silk – mostly unsuccessfully. (Hat tip to Darlene Costner) 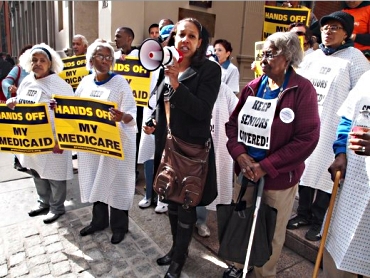 This is not the first group wanting to raise the eligibility age and won't be the last. Whenever and wherever we can, we must resist. The immediate result, if the age were raised, would be thousands of elders with no coverage at all because private insurers would make it unaffordable. Read more about the Boston protest here.

SIRI SNARK
By now you have probably read about Siri, the newest iPhone's virtual personal assistant slash artificial intelligence agent that quite successfully uses natural language to carry on what is almost a human conversation with users.

At the price Apple charges, an iPhone is not on my shopping list, but that hasn't stopped me being intrigued with Siri. Best of all, Apple developers have a terrific sense of humor in giving her (him?) answers to unanswerable questions that owners inevitably ask.

Jonathan Mann has created a duet with Siri. Example:

JONATHAN: What's the meaning of life?

Teehee. Here's the whole song with a lot more of Siri.

VENTRILOQUIST TERRY FATER
I always think I don't care about ventriloquists and then I get caught up in them – well, in really good ones like Terry Fater – and can't stop watching their mouths NOT move. This arrived via Darlene Costner.

Thanks for sharing this roundup.

Love kitten and the iPad. I like how they are so engaged and then stop to lick a leg, as if they want you to think they aren't interested.

Since I saw the video about corn, I haven't been able to find any to try it!

Great Saturday morning roundup & the corn video is wonderful. Can't wait to try it. I for one hate to shuck corn these days:) Have a great w/end, Ronni. Dee

Great way to begin a Saturday! These were lots of fun. The altered photos were fascinating, and I loved Terry Fator.

Pete Seeger- you gotta love him!

Thanks for hooking us up with Pete Seeger marching with the Occupy-ers !! We were friends and marched and sang together many times in the '60s. Watching him still marching and singing today brought tears to my eyes.

Interesting note: In Douglas Adams' book "Hitchhiker's Guide to the Galaxy," a 7 million year old computer, when asked what is the answer to "life, the universe, and everything," answers: "42." Siri is obviously a Nerd.

Kittens and iPads are a cute mix.

Photo manipulation ... I can easily remove unwanted elements from my photos in Photoshop, and add elements, too, along with editing the photos in a multitude of other ways. And it's only getting easier!

I'll bet people will quickly tire of Siri. I heard some of its answers on a talk show ... yawn.

What a great variety of entertainment!

Wouldn't it be cool if there was an app for Dance, Dance?

You know that computer dance machine strategically placed in movie theaters and malls?

Imagine one for CATS only. Four legged ones, that is.

That's a good idea for the technique of cooking corn on the cob. It takes the messiness out of it.

Certainly within ten years - or five, or maybe two! - using 'windows' and mouses or pecking away on keyboards to put text onto screens will be long gone.

Siri is a game-changer, a KILLER app, in the same sense that the Model T killed the horse and buggy.

I always enjoy your Saturday roundups, Ronni. Thanks!

And, not only can we never trust any photo anymore, we can't trust videos either, if you've seen the stuff at Bad Lip Reading. Geesh!

That corn shucking video is a truly neat item among many in this collection. My wife has two questions: (1) Do you microwave the ears on full power? (2) Do you cook the ears again after the husks are removed?

Will someone who has used the technique help us out? Thanks.