MOON ASTRONAUTS BLOOPER REEL
I guess it takes some practice before anyone can remain upright in one-sixth the gravity of Earth.


THE DESKS OF WASHINGTON, D.C.
I liked this slide show from Time magazine showing the desks of important political figures. This is Massachusetts' Representative Barney Frank's. 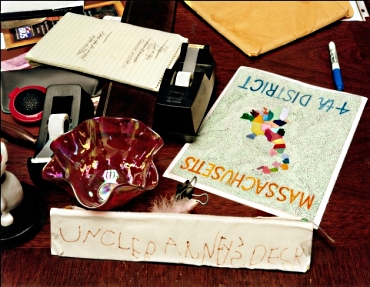 “I’d say of all the offices I visited, only one — Barney Frank’s —felt like an actual working desk, found in flagrante politics,” Davis says. “The rest of the desks were there for show, as objects of portent or as displays arranged by handlers and PR people.”

That doesn't make the others, revealing in their studiedness, any less interesting and you can see them here.

A REASON PEOPLE COME TO HATE GOVERNMENT
Wherever we fall on the political spectrum, it's the little things that pile up, I think that drive us nuts – at least that's true for me.

Because people in groups are pigs and leave their trash anywhere they want, officials at the Grand Canyon made a plan to keep that national treasure cleaner:

”Weary of plastic litter, Grand Canyon National Park officials were in the final stages of imposing a ban on the sale of disposable water bottles in the Grand Canyon late last year when the nation’s parks chief abruptly blocked the plan after conversations with Coca-Cola, a major donor to the National Park Foundation.” [emphasis added]

Let not a clean environment get in the way of corporate profits. Grrrr. You can read more here.

THE TWO BRYANS – A GREAT ADVENTURE
Elderblogger doctafil wrote to tell me about her nephew's grand adventure of a canoe trip with a friend (also named Bryan) from Alberta, Canada, to New Orleans.

They filmed the trip and the result is now a series on Canada's Travel and Escape television Channel (#145) on Thursday evenings. It's not on U.S. television yet, but doctafil says it will be showing up on YouTube. Of course, these days, there is a Facebook page and the two Bryans can be found on Twitter too: @PaddlingBryans

Here's a video of the beginning of the six-month journey. doctafil's nephew is the one with the bum knee.


OSCAR THE DOG'S STRANGE TRICK
I thought this was new when I saw it but now it feels like it's not so new. Is it possible I could have posted this before? Oh, well. It's still funny and I dare you to not laugh out loud.


PURGING CELLS TO COMBAT EFFECTS OF AGING
Some Mayo Clinic researchers may have discovered a kind of cell that hastens aging by causing low-level inflammation. As reported in The New York Times,

”...researchers have opened up a novel approach to combating the effects of aging with the discovery that a special category of cells, known as senescent cells, are bad actors that promote the aging of the tissues. Cleansing the body of the cells, they hope, could postpone many of the diseases of aging.”

The tissue of mice in the tests did not develop cataracts as they aged, avoided wasting of muscle mass and retained fat layers in their skin that usually thin out with age.

Of course, there is a long way to go before they know if this therapy is useful in humans but it is, I believe, what medical research into aging should be addressing rather than all those millions of dollars spent elsewhere on trying to extend life spans. You can read more here.

LARGEST BRA IN THE WORLD
In honor, they say, of breast cancer research. I am at a loss, but here it is.


I'LL WATCH ANY MOVIE WITH THESE TWO DAMES
(...of the British Empire, that is). Lilalia of Yum Yum Cafe reminded me of an upcoming film starring Judi Dench and Maggie Smith, The Best Exotic Marigold Hotel. According to an online synopsis, the movie

”...follows a group of British retirees who decide to 'outsource their retirement to less expensive and seemingly exotic India. Enticed by advertisements for the newly restored Marigold Hotel and bolstered with visions of a life of leisure, they arrive to find the palace a shell of its former self.

“Though the new environment is less luxurious than imagined, they are forever transformed by their shared experiences, discovering that life and love can begin again when you let go of the past.”

“Marigold” is not due in theaters until next March. Meanwhile, here is a trailer.


COBRA CAT
I've had cats all my life and I've never seen one do this. Amazing. My cat, Ollie, ran to hide when he heard these cats yowling. Such a scaredy cat, he is. (Hat tip to Jan Heigh)

I'm with Ollie! Those are 2 scary cats! And the movie trailer looks wonderful. What a refreshing departure from so many current films. Why can't there be more like this? After all, from what I'm reading, there are a whole lot of elders out here with even more expected. :)Have a great w/end. Dee

The cat drama is a territory dispute I believe. I've seen dozens of such fierce confrontations. They happen in my rural backyard between the home cat (an outside cat) and interlopers who wander by. Sometimes they jump briefly together in the air like the spinning balls of flying fur in children's cartoons, screeching like banshees.

Those cats are hilarious, as is the handstand-peeing dog!! Such weirdness! LOL

Loved the movie trailer. Always love the grins I wear after visiting you on Saturday's. Thanks for this new feature.

Fun to watch the astronauts stumbling around on the moon.

I've been on a few canoe trips but nothing like that one. Quite a workout for those lads.

Thanks for the fun this Saturday morning.

Looking forward to the movie. It's based on Deborah Moggach's tender, funny and poignant novel These Foolish Things which I enjoyed very much when I read it a few years back. And with a cast like that, the film's sure to be a hit. It'll definitely be one for your Geezer Flicks list, Ronni.

Will stand in line to see The Marigold!! And will probably sit through it several times (which I never do).

What a cast of of characters they have assembled here. Don't think I've seen anything like it in years.

What a marvelous cast in "The Marigold..." two favorite women actors and Bill Nighy & Tom Wilkenson, I can hardly wait. And thanks to Marian for pointing out another good author! Wouldn't it be fun to try the weightlessness of those astronauts. Thanks Ronni.

I will have to wait until The Marigold is on NetFlix. Darn!

The peeing dog and the scary cats are my animal fix for the day. Thanks for posting them.

Looking forward to when the movie, The Best Exotic Marigold Hotel, comes out

Ronni, my nephew is the one without the bum knee, but you never know what will transpire in the next episode.

Ronnie, thanks so much for posting the trailer for the movie. I can't wait to see it.

So funny about Ollie but he probably heard what they were really saying and getting out of the room was a safe thing to do.