LUCY AND ELDER CROWDSOURCING
Last week, I posted a message from a reader named Lucy who, at age 59, feels that her life has passed by and she has nothing to look back on. I asked if readers had any wisdom to share and you generously responded.

Yesterday, Lucy left a thank you on that story but maybe you won't get back to see it. So, I'm posting it here:

"I want to thank, firstly, Ronnie Bennett for putting my story/comment on her blog the way she did. I was so caring and nice the way she did it So, thank you Ronnie, so much. Secondly, thanks so much to all the people who left their comments and words addressed to me. I have read and reread them all. Thanks you so much to all of you for taking the time."

MILLIE GARFIELD'S SON STEVE SPEAKS UP FOR ELDERS
Most TGB readers know the wonderful Millie Garfield of My Mom's Blog. On 10 November, her equally wonderful son, Steve, was on a panel in Boston at the WBZ Business Breakfast. He told a story about his mother and along the way mentioned moi and Claude of Photoblogging in Paris. Here's the clip:

Steve is a well-known, online business guru, video blogger and indefatigable promoter of elderblogging. He emailed to say this about his clip:

”Some of the speakers were talking about old people as if they had no brains, i.e. not digital natives or even digital immigrants. Crazy talk. This was my subtle way to say that anyone can blog.”

Steve is all over the web and you will find one of his blogs here.

SCAN BAN AT EUROPEAN AIRPORTS
Last Monday, the European Union announced a ban on the use of controversial x-ray body scanners at airports in all 27 Union countries “in order not to risk jeopardizing citizens’ health and safety.”

At the time of the announcement, the U.S. Transportation Security Administration refused to comment. Then, two days later, the head of the TSA, John Pistole, canceled a public commitment to conduct an independent study on the safety of the x-ray machines:

“'My strong belief is those types of machines are still completely safe,' Pistole said. 'If the determination is that this IG study is not sufficient, then I will look at still yet another additional study.'”

You can read more about each story here and here.

Once again, he said she said. Who are we supposed to believe.

OCTOGENARIAN PEPPER SPRAYED AT OCCUPY SEATTLE At Occupy Seattle on Thursday's Day of Protest, an 84-year-old, life-long activist was pepper-sprayed by police. She wasn't injured and what is really interesting about Dorli Rainey is that protest is anything but new for her.

The Austrian immigrant was a teenage fighter with the German-Austrian resistance, the anti-fascist Democratic underground during World War II.

Here is Dorli's interview, following the pepper spray incident, with Keith Olbermann. She is inspiring.


TOWN OPENS CO-OP DEPARTMENT STORE
I love this story about Saranac Lake, New York residents who lost their only department store in 2002 and then resisted a planned incursion of Walmart that would have put locals out of business. Instead, they raised the money to start their own store:

”Shares in the store, priced at $100 each, were marketed to local residents as a way to 'take control of our future and help our community,' said Melinda Little, a Saranac Lake resident who has been involved in the effort from the start. 'The idea was, this is an investment in the community as well as the store.'” 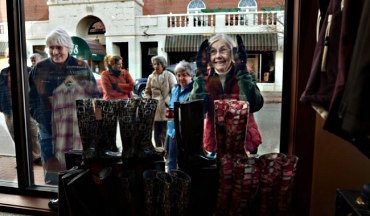 On 29 October, they opened their cooperative department store. You can read more about how the town did it here.

GORGEOUS 24-HOUR TIME LAPSE OF DUBAI
This is astonishingly beautiful photography. According to Gizmodo, photographer Gerald Donovan took “2880 shots over 24 hours, one ever 30 seconds, starting at 4AM local time on 11/11/11." The Burj Khalifa, at 2700 feet, is currently the tallest building in the world.


ELDER FASHION
A young man named Ari Cohen runs a wildly successful blog, Advanced Style, about elder fashion which has been on the Elderbloggers List here for several years.

I had not realized he has been including videos and interviews with his elder fashion plates until Marion Dent let me know this week. Here is one of the videos:

This kind of extreme fashion doesn't interest me personally but it's fun to look at now and then. Ari Cohen also contributes to Nowness website.

”[The first ebook] starts with a detailed history of the improbable origins of the tea party movement and ends with the bursting of the Chris Christie bubble and the tainting of Herman Cain.”

And it is stuffed with delicious dish to give us a rueful laugh now and then:

”Bevan and Cannon have dug up some good lines about the wannabes,” writes Corn. “The moderate incumbent Minnesota Republican state senator defeated by Michele Bachmann in a 2000 race says of her, 'Bachmann is the most dishonest, most deceitful person I've ever met in my life. She truly is a girl scout with a switchblade knife.'"

If this sort of thing interests you, there are links here for purchase. Kindle and Nook versions are just $2.99 and there are other editions for the iPhone, iPad and iPod Touch via iTunes.

BAR OLYMPICS
Nobody was doing this stuff back when I was hanging out in bars. I had never heard of bar olympics until Darlene Costner sent this video. It's just for silly fun and also just amazing. Or, maybe most amazing that anyone has time to perfect these tricks.


THE FRENCH SURE KNOW HOW...
...to get women to exercise. It's Darlene Costner again who sent along this video and you're gonna love it.


OOPS
Somehow I got clear to the end of the Interesting Stuff list for today without an animal video which has become tradition now. Okay, no video this week but here's a clever photo I like. 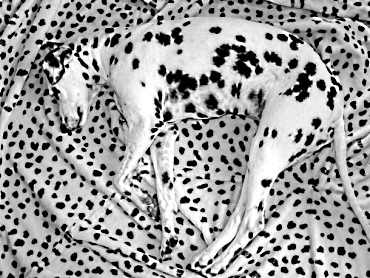 Here's a cute animal video for you ...
http://www.youtube.com/watch?v=3G1PFLuTrgM

And thank YOU for all the other wonderful stuff!

I gotta say, Interesting Stuff, has officially morphed into Fascinating Stuff. Ronni and Darlene, you are amazing.

Great post today! And Steve & Ari are 2 great guys......love them both for helping us to depart from the madness! Have a great w/end. Dee

Good stuff today! I love the bar olympics and the style blog, as well as the Dubai time-lapse.

You are equally wonderful!! ;-)

I loved the French exercise thingy. The women's faces were as excited if they were watching a real flesh and blood human being.

Delightful. Thank you. I love starting my weekend with a smile.

I don't know how you do it but day after day, you come up with topics, videos, references, etc. that seem to be chosen just for me.

The bar Olympics were great, such dexterity and watching the French women pedal up the show was great fun. It's great to see imagination and smiles are still out and about.

What a bright spot for the weekend. Thanks for sharing...I always find something good to pass along to someone else.