Perhaps to make up for last week's lapse in cute animal stories, this week they take up about half the items so let's get started.

OWLS – JUST OWLS
When I mentioned in last week's Interesting Stuff that I had forgotten to find an animal video, TGB reader laura left a link to this one.

In case you didn't click it, here it is. I am in complete agreement with a commenter at the video's YouTube page: “How the hell am I supposed to live without an owl now?”

The Occupy movement is producing some compelling and beautiful poster art of which this is just one. You can see many more at Occuprint.

WHERE'S THE OCTOPUS?
This is just take-your-breath-away amazing. A fascinating, marine biology lesson in cephalopod camouflage.


FUTURE EXODESK
There aren't many hard facts yet about this 40-inch, multi-touch computer from EXOPC which will debut at the Computer Electronics Show in Las Vegas in January and I WANT ONE. RIGHT NOW.

Unlikely to happen, since the price is $1299. Still, I love it and you'll see why in this teaser video. You can read a bit more about it here.


FIRST IPAD VOTING IN OREGON
Most experts say that internet voting is an idea whose time is not yet here but voting by iPad may work. It was tested with elder and disabled voters in a recent Oregon primary election and will be tried again in a January election.

”...these voters used iPads, brought to their homes or nursing homes by election workers, to call up their ballots, mark them on-screen and print them out on a portable wireless printer,” wrote Katharine Q. Seelye in The New York Times.

“The voters or assistants then either mailed in the printed ballots or dropped them off at election stations.

“One woman, who has impaired vision, was able to enlarge the print on her ballot so that she could see the names of candidates. A man with arthritis who could not hold a pen was able to touch the screen with his finger and mark his ballot.”

The program is expected to expand statewide and at least six other states are considering vote by iPad. It is a terrific idea for elders but, as everyone should remember, any innovation or improvement that works for old people is always good for people of every other age too. You can read more here.

GLIDER FLIGHT THROUGH THE ALPS
I picked up this video from James Fallows' blog at The Atlantic magazine website. Here's how he, also a pilot, explains:

“Courtesy of my friend (and glider pilot) Michele Travierso in China...If you watch even a little of this, you will see what an incredible feat it is. The pilots' comments are in Italian, but even if you don't understand that, it doesn't matter. This is another in the category of things I would be afraid to attempt myself but am amazed to see someone else do.”


GOD, I MISS GEORGE CARLIN
There's nothing to do when you have a Carlin attack but bring up one of his marvelous old routines which all hold up well. This one is on the advantages of getting old. Carlin is his usual, profane self and if you are offended, please don't mention it.

”Earlier this week, Cameron was dining with Work and Pensions Secretary Iain Duncan Smith and Northern Ireland Secretary Owen Paterson when a mouse was spotted scurrying across the floor. Larry was nowhere in sight, and so the Prime Minister did the only thing he could: throw a fork at the blasted thing...” (He missed.)

“So, naturally, there have been questions as to whether Larry should officially step down from his post and hand the torch over to a younger, more charismatic feline. The Prime Minister’s spokesman only had this to say on the issue: 'Larry brings a lot of pleasure to a lot of people.'” 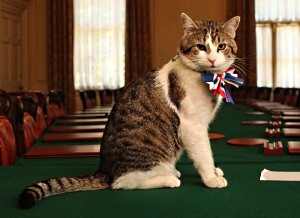 According to another news story on this crucial event, Larry's

”...first confirmed kill was in April, when he was also seen slinking around the cabinet table wearing a Union Jack bow tie to celebrate Prince William's wedding.”

You can read both earth-shattering stories here and here.

CATVERTISING
This wonderful, tongue-in-cheek promotional video comes from marketing services agency, Creative Results, that specializes in elders. Of course, it is designed to promote a client, but who cares. You're gonna love this and laugh like crazy. Well, I did.

Catvertizing! Hilarious! Thanks again for putting a w/end smile on my face:) Dee

Glorious glider video but how on earth do you land one?

Have always loved Carlin and loved the huge laugh from this one. And many thanks for the Catvertising-very funny and a great way to start the day. You never fail us.

Personalizing my desk would be just one more gadget that I had to learn to use. I don't think so.

Loved the cat video and Larry is a regal guy that should not have to step down.

This was a great variety. Thanks.

I was a glider in the 50s as the club was subsidised by the aircraft company I worked for. Nothing so ambitious as the Alps though, but nevertheless exhilerating.

Loved the Carlin one and will see more on YouTube.

Definitely interesting stuff!!!! Carlin is always a delight -- and Lord knows I miss him.

Oh, God, I love and miss George Carlin, too!

Thanks for this one -- you hit on a couple of my favorite things -- Carlin and cats. The owls were precious too.

What a great blog you have -- love your tastes and interests. Can never resist reading it in the mornings. It makes me smile and nod. It also reassures me that there are other mildly off-beat people in the world, and that's encouraging! ;-)

Love this collection of random items (particularly the owls and George Carlin). It's great fun to read here each day, 'cause I never know what I'll find; and, like Miki, I think I'm also another "mildly off-beat" person. :)