Home About Archive Contact
Retiring to a Hotel
ELDER MUSIC: 1967

THE STATUE OF LIBERTY – 125 YEARS
Back in 1986, I attended a gigantic fireworks display in New York harbor to celebrate the 100th anniversary of the Statue of Liberty. It was a spectacular evening. This is an artists rendition of the dedication of Lady Liberty in 1886. 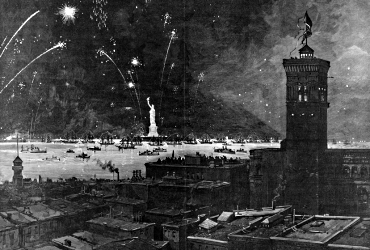 On 28 October, the 125th anniversary took place. In celebration, TalkingPointsMemo published a remarkable series of photographs of the statue from its construction in Paris up through today. Be sure to read the historical tidbits under the large photos.

Also in celebration, five snazzy, new, live, high-res webcams, donated by Earthcam, have been installed at the Statue of Liberty. They're fun to watch and you will find them here.

THIS IS MOVE YOUR MONEY DAY
When I came to live in Oregon last year, I opened checking and savings accounts at a small, local bank – the Bank of Oswego. There are no charges for elders. Period. Unless you count the ATM fee at other machines but those are not BofO charges.

On the rare occasion I need to see a bank employee in person, I am always greeted with an offer of coffee and cookies. A teller takes care of my needs with no waiting. They even count my bags of change without requiring the coins to be rolled. Plus, the president publishes his home phone number and customers are encouraged to call him with any complaints.

So I have no need to move my money.

For any of you who want to disentangle yourselves from the big banks, today is move your money day. I know it's a hassle, particularly if you have direct deposit of your salary checks or Social Security benefits. If you use online bill pay, that's an additional pain to set up.

However, there are plenty of available suggestions. This Firedoglake story has links to a lot of online help pages and this is the main MoveYourMoney page. It doesn't matter if you don't do it today. Next week would be good too. Or next month. And there is more good information here.

AMAZING MAGIC ACT
In our high-tech world, old-fashioned magic acts might seem outdated, but I love them still. I have never wanted to know how the switches, changes and disappearances are done; it's much more fun to remain in the dark about how someone charmingly fooled me. Here's an astonishing example Darlene Costner found.


OCCUPY WALL STREET AND ELDERS
Finding a toilet has been a difficult problem for Occupy protesters of all ages and it especially affects involved elders. As one young demonstrator noted,

“'It’s not cool, at all, and a big hassle when you have to go,' says Eugene [Oregon] protester Shelly, while pointing to her mother and father as 'backing us up 100 percent, but they had to go home to use the bathroom.'”

Journalist Barbara Ehrenreich concurs in a story at The Los Angeles Times:

“Anyone with restroom-related issues — arising from age, pregnancy, prostate problems or irritable bowel syndrome — should prepare to join the revolution in diapers.”

Elderblogger Kay Dennison of Kay's Thinking Cap has joined the Occupy movement where she lives in Canton, Ohio. Here's one report from her. Is anyone else who reads TGB joined the occupation? If so, tell us about it.

DONATE TO OCCUPY WALL STREET
On Thursday, FireDogLake sent off its first shipment of good to Occupy demonstrators in cold climates: 500 pairs of UFCW union-made socks made to withstand minus-40 degree weather.

“Of the $51,000 we have raised to date, we’ve already spent $42,000,” writes Jane Hamsher, “most of it on heavy-duty cold weather gear: thinsulate-lined masks and beanies, wool watch caps, polar fleece scarves and blankets, double base-layer, self-wicking long underwear, quilted jackets and vests, fleece pullovers, as well as the aforementioned -40 degree socks will all be going out to FDL members who will deliver them to occupations across the country.”

Read more here. You can donate to FireDogLake's Occupy supply program here by credit card. Or you can donate directly to Occupy Wall Street here. Scroll down on that latter page a bit to order food to be delivered to Zuccotti Park in New York City.

PENGUIN GOES SHOPPING
Maybe this video from Japan is really old and you have all seen, but I hadn't and I think it's adorable.

PAUL KRUGMAN – MY TEACHER
When the 2008 financial crisis hit us and I lost a sickening amount of money overnight, I realized that finally in my old age (then 67), I would need to apply myself to learn something about economics so that I could make reasoned decisions for myself (and, not incidentally, this blog).

Since then I have read popular economics widely and studied a (very) few more complicated texts. One of the people I turn to regularly to explain events and cut through the bull that politicians feed us is Nobel winner Paul Krugman who writes a twice-weekly column for The New York Times.

Last week, as the Economic Policy Institute (EPI) celebrated its 25th anniversary, the organization gave Krugman their first Distinguished Economist Award. That's nice, but I was much more interested in a short video interview with Krugman in his home with his wife, Robin Wells.

I spent more than 30 years interviewing celebrities and know that the single question most people want answered about the people we are interested in is, “What is he/she really like?”

This video doesn't go nearly far enough in answering that and there is a lot of fawning from other people (well, it's an award video, after all), but I enjoyed this more casual glimpse of Paul Krugman who helps me learn.


BEL KAUFMAN TURNED 100 YEARS OLD THIS YEAR
I'm guessing there is hardly anyone reading this blog who has not also read Up the Down Staircase - probably back when it was first published in 1965.

The novel, about an idealistic, young teacher who learns the gritty realities of life in a New York City high school, captured the imagination of millions of readers, made us all laugh a lot and remained on The New York Times best seller list for 64 weeks, becoming a movie of the same name in 1967.

Undoubtedly, Bel Kaufman's humor owes something to her grandfather, Yiddish humorist Sholom Aleichem whose Tevye stories became the basis for Fiddler on the Roof.

Recently, Ms. Kaufman was interviewed for a Guideposts video. (Hat tip to Tamar Orvel of Only Connect blog)


ELK INVASION
Darlene Costner found another good one. This is a story about the annual elk invasion in Estes, Colorado.

re: The Statue of Liberty... among my Top Ten Best Gifts from the USA to All! Watch this brief video (31 minutes) on the history and meanings of Lady Liberty:

Another Saturday morning spent reading your "Interesting Stuff" for an hour. I intended only to scan TGB and then go about my usual chores,but everything captured my attention and I am still here viewing videos and reading opinions and watching magic tricks and looking at penguins walking to the store easier than I do.

Thanks! Those boring chores can wait. I really enjoyed everything today, including Kay's Thinking Cap and all the comments she received for a job well done participating
in the Occupy Canton Campaign.

I too have taken in Paul Krugman as an economic mentor

Krugman is my economic bellwether, the best.

As usual, you start my day off just right. Tugster has photos of the Statue of Liberty boat parade too. :)

I'm notoriously slow at reading the news in the morning, but Andy Rooney died yesterday.
Here's the Washington Post article and images.

I, too, am a huge Paul Krugman fan! Thanks for the video. Have just added that to my 'favorites' list on YouTube.

And, by the way, loved the Paul Krugman blues they opened the video with!!

Also, shared the story and pix of the Statue of Liberty with a long list of friends and espcially with my grandchildren.

Bel Kaufman is just as delightful as her book, "Up the Down Staircase". I loved the book and now I love her. What a charmer. "Age is a matter of attitude" is so true and so perceptive. She is an inspiration.

I would love to move my money to a credit union (small amount though it is) to make a statement to Chase Bank. Unfortunately for me, they have a bank outlet in my grocery store and the nearest credit union is miles away. If I need to make a deposit or cash a check I would be unable to do so without arranging for transportation. Drat!

I use Paul Krugman's op-ed pieces often on my blog and always recommend him on Facebook. He is 'right on.'

I know you thoroughly dislike going to Open Diary, but there you can find Willy.

Willy is 97, and weekly he posts, with the help of an online friend Wilma, a magazine much like yours. There today I found "Earth From Above." These might fit well on your Saturday too.

Feel so much better after watching Bel Kaufmann. If only we could all be guaranteed to age as she has...........what a blessing. Thanx again for a great way to start the w/end. Dee

Didn't have much time today to linger here, unfortunately, but I did enjoy the magic video.

I live in Michigan's elk herd area and have seen them in the wild. They don't wander the streets here though, thank goodness.

While delivering flowers today, I passed by the Occupy Raleigh site, which has declined to 4 people and a dog. Maybe it was too cold for them.

Ronni, I am glued to the book "That Used to be us," by Thomas L. Friedman and Michael Mandelbaum. (2011)

(How America fell behind in the world it invented and how we can come back.)

Love the penguin. Wish I had one of them and a Vietnamese potbellied pig.

Think of the fun!

Regarding the occupy movement, today participated in Occupy St Augustine (FL)--it was only from 1p to 5 pm. Peaceful and fun seeing everyone's signs and even a few costumes. No worries about staying overnight--after a few hours I, with a few of my Unitarian friends, indulged in coffee and a bottle of wine!