One of the hardest things about writing a blog for and about old people is that by definition readers, acquaintances and friends sometimes die. Ten days ago, on 8 November, my friend Mort Reichek died in Florida after a two-week illness. He had just turned 87.

Mort called his blog Octogenarian – which is what he had recently become when he began blogging in February 2005. I don't recall how we met, but it was near that time and in addition to reading one another's blogs, we exchanged a lot of email about getting old, current events, blogging, New York City and whatever else came to mind.

Mort was one of the people who taught me early on how important and close online friendships can be.

In October 2009, Mort's wife Sibyl reported on Octogenarian that Mort had been severely injured in an auto accident:

”It will take months of rehab,” she wrote, “before he's back writing on his beloved blog. I wanted to thank everyone for all of their wonderful comments over the years. They have meant the world to him and you have brought much joy to his later years. My family and I look forward to the day when he can return to working on his blog again.”

I didn't hear from Mort for a long, long time. Then, in September, he emailed with an archived story from his blog for The Elder Storytelling Place saying it was a way of getting his feet wet before returning to write for his blog.

In October, he sent another story from his archive and I believed there would soon be some new stories for Octogenarian. It was not to be.

When I launched The Elder Storytelling Place, Mort was among the earliest people to send stories. You can read his first one here. He also contributed magnificently to "The Oldest Old Project” in 2008.

Before both of those, he was featured in a 2006 New York Times story titled Elderbloggers Stake Their Claim that included this great photograph of Mort by Barbara P. Fernandez. 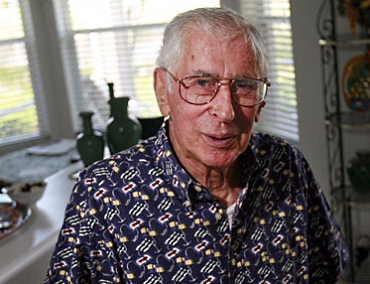 "I'm 81 years old and this blog has opened up a whole new world to me. And I'm not doing this because I'm a lonely old man. I don't lack for social interaction. I find it a fascinating hobby, and a fruitful one."

It certainly was – not only for Mort but for his many blog fans and friends. He had a wonderful way with words – as he should have; he had spent a lifetime making his living as a writer. Here is the notice of Mort's death from The New York Times last Saturday - I always wish I knew this kind of stuff before people die:

“Morton A. Reichek, a senior editor and senior writer for Business Week magazine, died November 8, 2011. He lived in Boynton Beach, Florida and was 87 years old.

“During his retirement, Reichek became one of the most prolific and well read elderbloggers, writing about politics, his childhood, Israel and his war experiences. His blog, Octogenarian, was highlighted in The New York Times, the Wall Street Journal and AARP magazine.

“A journalist with very wide interests, Reichek wrote about topics ranging from business to military affairs to Yiddish literature. He was with Business Week both in Washington, DC and New York for 31 years, retiring in 1988. Prior to joining the magazine in 1952, he was a press officer and editor for the U.S. Fish & Wildlife Service.

“During two periods of absence from Business Week, he was a Washington correspondent for the Newhouse newspaper chain, an associate editor of Forbes magazine and director of editorial services for Gulf & Western Industries, Inc.

“He was born in the East Harlem section of Manhattan and raised in The Bronx near Yankee Stadium. He attended DeWitt Clinton High School and earned a B.S. in journalism from New York University using the GI Bill. During WWII he served as a staff sergeant in the U.S. Army Signal Corps and was based for more than two years in the China-Burma-India theater of operations.

“He is survived by his wife of 58 years, Sybil, a daughter and a son, and three grandsons. Another daughter, predeceased him.”

My heart goes out to Mort's family and also to many of you. I know his blog was important to a lot of TGB readers and that he's been missed during his long absence.

When she feels up to it, sometime soon, Mort's daughter will write something at Octogenarian for us about her father. I'll let you know on this blog when that happens. And here is a list of all his stories published at The Elder Storytelling Place. Reading them now and then is an excellent way to keep him in our hearts and minds.

Ronni, thank you for sharing this sad news. Mort reached out to me in response to a comment I left here a couple of years ago. We then exchanged several emails — a brief e-acquaintance that remains a gift. His memory is a blessing.

Mort's was the very first blog I read, had no idea what a blog was and wanted to learn. From his list I found TGB, the only blog on my favorites list. Though I am a faithful lurker (and do not cherish that term) I appreciate you, what you say and do. Thanks to you and Mort. Betty

Such sad news. I always read and enjoyed Mort's stories and, as Tamar said I,too, had an Email relationship with him.He enjoyed talking about the Bronx and once gave me a tour of Yankee Stadium in writing.

He told a story once about his coming home after his WWII
tour of duty, and he told about how his father ran down the steps to greet him with unabashed joy and tears.He described the scene with such warmth and love I still get misty-eyed just thinking about it.

I was so happy to see his name recently at your Elder Storytelling Place and am glad I took the time to tell him how happy I was that he was able to write again.

Rest in Peace,Mort. We will always remember you.

Thanks so much for this Ronni.

Heartfelt condolences to you, Ronni, on the loss of your friend.

I am struck that the NYT seems to have adopted the language "elderblogger" for us. This bodes well for Ronni's campaign to get "elder" into more common usage in preference to "seniors" or other more dismissive labels.

Very sorry to only make Mort's acquaintance this way.

JanAdams...
Regarding the Times' use of elderblogger in that story about Mort: the writer, Lee Roberts, also interviewed me and I made a VERY BIG DEAL in our conversation about using that word to describe us.

I'm pretty sure no one at the Times has made a useful connection between one writer's use of elderblogger and a style decision to use elder and old person versus senior and elderly. That will take a longer campaign.

Although it surely is not among his many fine achievements, Mr. Reichek caused me to start blogging. I read the AARP magazine article describing his blog about six years ago, was encouraged to start one by an e-mail exchange with him, and am still at it some 300 posts later.

He was an exceptional writer and story teller. He will be missed.

Ronni--Thanks, so much, for the notification of Mort's death. Peace.

Oh, I was so sorry to learn of Mort's death. His blog was one of my favorites.

I never met Mort but I KNEW him.

Thanks for letting us know about this loss to the community.

This is indeed sad news. I read Mort's blog before I started writing my own and in time he became an on line friend. Millie Garfield, Mort and I were the only Octogenarians writing blogs that I was aware of. There were others older, but we three shared memories of the same era.

I never failed to read and comment on Mort's blog and it was often a trip down memory lane. I missed him and his excellent writing after his accident and, like Nancy, I was so happy to see his name in the Story Telling Place. I, too, am thankful for the opportunity to tell him how much he was missed.

Rest in peace, Mort. You are sorely missed.

Those comments of Mort you printed where he said blogging opened a whole new world for him was spot on for me. I too find it "a fascinating hobby, and a fruitful one."

I have been reading TGB for less than a year so I wasn't around to catch his stories. My misfortune.

He looks like the kind of man who would sit and have a long chat with you, on any topic.

Great that you had this true friendship.

My condolences to Mort's family and all who considered him a friend. He was an inspiration to many of us. He will be sadly missed.

Thank you for the information.
Mort commented on my blog, back when I was a newbie blogger.
I was thrilled!
I truly enjoyed his stories.

I'm sorry. I have read his blog in the past, but had lost touch.

So sorry to lose a talent such as Mort. I remember a brief email exchange with him about the time I found ESP. Sorry you lost your friend, Ronni. Very sorry...

When I started to write in a more focused way for both my blog and The Examiner.com, Mort's blog was my model. We e-mailed each other over the years and I was always leaving comments on his blog which was a model worth emulating. His daughter wrote me a few days ago that he'd passed away and I'm so glad to see this here. He was a fine man and a wonderful writer - we don't see his like very often.

He was a fascinating man. We didn't agree on all things, but I loved his stories and his opinion mattered to me. He was a loyal follower of my little blog entries and I was loyal to him. I sat over here in rainy, damp Scotland and said a few prayers for him when everybody was sitting shiva over there. May he rest in peace.

Aw, Mort. Geez, this news makes me so sad. I was hoping so strongly that one day a new post would appear at his blog. He was one of the first bloggers (not just senior bloggers) I exchanged comments with, and I adored him just from those short communications. I am grateful to you, Ronni, for all the links to his various writing. What a lovely thing for you to do in his memory. My sympathy to his loving family and all his friends.

I didn't see this post last Nov. Checking my blogroll yesterday prompted me to think I was long overdue to check on Mort as I had periodically been doing since his hospitalization.

I was saddened to hear of his death. I left a comment at his blog expressing my sympathy to his wife and family, but not sure if it will publish now.

His blog posts, emails and comments were always interesting and enjoyed. He continues to be missed.