Sunday at the Movies with Ronni

I had a plan for Sunday to write a Monday post that would knock your socks off in its brilliance. Well, that's often the plan and I've yet to achieve it, but I did have a couple of important things to say.

Instead, I puttered around and read the papers and made a few lists of this and that. I chatted with some far-away friends on the phone. I sorted most of the paper on the desk and I played with the cat for a while. Then, previously unplanned and a surprise even to myself, I up and went to the movies. 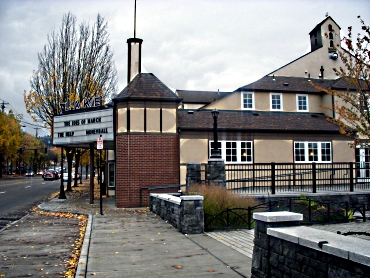 It's a ten-minute walk from home and this little theater here in Lake Oswego is the same one my mother took me to when I was a little girl – about 65 years ago.

When I got home two hours later, I didn't feel like writing, so here as filler for today are a few photos I've collected during the fall color season. You'll see that it doesn't take much to amuse me.

Each morning this time of year, I open my front window to a dazzling show of many shades of color – red, yellow, green, brown, orange and all. 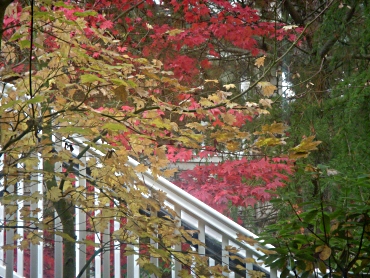 Sometimes it is the abundance of one color that is spectacular. Yellow is nice. 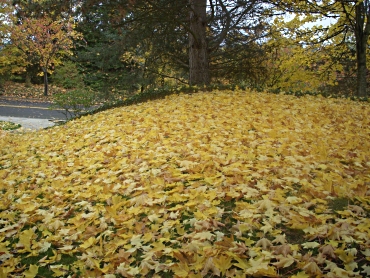 And so is red. 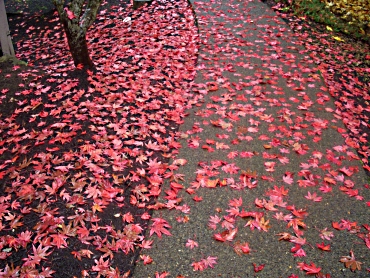 More red with a touch of green and yellow. 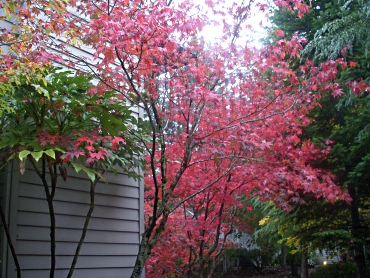 Mushrooms pop up all over the place after a rain shower. I wish I knew what was edible. 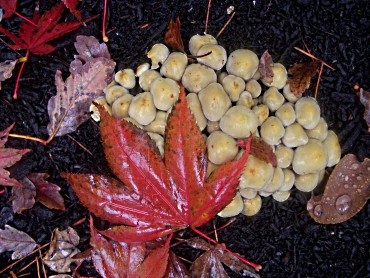 There had been a bag of peanuts in the shell sitting around in the kitchen for too long so one morning, I put a few out on the patio table and look what happened. 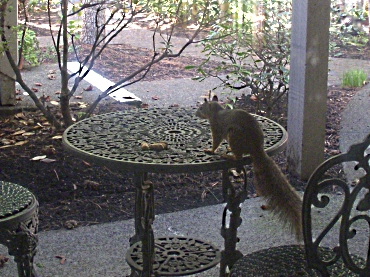 No squirrel I've seen has ever visited that table before. I wonder how they know when something they like appears.

Oh, the movie. It was the early show, 1PM, with only about a dozen patrons. Not one of us was younger than 60 which I thought was strange. Since I was young, I've made it a habit to catch up with movies at early screenings on Saturdays and Sundays, especially on rainy days like yesterday and it was always a mixed-age crowd. But not here.

This was George Clooney's new picture, The Ides of March, with Ryan Gosling and a few other big names about a primary race in Ohio for the Democratic nomination for president.

Meh. It wasn't terrible but it sure did need some energy. The title is way too dramatic for such an underwhelming film. It would have been better to stay home and watch Bulworth again or The Best Man or Bob Roberts or a slew of more interesting political films.

Lucky that you can just take a short walk and get to the movies.

For me it's about a 45 minute ride and for the longest time now there hasn't been anything I've wanted to see.

Finally this weekend went to see J. Hoover. Not worth the time or money.($8.50 for a senior)

DeCaprio did a great job as Hoover but the makeup person should be shot for making Hoover's buddy look like Boris Karloff.

Oh,and the movie ran for over two hours - way too long.

I miss going to the movies but I'll stay home, save money and see better stuff on TV!

I have seen better movies on TV.

One of the wonderful rewards of getting older is the enjoyment of observing and savoring that which is around us. A leaf, a squirrel, a cup of tea; these are all treasures that we didn't really stop to appreciate when we were young. You understand this, and your readers do also.

Because I have netflix and can, I have been on a Jane Eyre kick watching the many different versions of the same story by different actors, directors and screenwriters. I have one to go but had to take a break from it as my husband was beginning to get glassy-eyed at the suggestion we'd do another one (another miniseries :)

Love that theater for the memories, took my grandson to his first in a theater movie there,"The Incredibles" which was much better than J Edgar.
Haven't seen the "Ides of March" guess I'll wait for the DVD to ren, if I don't forget ;-).

Last Sunday, like you Ronni, I took off on a whim to our local walk-to theater. (where once I took my kids) I had a real treat in seeing the delightful, "Afternoons with Margueritte" with Gerard Depardieu. In French (with subtitles), it depicted life in a French village and the friendship between the village oaf and scapegoat and a 95 year old woman that he meets on a park bench feeding the pigeons. It was so uplifting that I was sorry when it ended. Our reviewer made a comment about it being "perhaps a bit too obvious," but also that "he was too charmed to care." I walked home charmed and smiling. Alas, it was only here a weekend, as is too often the case for anything a notch above the usual.

A movie buff since I was a child, I too find that there's not much out there that I can't get on TV - and with "On Demand" it is still cheaper than the going rate everywhere. And I don't have to drive. There is something almost magical to me about a Sunday afternoon in the Fall, walking through the leaves in the crisp air ... to a matinee, as I did all those years ago.

What a dear little movie theatre! And the pics are gorgeous. AND we still have that Brilliant Post to look forward to, right?

I absolutely LOVE going to the movies - especially to see films that are alittle quirky and not produced with the taste of the masses in mind. Here on the Oregon coast it is hard enough to have a movie theatre (30 miles round trip from my home) and I don't see as many movies as I would like these days.
Mushrooms are prolific here too. I wouln't eat a non-grocery store shroom for anything. We probably have 15 varieties on the mile walk we often take with our dogs.
Nice post Ronni - you conveyed the pace of your day very well! I can relate.

We have found ourselves going to the 1030 early show here. The Way was very moving and we will buy it when it comes out. Tower Heist was slapstick that left us laughing. Yesterday's J Edgar Hoover film left a dark, bad taste in our mouths.

It's been a fun but expensive jaunt out into the visual world.

We have a little movie theater like yours in Florida and I went to a matinee a few years ago and there were only 6 patrons (all women)at the 1:00 P.M. show.

The film was Robert Altman's Gosford Park. It had a cast that included most of "Who's who in British Filmdom" and was said to be a comedy-mystery.

Well, we didn't laugh too much and no one solved the mystery. Actually,no one was able to positively figure out just what the mystery was.

When the film was over and the house lights came up, all six of us stood up and looked around at each other for guidance.

I broke the ice with "Well, ladies, shall we adjourn to the lobby and discuss this film?"

That is exactly what we did and it was fun because no two people had the same impression of the plot or the murder or was it murders? No one was positive so we all agreed to disagree on the plot.

We did, however, agree that it was a comedy because we had so much fun discussing it and the mystery was... trying to figure out what the H the whole thing was about.

As far as political movies go, one of my favorites is The American President, which of course is really a love story.

Another of my favorite "political" movies is Dave, which of course is really a love story.

I never get out to the movies anymore. I suppose I am film illiterate. Thanks for the tip about the new Clooney movie.

Ronni, you could easily add "photographer" to your list of professional skills!I'm a klutz with a camera, but your pics are lovely.

Aw shucks; now you've disappointed me because I was so looking forward to the Ides of March. I love George Clooney and the previews looked so good.

Your photos of the Fall colors made my day. That's one of the few things I miss living in Arizona - the changing colors of the leaves.

Here in Italy, it's hard to get English speaking films so I depend on movies online. They're older but sometimes those are the best.

Elizabeth Rogers...
I just point the little camera and sometimes I fuss a bit with cropping and enhancements but not much. At The Elder Storytelling Place, there are some really good photographers. I just point and click.

Darlene...
I'm sorry to disappoint you about The Ides of March. It's not a terrible film. All the actors are well-known professionals who do their jobs well with what they've got to work with - which isn't much of a script and some plodding cinematography.

There are a lot worse movies and it's entertaining enough for a couple of hours. And, of course, that's only my opinion.

Beautiful photos - thanks for taking and sharing them. Love looking at Cloney but that doesn't sound lie a movie I'll spend my dollar on.

Thank you all for saving me money on the movies I thought I might like to see
...
J. Hoover and The Ides of March

Ronni--What do you mean, you've "never succeeded"? My socks are regularly thrown all over the place by the impact of your postings.
Beautiful leaves!
The last movie I saw, if I recall correctly, was "Sixth Sense" - to which I would never have gone had I not been dragged there, because 1) I don't care for most fantasy and 2) it was so obvious what was going on that it was boring.

Yeah, we went to a movie on our recent visit to Seattle, and I can't remember a thing about it.
Meh!

I have always enjoyed your photo posts!

Your photos are stunning. Glad to see you have beautiful color there in the fall, too.

I don't go to many movies, and I am always so disappointed when they turn out to be less than I thought.

I could have written the post by SuzyR..2 of my favorite movies are American President, and Dave----I have watched both MANY times, and always love them!

Actually, for me, the great majority of your posts are Brilliant Posts.
I loved your introduction and your beautiful photos that made me nostalgic for U.S. falls and falling leaves.
Once again, thank you.