Home About Archive Contact
A Sane Proposal for Jobs and the Economy
ELDER MUSIC: 1970 Part 2

CHRISTOPHER HITCHENS – 1949-2011
War reporter, polemicist, atheist, essayist, troublemaker and all-around brilliant wit who, whether you loved or hated him, was more fun to read than any of the next 250 best writers we have died Thursday in Houston of pneumonia although the underlying cause was esophageal cancer.

Christopher Hitchens was only 62 and I sure will miss him. There are obituaries and tributes all over the web and there are sure to be more. Two of them are here and here - well worth reading.

FACTCHECKING INTERNET RUMORS
Good old, reliable factcheck.org has given us an end-of-year list of the internet rumors they have most frequently been asked to confirm or debunk. You know, stuff that shows up in your inbox like:

• Will the Obamas do away with the White House Christmas tree?

• Did President Obama have his dog, Bo, flown to Maine in his own private jet for the family vacation?

• Is the ACLU suing to have cross-shaped headstones removed from military cemeteries?

You can find the answers to these and whole bunch more at factcheck.org.

WISCONSIN IS AN INSPIRATION FOR US ALL
Those Wisconsin voters don't give up. Remember last winter in sub-zero temperatures when day after day up to 100,000 citizens marched to protest Governor Scott Walker's busting of the public workers union.

The demonstrators vowed to mount a recall of the governor and this week, they announced that they have neared the required number of petition signatures, collecting more than half a million in just 28 days. Look at these stats from from Politiscoop:

Now that's a Wow. Only 540,208 signatures are required to trigger a recall election, but they're going for 720,277. Here's the announcement of the petition's success from earlier this week (hat tip to Bev Carney).

The big guy in a red suit IS an elder, you know, and the folks at Creating Results have compiled some little-known facts about St. Nick that, of course, apply to you and me too. Such as:

• Half of Americans 65 and older have arthritis

EPHEMERAL NEW YORK
Thanks to TGB reader Elsa Louise, I now know about a fantastic blog called Ephemeral New York where I have been spending many hours reading, looking and following links.

Like this story about the Women's House of Detention. When I first lived in Greenwich Village, the prison was still on the corner of Sixth Avenue and Greenwich Avenue. 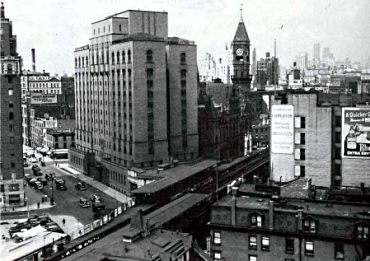 ”Modern and bright (WPA murals lined the walls), it focused on reforming the inmates, often charged with prostitution.

“There were some illustrious inmates, held for other crimes, like Ethel Rosenberg, Angela Davis, and Valerie Solanas, who shot Andy Warhol in 1968,”

writes the anonymous “magazine editor from the West Village” who runs the blog. It is packed with priceless information, stories and images about my favorite city. If you too love New York, you'll fall further in love after hanging out at this website for awhile.

ASSHOLOCRACY
LanguageLog is a terrific blog I subscribe to about, well, language, written by a dozen or more mavens. This week, one of the founders, Geoffrey K. Pullum, took up the topic of the word in this headline as a strong candidate for word of the year from the American Dialect Society.

”I had been talking to Calvin one day about the ghastly crew of obnoxious multi-millionaires who dominate the newspapers,” write Mr. Pullum, “and how they keep threatening to achieve success even in the political arena.

“Calvin pointed out to me both that we need a new political term for the concept of being ruled by such men, and that there already is such a term. We are living, he observed, in the age of the assholocracy.”

“Such men,” Mr. Pullum goes on to explain, include Donald Trump and I'm sure we can all agree that in the U.S. at this moment in political history there is a bumper crop of others for whom the word assholocracy was invented - “a terse and valuable addition to the vocabulary,” as Pullum asserts.

You can read more of this story at LanguageLog.

HOW TO WRAP A CAT
I had no cat videos for Interesting Stuff last week but today we are making up for that omission thanks to three TGB readers who have filled the void magnificently. This first one from Jan Heigh fits the season. (No way would my Ollie the cat sit still for this.)


LUKE THE CAT TAKES A SHOWER
Luke looks a lot like Ollie so he's probably a Savannah cat. The breed is supposed to like water, but no one told Ollie about that. (You might want to turn off the audio; the music is awful.) (Hat tip to Sandra Mosley)

You were right, of course. I loved it!

Another great start to the w/end thanks to you & the wonderful cat videos. :)Dee

Shower-cat-Luke reminds me of a boss I had whose cat liked to take showers with her (it also liked to chew rubber bands).

I laughed so hard at that last kitty determined to stay on her back no matter the pose. Lovely stuff, all of it except loosing that powerful voice.

We will all miss Christopher Hitchens and his pithy writing.

My legs hurt watching the limber girl doing yoga. I could identify with the cat more than her.

I always thought Hitchens was annoying and abrasive on TV but what a wonderful writer he was. It is appalling though how the believers he annoyed when alive are now popping out of the woodwork to get their own back.

Thank you for introducing me to LanguageLog. I, too, am a Verbivore, as Richard Lederer calls us. This log is delightful.

NPR had a great interview with Mr.Hitchens on "Hitchens: How Paine's 'Rights' Changed the World" that I have just been watching/reading. Believe you would enjoy this one, if you haven't already -- www.npr.org/templates/story/story.php?storyId=15328527

Is this your new blog? I didn't know that, but I see you haven't
updated it since September....

I kind of agree with you about Hitchen's TV persona - but what a
writer! and what passion - great to see whether I agree with him
entirely or not.

Christopher Hitchen's will be missed.

What's not to love about cats?

Loved it all!!! I will be incorporating 'assholocracy' for Trump et al -- and yes, the LanguageLog will be a new stop in my travels. Toure gave a lovely eulogy for Hitchins on Dylan Ratigan's show -- I shall miss his wit and wisdom. The cat features were tres cute -- almost enough to send me out to get a kitty of my own except my landlord says no.

Happy to see Ephemeral New York on your Saturday listing for this week. Would that everyone should have the chance to visit this marvelous town in person! If such cannot be arranged, however, then this virtual tour offers a fine substitute.

I'm not a huge cat person, but what wonderful cat videos you find!

I love the factcheck.org site and use it regularly. Another great fact checking source is Politifact.com. Their "Pant-on-Fire" link always seems to have a high percentage of conservative errors.