Home About Archive Contact
The Legends of Santa Claus

Ollie the cat, snoozing on the desk next to the laptop yesterday morning, woke suddenly – and grumpy about it, too - when I burst into laughter at this image that arrived in an email message: 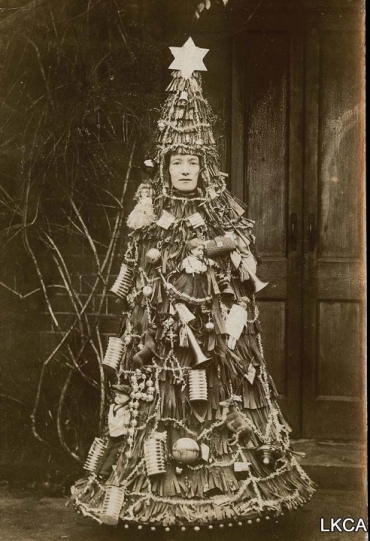 Clearly a Christmas tree costume but with a star of David on the top rather than the usual five-pointed Christian star.

It was sent, in response to my Hanukkah greeting, by TGB reader, John Baeder. John doesn't know what the provenance of the photo is – just something he had tucked away for amusement value sometime in the past. Whatever do you suppose it could be about.

John's name seemed familiar to me and when I poked around the web, I found that he is an artist associated with the photo-realist movement well-known for his paintings of roadside diners and I must have recognized his name because I have his 1980's book, Gas, Food and Lodging.

This is one of John's paintings of the Empire Diner where I ate lunch fairly frequently over the years in New York City and now, sadly, gone. 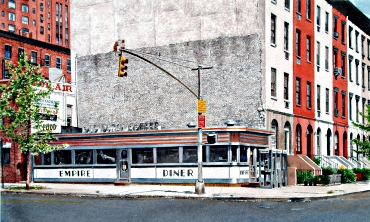 There's no telling who you can meet online via a Hanukkah greeting or a funny Christmas costume. You can find out more about John and his work here and here.

Television, this week, is devoid of nearly everything except Christmas movies so I checked out montages of them at YouTube. Most aren't very good and they all include clips of Will Ferrell as Elf and that creepy Home Alone kid. Am the only person in the U.S. who can't stand either one of them?

Anyway, here is one that is tolerable.

Having nothing to do with Christmas, this is way too good to pass up - Republican presidential candidate Jon Huntsman playing keyboards - Johnny B Goode with the Letterman show band Wednesday night. And he's pretty good, too. Take a look:

I hope the holidays are good to you and yours. I like one holiday movie especially named appropriately The Holiday any time of the year (great cast and Eli Wallach is at the top of the list for what makes it a delight). I only have seen one Christmas movie on television as I came across White Christmas.

Oh, thank you for the item on John Baeder. He's a long-time and very good friend of mine from the 1960s in Atlanta.

John is a fabulous photographer, too. And I have a large photo that he took of my daughter as a baby hung on my wall, along with many others he took of us.

So great to see someone still recognizing his immense talents... and his wild sense of humor!

Yes, the regular favorites are gone. Darn. Yes, John Baeder is a marvel. :) Thanks.

Ronni--Truly, Jon Huntsman's Johnny B Goode rocks! Thanks for the posting.

Hey Huntsman is great! Maybe he & Clinton could make it a duo! As for the movies on TV, I'm with you, but I still like Miracle on 34th St. & also A Christmas Carol with George C. Scott.
Wishing you & yours a happy holiday & prosperous NY. :)Dee

John Huntsman not only is talented on the keyboard he is the only Republican candidate with a little common sense - which is why he will never be the candidate.

Thanks for the laugh and the Christmas montage.

Don't know about the US but if you were here in Italy with me, you would NOT be the only one. Once again, thanks for your post.
Buon tutto.

And here I thought I was the only one - thanks for letting me know I'm not.

MERRY CHRISTMAS to you and Ollie the Cat from all of us: John, me, Tippi (our lovely Maine Coon) and Bo (the beautiful longhaired black cat who adopted us 7 years ago).

Merry Christmas and the best of the New Year to you and yours, Ronni. Your daily missal is truly a gift to all of us. Thank you for the Christmas Tree costume at the top...Sometimes I certainly feels like commercialism of the season feels like that!