It's an odd little season, this week between Christmas and the new year. A feeling of disconnect, a neutral period between past and future, a hanging moment for a few days when our concerns – personal and public – are held in abeyance while our planet's most recent circumnavigation of the sun winds down and the next begins.

Even when I was still working, work seemed futile. Many people save vacation for this week so that phones and email go unanswered, meetings evaporate for lack of attendance and information for pending decisions can't be found.

Although retired now, I feel a similar sense of suspension and a strong disinclination to do anything of substance. I feel a whiff of melancholy about this period but I couldn't tell you over what and anyway, it's not serious; it will pass.

Most of the world is on hold for a week or ten days and the media spend this time adding up the events of the passing year, putting them in a semblance of order and, of course, predicting the events of the coming year.

I always mean to go back and see how last year's predictions turned out – I thought about that as I started writing this post – but I am too lazy today to make the effort. Maybe next year.

Newspapers fill a lot of space with – well, filler they have undoubtedly written well in advance of this politically becalmed week. My favorite this holiday was a delicious story at The New York Times on the chocolatieres of Brussels: 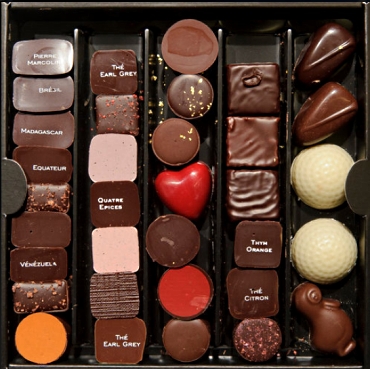 The reporter delivered about 2300 words on the chocolate district of Brussels and included a handy map of the dozen or so shops along with a spectacular slide show of all things chocolate in the Belgian capital.

The political air is relatively quiet. According to Roll Call's calendar [pdf], the second session of the 112th Congress will not convene until 17 January, the day after Martin Luther King Day, and I was further surprised to see that the Senate will meet for just seven days in January; the House for only six.

That seems too few by a large margin considering the important issues on the table including (among others) the short extensions of unemployment insurance and the payroll tax holiday that expire again at the end of February.

The first New Yorker cover of 2012 is equally dispiriting to contemplate... 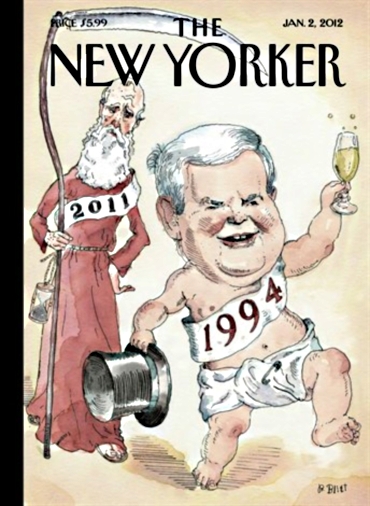 ...but I am feeling too lethargic to work up any high dudgeon over it or Congress right now. Even so, it makes one long for some warm and fuzzies, so from my friend John Brandt, here is Spike the Pit Bull vs. Visa the Kitten.

Thank you again for making my day brighter with that wonderful video. Smiling all the way to my next cuppa'.

What a brilliant description of the week between Christmas and New Years.
Barbara

I'm enjoying this time of drifting, hadn't thought about how widely its shared.

Enjoyed the video and sequel. I also should mention I really enjoyed the "Simon The Cat" video from Saturday. Must have watched ten different ones on YouTube after seeing the one you posted... laughing all the way!!!

I just enjoyed feasting my eyes on all those luscious chocolates and taking that slide show tour.

What a great way to start a lazy morning!!

Certainly cute, definitely not restful, a little alarming. Pitbull vs kitten, that is.

Happy dear and boring week to you too. I'm off to run errands, pull out my water colors, and clean out my freezer. It's going to be a really good year.

The week between Christmas and New Year is just one long blur to me. Having a birthday between the two big holidays has always been the bane of my existance and remains so ... in 3 more days I celebrate my 75th birthday.

During my entire childhood I only got gifts under the Christmas tree saying "Merry Christmas and Happy Birthday"! Can only remember one real birthday party - my 16th when Mom threw a small party for 4 friends and me.

Parents should consider this if they have a child born in this strange week ... sighhh

This strange week is the season of what we call in this house the "East Armpit" Bowls -- televised football games between anonymous college teams that didn't quite play up to expectations or hopes.

I'll be working this week ... lots to do, even with most folks out.

What a great video. I hope they remain friends.

If I had owned those two animals I would never have let that Pit Bull get close to the kitten. I guess the owners know their animals better than I do. It was cute to see the interaction and how they seemed to enjoy the play so I guess all's well that ends well.

You are so spot on about this week!
I always mean to "get a lot done," and just don't. Just going to enjoy it.

Haven't seen the video yet. My iPad won't show it. Have To go to my study, gasp, downstairs and turn on the computer.

I opened your blog post while waiting (no doubt fruitlessly) for phone calls to be returned so I can get something done today at work. Too bad for me. It's just like you said -- work seems futile.

I woudn't mind fewer days in session by the House and Senate if it meant the members had to go home and live like, and listen to their constituents. But, I'll bet they won't.

Betty...
Regarding Congress members living like their constituents: not a chance. This from the Washington Post on Monday:

"Over the same period, the wealth of an American family has declined slightly, with the comparable median figure sliding from $20,600 to $20,500..."

I just loved the pit bull-kitty video. Thanks for brightening things up around here!

Your post has aptly described those days between Christmas and the New Year. This time does seem to drift by. It feels like an aimless fog sets the world into a dream-like state. I'm just going with the flow and enjoying the feeling of living in a suspended time warp.

I live alone and family is far away. Work & financial woes keep from flying to see them on the long Xmas or long New Year's weekend. I admit it: I yearn for connections with those I have deep, emotional ties & history with. I often feel too blue to volunteer at homeless shelters on holidays, so afraid am I of not be able to put on a happy face for those who need it. This year I was too stressed with work issues to have much time to think about being alone. But then I stopped and thought about my parents and childhood holidays, and I let myself cry for a few minutes, just out of purely missing them to pieces. And then I was okay. Maureen Dowd's column the other day about Charles Dickens's last Christmas reminded me that these holidays *are* different for those of us who are older. I believe it helped me.
I opened up a few presents from relatives and just felt pure delight at each one, at the idea that they went out and picked things out for me, wrapped them, and sent them on. I like to think "things don't matter, people do" but you know, a card in the mail, a cheerful e-mail, a present--those things do help. I lit candles given to me one year by a dear friend who died last year. I decided that would be my new ritual. Thank you for letting me ramble here. I appreciate this place more than I can say. I sometimes feel my thoughts and feelings are just too petty to post anything, but I do appreciate all of you. Happy 2012 to you alll, and Happy Birthday to those whose birthdays are in this netherworld called last week of December.

We spent more time than we should have wishing the kids would call to wish us a Merry Christmas. Finally, they all did - just in their own sweet time. 'Went down to the Community Center to serve the holiday meal to 500 folks who decided they didn't want to (or couldn't) cook and who would rather socialize with like souls. There was something wonderful about seeing the Christmas sweaters, crazy earrings and religious ties. Once again, I was reminded that those of us who did not have family were not truly alone.

Sort of an un-holiday for me this year. Just never got into the spirit. Didn't even bond with the Christmas tree that my husband set up and strung with lights, which is how it stayed and, therefore, will be ever so easy to take down!

This pit bull and kitten made my week. I'm putting this on my FB page. Thanks, Ronnie. And thank you for the extra boost in hits at my blog this week, due to mine popping up on your list. :)