Well, after a month of dead musicians, silly Christmas music and my waffling on about what I collected 40 years ago, it’s time for a bit of couth. Some fine (and one just so so piece of) music. Don’t worry, I’ll be back to normal next week.

I'm not a religious person, indeed, I consider myself an atheist. However, I will say that GABRIEL FAURE's Requiem is a wonderful piece of music. It's nearly up there with those of Mozart, Brahms and Verdi. 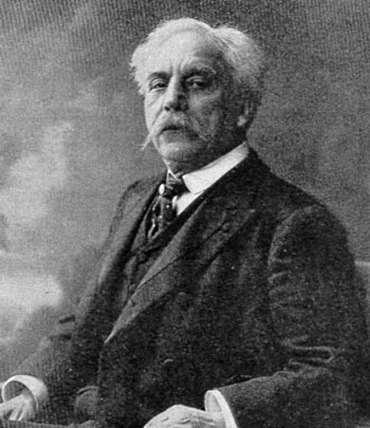 He wasn't commissioned to write this work He said it was "composed for nothing…for fun, if I may be permitted to say so". It may have been due to the death of his father in 1885. Some say it was for his mother's death two years later, however, he had already begun it by then.

It came out in dribs and drabs, initially as a work in five movements he called "un petit Requiem". He later added the "Hostias" and expanded the Offertory. Still later the "Libera Me" was added. In about 1900 he reworked it for full orchestra, the version that was given its premier that year.

He originally wrote it for a chamber orchestra and both versions are regularly performed these days.

Here we have the Sanctus and Pie Jesu from the Requiem. It sounds as if I know what I’m talking about but I’m just reading the back of the CD. Somewhere in there we have the wonderful Cecilia Bartoli and the excellent Bryn Terfel.

SERGEI RACHMANINOFF (or Rachmaninov or any other spelling variation you'd like) was born in Semyonovo, in northwest Russia. 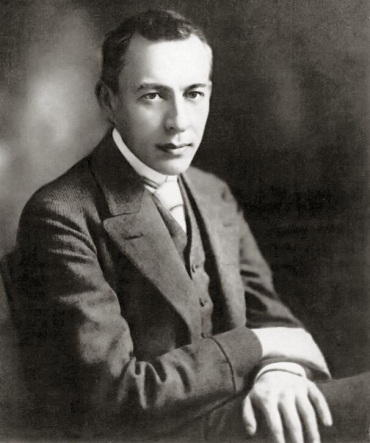 His mother gave him the odd piano lesson and his grandfather brought in an actual teacher from St Petersburg when he showed real talent. Even as a youngster, he demonstrated great skill in composition as well.

While still a student he met Tchaikovsky who became a bit of a mentor to him and he asked Sergei to write a piano transcription of a suite from his Sleeping Beauty ballet. Pyotr died soon after and Sergei wrote a trio in his memory.

Sergei was often inflicted with writer's block and he'd often go for several years without writing anything, then he'd come up with some excellent piece of music. Sounds like bipolar disorder to me.

He is most famous these days for his piano works and more particularly, his piano concertos, and it's part of one of those we have today. This is the second movement of the Piano Concerto No. 2 in C minor, Op 18.

EDWARD ELGAR was born in Lower Broadheath in England. 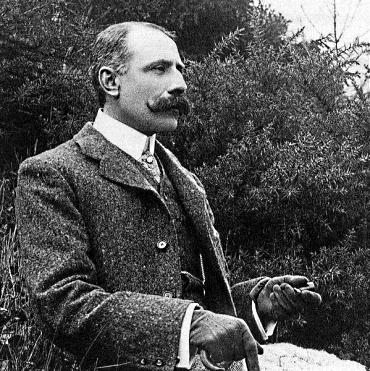 His father was a piano tuner and later set up a music shop that sold instruments and musical scores, so young Eddie was always surrounded by music

Although he had some lessons on piano and violin as a youngster, he was largely self-taught, at lease initially. He pretty much borrowed all the books from the library on music theory and composition and worked his way through them all.

He learned German as he wanted to attend the Leipzig Conservatory, however, his folks couldn't afford to send him there. He said later that it was the best thing that happened to him; he'd escaped the musical dogmatism of the school.

He wrote some fine compositions – The Enigma Variations, The Dream of Gerontius, Pomp and Circumstance Marches, several symphonies and concertos of various kinds. He was the finest English composer since Mr. Handel (or Purcell if you don't go along with interlopers).

However, his works are seldom played outside his own country. This is a shame. In my small way, I will rectify that just a bit. This is the third movement from his Cello Concerto in E minor, Op 85 with the great Jacqueline du Pré playing the cello.

I have been a bit naughty about ROBERT SCHUMANN in several of the columns I've written. 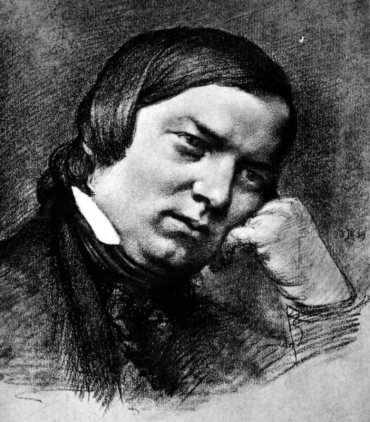 I never have liked him much. However, just yesterday I was listening to the radio and there was a piano concerto. Ooh, that's good, I thought.

I was a bit puzzled though. It wasn't Mozart, it wasn't quite Schubert, not Beethoven or Haydn either. I wondered who it was. Well, knock me over with a feather, when it was announced at the end, it was Schumann. Even more amazing, by a piece of synchronicity, I discovered that I actually had it.

I was looking for a piece by Grieg for this column and there it was on the same CD. I had never played it; I'd always just programmed the Grieg. Well, you live and learn.

Now that I have your attention, I'm not going to play any of that concerto as the movements are far too long. However, I wondered if I had any more of him. Okay, I'm lying to you because I knew I did.

As with that one, there are other works of his on CDs with other composers I prefer and this time they are vocal items. One, especially I like as it has the late, great Kathleen Ferrier singing his songs (as well as those by Brahms). She can sing anything and make it sound good. 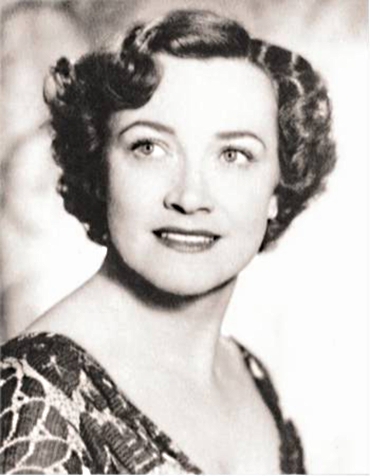 I'm going for one of those. This is Du Ring am meinem Finger. I don't speak German, but I think I know what we're talking about here. 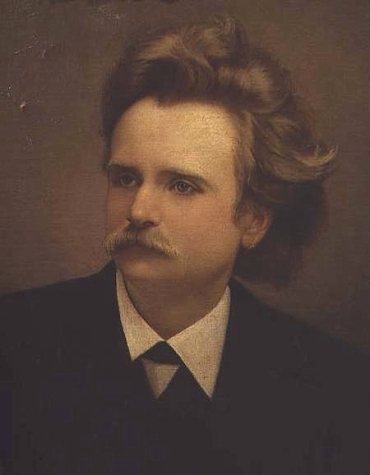 His mum was a piano teacher and taught young Edvard to play the instrument when he was six. He wrote his first composition when he was nine. Later, his folks were urged by a family (musical) friend to send him to Leipzig Conservatory. Edvard disliked the discipline there but he passed with flying colors.

Franz Liszt had heard of his work and asked to meet him. They met in Rome and Franz was very impressed with the young man's compositions, to such an extent that he played the piano at the premier of his piano concerto. Edvard thought Franz played it too fast.

The playwright, Henrik Ibsen, asked Edvard if he'd compose some incidental music for his play Peer Gynt. Eddie readily agreed and these enduring pieces are some of the most popular, not only of his music, but of any composer.

So, I'll go along with that. This is the first part of his Peer Gynt Suite No 1. This will bring a smile to your face on a Sunday morning, or any morning.

EDOARD-VICTOIRE-ANTOINE LALO was born in Lille in France in 1823. Imagine writing that first name on a form. 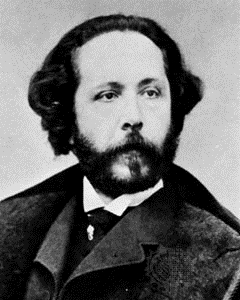 He studied at that city's conservatory and later at the one in Paris. He joined a local quartet playing viola and second violin, but not at the same time I imagine.

Eddie married an opera singer and she piqued his interest in that and he composed several of those. They weren't well received as they were a bit too “progressive” and we can't have that sort of thing.

One of these (Fiesque) didn't have its premier until a couple of years ago. He switched to writing chamber pieces and orchestral works as well as music for violin and piano. He really didn't taste success until he was in his fifties when his violin concerto struck a chord (sorry) with the public.

His works for cello, both concertos and sonatas, are especially fine. Here is part of one of them, the second movement of the Sonata for Cello and Piano. 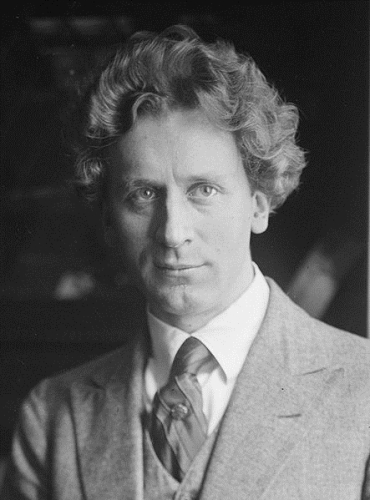 He was close to his mum. Indeed, he was very, very close to his mum. So much so that I won't go into any further details on this nice website. He was also fond of interesting practices that you only find on those "oh, I accidentally found this" websites, or so I'm told. We won't go there either.

He was probably the fittest composer ever. However, he did rather go over the top in that regard. Instead of driving or taking a train between gigs, he liked to run. We're talking mega-marathons. He was a vegetarian who was not particularly fond of vegetables.

Percy thought that the musical establishment didn't take him seriously as he didn't write any symphonies, concertos, sonatas, string quartets (or any sort of quartets or the like), operas or anything other else in such genres.

He wasn't a radical in the mode of Charles Ives or John Cage, although some his piano works are quite challenging. I don't like to side with establishment, but in this case I tend to agree with them.

Percy was born in Brighton (that's a suburb of Melbourne, the next one over from where I live) and when he was five, his dad took a sea cruise and never returned.

His mum took him to Europe in his teens where he studied music. At the outbreak of the first great unpleasantness he went to America. He eventually became an American citizen. You can have him.

He was fond of adapting folk songs and this is probably his most famous composition, Country Gardens.

Peter--What a wonderful cross-section you have provided, today. Thank you for the lovely selections.

What lovely selections you gave us today.Thank you..

You told us that Elgar's music was seldom heard outside of his own Country.

If you came to America in May of any year and went to any graduation from a Nursery School to Harvard Law you would hear Elgar's Pomp and Circumstance played over and over again as from 10 to 2,000 graduates march in to receive their diplomas.

By the time the last graduate is in his seat you are stuffing tissues in your ears to block out P&C...

I really look forward to your Sunday column and appreciate the time you spend preparing it.

What a laugh! I read "couth" as "south". Boy, was my blues boy excited, now your talkin! We thought we were going to hear the Allman Brothers, Charlie Daniels, The Molly Hatchet Band. Were we surprised to scroll down and see the selections from the "couth" ilk. We are still laughing at ourselves.

Thanks, Peter, for these terrific selections.

You're right, Peer Gynt did bring a smile, and it also made this cold, snowy day seem less wintery.

I had no knowledge of Percy Grainger, but Country Gardens is a familiar tune. I guess he's not the first oddball to make "pretty music."

Hi Peter, I live across the city from you - at Ringwood. I note your mention of Grainger and folksongs. I think his actual collection of folk songs - not just adaptation - is one of his great contributions to musical knowledge and has been put to use by others. Also think mention should be made of the movie about Grainger, Passion, with the wonderful Australian actor Richard Roxburgh playing Grainger.

Country Gardens was one piece I really enjoyed playing back in the day when I thought I could learn to play piano in spite of my small hands! Didn't know anything about the composer though, but he does come across like my hubby--IN THE VEGETARIAN SENSE, NOT THE OTHER WAY! Hubby, too, is a vegetarian not particularly fond of vegetables. :) Nice change of pace; thanks! Enjoyed the show.