IT TAKES A CAT...
...to know how to puncture human pomposity. We could put this one to good use on the Republican presidential campaign trail.

NICE BOOKSHELVES
Having spent the past couple of days assembling 14 feet of bookcases six feet tall and unpacking dozens of boxes of books, shelving is at the forefront of my mind right now.

I like these a lot plus they demonstrate my lifelong decorating solution: fill a room with books and you don't need to worry about color coordination.

UPDATE: These are NOT my bookshelves. The photo, which was unattributed, caught my attention - probably because that is what I am spending my time with these days. Sorry if I was unclear above. 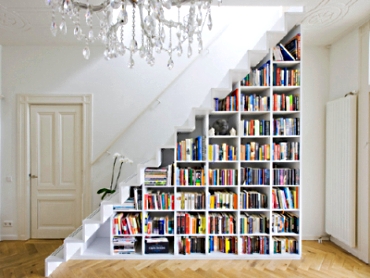 1911 BRITISH CENSUS DATA FINALLY RELEASED
The British government has just released previously protected census data from the year 1911. Heads of households who filled out the census form had some interesting ideas about what should be listed in the column headed “ailments and infirmities” of the people under his roof.

”The entries, given for the most part by people who would have had no medical knowledge, are often amusing, with some of the more unusual health conditions including old age, voteless, bald and being short of cash.

“A less politically correct age is apparent in the use of language - with 'lunatic and 'imbecile' both occurring in the top five most common ailments, along with 'feeble-minded.' “One record, written by John Underwood from Hastings, East Sussex, describes his children as 'quarrelsome,' 'stubborn,' 'greedy,' 'vain' and 'noisy' while he records himself as 'bad-tempered and his wife as suffering from a 'long tongue.'”

The report is a hoot. You can read more here.

THE MODERN WOMAN
There's a overload of cute in this video and besides having been shown on television, more than a million people have viewed it on YouTube. Doesn't matter; three-year-old Lua is a charmer.

SNOW CHURCH
According to inhabitat.com, for the past hundred years, the Bavarian town of Mitterfirmiansreut has built a snow church to commemorate a 1911 snowstorm that left people stranded and unable to travel for Christmas mass. 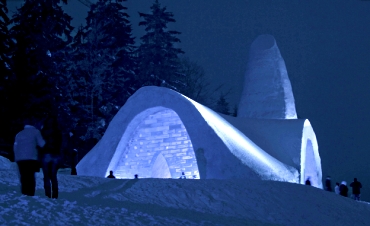 For this year's snow church, architect Alfons Doeringer gathered almost 50,000 cubic feet of snow to create the domed walls and interior of this snow church. The front steeple rises 62 feet in packed snow, and the entire building is 85 feet long and 36 feet wide.

You can read about it and see a slide show here.

TRACTOR JAZZ
In last week's Interesting Stuff we had cow jazz. This week it's three guitars accompanied by a tractor – yes, a tractor - in Sweden playing Sweet Georgia Brown and Bye Bye Blues. It's a whole lot better than you would guess from the description. (Hat tip to Nikki of Nikki's Place)

MEMORY LOSS BEGINS EARLIER THAN BELIEVED
I'm not sure if this is supposed to make us elder folks feel better about memory lapses or what. But according to a British study of 7700 civil servants over a 10-year period, our brains begin to fail us as early as age 45.

”A deterioration in the memory and thinking powers of the oldest volunteers might be expected, but in fact the researchers...found that the brains of even the youngest were already on the slide.

You can read more here if you remember to click the link.

DOG TEACHER
I am forever delighted at how human-like our furry friends can be.

CAT THIEF
Undoubtedly, some of you have cat stories to match that dog teaching a baby to play catch, but I think this video expresses well the basic attitude of most cats. They're just good a camouflaging it when it suits their purposes.

Great videos this time. I'd love to copy the tractor/guitar jazz band to send it to my Swedish neighbor.

Ronni--Love your bookcase installation! As to the aging brain: I can attest to my own brain having noticibly changed in my mid-40s. Everyone has good days and bad days; but, I could tell that I was not following technical conversations at work as well as previously I had done. Although I think my logic machine is still alive and well, my memory and attentiveness machines have not gotten better over the years!
I do note that my mind is sharper during the hours following my gym & swim sessions.

And good Saturday Morning to you too. Thanks for the laughter, if I remember.

Thank goodness for cats! Interesting about the early decline of reasoning in a persons mid-forties, now I have a reason for some illogical choices in my then,lol.

Good to know I was "losing it" 15 years ago...I thought so! haha
Ronni, I just wanted to take a moment to say thanks so much for your wonderful blog. I appreciate it very much. I love how there are no ads, how candid you are about things in your own life..and how you find the BEST "interesting stuff"! You wrote in a post below that Bill Moyers is a treasure. May I add to that...that YOU are a treasure!

The videos were fun to watch, including the one with the metronomic tractor.

Sounds like you could set up a lending library!