WHY THE ENGLISH LANGUAGE IS LUDICROUS
This is a clever explanation of why English spelling is so difficult for school kids. The presenter is typographer Edward Rondthaler. He was 102 when he made this video; he died in 2009 at age 104.

You can read a bit more about Mr. Rondthaler here. (Hat tip to Midori Barstow)

TISSUE BOX RECALL
Here's something you don't read every day. This metal tissue box has been sold at Bed Bath and Beyond online and in some of its stores since last July. Seems innocuous enough. 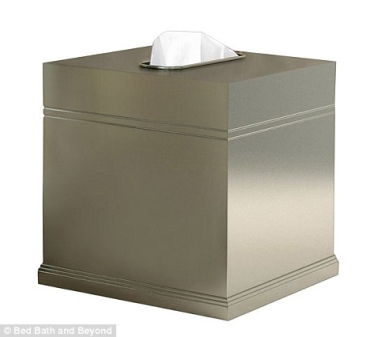 Innocuous, that is, until earlier this month when it was discovered to contain radioactive cobalt-60.

“...radiation alarms were triggered during a check of a truck at an inspection station in California.

“[A Bed Bath and Beyond spokesperson said,] 'The NRC has also informed us that the material is believed to be in the tissue holder itself and cannot be inhaled, nor can it contaminate other objects (such as tissues).'”

Although the tissues boxes are considered to be safe, they have been recalled and also pulled the shelves – physical and virtual. You can read more here.

FREE EYE CARE AMERICA
It's been going on for more than 25 years and I only just found out about it. You should know too.

Since 1985, Eye Care America has been providing eye exams and up to one year of care to U.S. citizens and legal residents within the continental U.S, Hawaii and Puerto Rico through volunteer ophthalmologists often at no out-of-pocket cost to those who qualify.

You must be at least 65 years old and not have seen an eye physician in three or more years. The exam covers diseases of the eye such as glaucoma, macular degeneration and cataracts. The service does not prescribe or pay for eyeglasses. 7000 ophthalmologists through the country who donate their time will waive co-payments and accept Medicare as full payment.

This is a wonderful and important service. The main website is here and you can find out more about eligibility here. There is no telephone service, only online application.

BILLMOYERS.COM
Not only has Bill Moyers returned to television, billmoyers.com is not just a show promo page; it's a full service website.

Videos of each week's shows are posted there along with additional material – videos and print stories - that there was not time to include on television. There are videos from his previous programs. There is a daily blog titled, “What Matters Today” and an “Anthology” where the body of Moyers' life work is gradually being collected. And there is a place where you can ask Bill Moyers a question; he will answer one per week.

It's a great educational site worth bookmarking and subscribing to. Also, it appears that the video of each week's episode of Moyers & Company is being posted to the website by mid-afternoon or so on Fridays.

BOOKSHELVES AGAIN
Last week I showed you an interesting set of shelves built under a staircase. This week, thanks to TGB reader, Cathy Johnson, we have a video from someone with way too much time on his or her hands.

I posted a similar video last March, but it has been removed from YouTube and this one is much more elaborate. Keep your eye on the wall clock.

WONDERFULLY ABSURD PAGE TURNER
Joseph Herscher lives in Brooklyn where he builds fabulously complicated Rube Goldberg contraptions. This one is a page turner:

The New York Times has helpfully provided a step-by-step explanation.

NETI POTS CAN KILL?
There is no end to the weird stuff that can happen in the world. First, neti pots are weird enough in and of themselves.

What? You never heard of a neti pot? It's a method of sinus irrigation. You can find out about them at WebMD and you can even buy a neti pot at Amazon and other online stores.

Now it has been reported that two people in Louisiana have died from fatal infections caused by neti pots causing the state health department to issue a warning.

”A 51-year-old woman from DeSoto Parish and a 20-year-old man from St. Bernard Parish, a suburb of New Orleans, died after using Neti pots containing tap water to flush their sinuses. Both became infected with Naegleria fowleri, a parasite known as the brain-eating amoeba.”

Ew. You can read more here.

AN IMPORTANT MESSAGE FROM ROBERT REICH
It will be a long, hard slog over several years but if Citizens United is not overturned, American democracy and its ideals, however flawed they may be, are doomed. This is Robert Reich's latest animation.

STATIC DOG
Hat tip to Rachel Eggleston for this great animal video that needs no introduction.

I loved the Edward Rondthaler video. It reminds of a simlar message on the English language when I was in college.

The spelling of PHOTI can actually sound like the word FISH is you take the "f" sound of "PH" used in the spelling of Phoenix, the short "i" sound found in the letter "o" in WOMEN and the "sh" sound taken from the TI in words like NATION.

That crow is amazing! So is the page-turning video (I watched more of his videos on his website). Edward Rondthaler's explanation of the absurdities of English was terrific. The electrified dog was fun.

Regarding the Neti pot, I haven't used one, but I have used the NeilMed sinus rinse bottle (boil the water; wash and rinse carefully, etc.). My allergist recommended it, and it's been helpful. The amoeba story does make me squirm though.

Loved them all! I had not seen that Robert Reich clip yet, so thank you. I need to visit his website moe often. I have been a big fan of his since reading his "Work of Nations". His more recent "Aftershock" was very convincing, too. His message seems so obvious and intelligent, yet it doesn't seem to receive the attention it deserves. It's things like this that leave me more discouraged about what lies ahead. Thanks for the uplifting videos to lift me out of the doldrums.

That page turner is a real Rube Goldberg contraption.

The dog could use static cling.

I have signed up for Bill Moyers news letter. Thanks for providing the link.

Got a kick of everything in this post and even shared with my grandson, who loves gadgets and is struggling with reading the English language.

You're supposed to use distilled water in a neti pot -- or at eat boil the water first. I use a Nasaline Irrigator, which I like a lot better. (Amazon has them as do drug stores.) Also, I rinse the pieces with alcohol when I'm done each time. I have a terrible sinus problem, and using the irrigator really helps.

Ronni--Thanks for posting the "Amend2012" video. I am 100% in agreement with the need to undo the damage that the Supreme Court has done to our way of government.

Bottom line on Neti pots (which were suggested to me by two different doctors) is to sterilize the pot and use water which you have boiled and cooled for the irrigating.

Um...does anybody else think the crow is using a contraceptive diaphragm for its snowboard...? LOL

Ali...
Several people at YouTube think it's a jar lid.

Speaking of too much time, you might like this -- What books do in the bookstore at night:
http://www.thisiscolossal.com/2012/01/what-happens-in-bookstores-at-night/

And good grief I HAVE that tissue holder!!

Not to repeat myself, but... LOVE your Saturday Interesting Stuff posts! :)