[ATTENTION: Those of you who read this blog via email or rss need to click on the title of the story so it will open in your browser where you can view the videos.]

“OLD AGE” COMEDY
This young standup comedian is barely 30 years old, but he's nailed the weight gain problem that comes along with age. His name is Andy Woodhull and you can read about him here.

COWS AND A DOG
Nothing really funny here. It's just sweet and it's always interesting to watch different species trying to figure out each other. This is a herd of cows indulging their curiosity about a six-month-old boxer puppy.

HORRIBLE. HORRIBLE. HORRIBLE.
It's apparent that this year's election campaign is going to be one of the nastiest on record but this race for the U.S. Congress is already so out of hand that someone needs to go to jail.

Here is the description from Blue Arkansas earlier this week with an image. Warning: both are hard to look at at. (Jake Burris is the campaign manager for Ken Aden who is running to represent Arkansas' 3rd District.)

”Last night, Jake and his four kids had come back to their Russelville home. As they were getting out of the car, one of his children discovered their family cat dead on the front porch.

“One side of the animal's head had been bashed in and an eyeball was hanging out of its socket. But there was something even more horrifying to be found on the corpse.

“Written across the animal's fur in black marker was the word, 'LIBERAL.'” 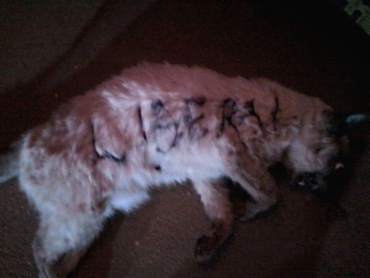 People will say this is an isolated incident. You can believe so if you want but people always say that when something awful happens. You can read more about the cat murder here and here and here or just search it: "jake burris cat"

THE WINDY CITY JITTERBUG CLUB
Does anyone under age 50 dance the jitterbug anymore? This is terrific. (Hat tip to Darlene Costner)

PROPOSED NEW KIND OF WIND POWER
Wind power doesn't degrade the environment the way mineral power sources do, but they still cause a lot of damage – birds and bat kills come to mind – and the constant whir, if you live nearby, can be hard to deal with. The esthetics are less than ideal too.

Now comes a New York design firm with an idea for “windstalks” that, like the blades we use now, generate electricity when the wind sets them waving but are completely silent and less likely to be lethal to flying animals. 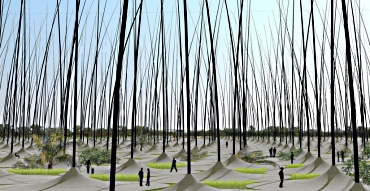 ”Each base is slightly different, and is sloped so that rain will funnel into the areas between the concrete to help plants grow wild.

“These bases form a sort of public park space and serve a technological purpose. Each one contains a torque generator that converts the kinetic energy from the stalk into energy...”

Who knows if windstalks will prove to be a viable energy source, but it's an interesting idea. Read more here.

I CAN'T WAIT TO SEE THIS MOVIE
Robot and Frank stars Frank Langella as an aging, retired jewel thief with his new caregiver, a robot. Plus, the always excellent Susan Sarandon as the love interest. Since I haven't seen it yet, I'll quote Tim Wu who viewed it at the Sundance Festival this month:

“The movie asks whether being truly alive depends in some sense on having a working memory. And the film hits a nerve when it makes clear just how much easier it can be to love our machines than our family members, especially when the former are programmed to help us, and the latter, seemingly, programmed to irritate.”

There are three more clips from the film here.

OH JOY, OH HAPPY DAY
Oh, that the whole world could be this happy. And the music is perfect - Jump, Jive and Wail by Louis Prima. (Hat tip to Heidi McBride)

CHEAP FLIGHTS SONG
This grows on you as it moves along and thank god for the subtitles because the Irish accent gets a bit thick at times. The singing group is called Fascinating Aida (terrific name), they've been around for a long time. You can read about them here and here. (Hat tip to Darlene Costner)

WOW OH WOW OH WOW: ONCE IN A LIFETIME
There can be no end of delight in cute kitties, but this gorilla footage raises animal enjoyment to nirvana. The video was shot near Bwindi National Park in Uganda. Note the man's expression at the end. Yes! Exactly! (Hat tip to doctafil)

You definitely should click in the lower right to watch this full screen.

Lots of interesting stuff, as usual, but I can't get the words or the photo of the cat out of my mind or heart. I am sick to my stomach. I can't help thinking about that poor family coming home to that horrible sight or about the sick minds of those who could do something like this.

You hit the jackpot today, Ronni. Wonderful post today except of course, the video about the cat. My long gone father always reminded me to "beware of zealots. They are most dangerous." Have a great w/end. Dee

I posted a thank you note but it seems to have vanished. The cat horrified me, but despite those moments, I still laughed.

The two dog videos and the video of the gorilla family ... wonderful!

A nice counterbalance to the dark side of life.

I can't imagine the person who would do that to a cat. They are probably on medicaid and SSI disability, but vote Republican.
And they got it wrong anyway, idiots. Cats aren't liberals, they're royalty.
The rest of my thoughts on this would need some foul language so I'll spare you all.

Loved the jumping dog and especially the gorillas! Amazing...

Oh my gosh!!! The dog/cow thing and then the gorilla thing! SO COOL! Thanks!