Home About Archive Contact
Making Peace with Death - A Contest For You
ELDER MUSIC: Class of 55

VIRAL VIDEO ELDERS
Remember the elder couple on YouTube last year who had unknowingly recorded themselves trying to figure out how to make their new webcam work? The video went viral. You can see it here as have 9.5 million other people.

Their names are Bruce and Esther Huffman and as it turns out, they live almost right down the street from me in McMinnville, Oregon. About ten days ago, they expanded their 15 minutes of fame by appearing with Matt Lauer on the Today Show. Bruce even played ping pong with Matt. Let's go to the video tape:

Visit msnbc.com for breaking news, world news, and news about the economy

ELDER ANIMALS
Tamar Orvell of Only Connect reminded me of Isa Leshko who has made it a project to photograph elder animals. Here is a short film about Ms. Leshko and her work.

The film was produced by Walley Films. It was shot in San Antonio, Texas and in Kendalia, Texas in May 2011. You can see some of the still photographs of elder animals at Ms. Leshko's website.

OLD AGE IN AMERICA
James Ridgeway is, undoubtedly, the pre-eminent of elders who are blogging about old age. He is a long-time political reporter, card-carrying leftie of the Village Voice, old Ramparts magazine variety and he currently contributes to Mother Jones magazine.

Last week he posted an extraordinary overview and distillation of what it is like these days to be old in America. An excerpt:

”In one exhibit on The Economics of Aging, researchers from Wayne State University presented a study published earlier this year called Invisible Poverty, which found that one in three elders – including many living in middle-class suburbs – cannot fully cover their basic living expenses, including food, housing, transportation and medical care.

“It also found that certain shortcomings in the way federal poverty statistics are compiled meant that poverty among older people was more likely to be underestimated. 'This widespread economic struggle faced by Michigan seniors is fairly hidden from public sight, making it an invisible poverty that takes its toll on older individuals, their families and caregivers and the community at large,' says the study.”

Go read the whole thing at Ridgeway's Unsilent Generation blog. It is the foundational statement for everything that comes next and for what we will be talking about here from now on.

JAZZ FOR COWS
Who knew? Who would have guessed? I wouldn't – that cows apparently like jazz. (Hat tip to Darlene Costner)

SEASON 2 OF DOWNTON ABBEY
Downton Abbey is a British historical drama set in a fictional Yorkshire country estate beginning in the late Edwardian era. I discovered it last year by accident and was hooked for all four episodes.

Season two begins tomorrow, Sunday evening, on PBS (check your local listings). It has expanded to seven episodes this year covering the period from 1916 through World War I. It's certainly on my short, must-watch list. (I so appreciate the DVR so I'm not tied to TV at specific time.)

If you are interested and missed season one, you can catch up. PBS is making those initial four episodes available online here for a short period of time.

MYSTERY WRITER P.D. JAMES AT AGE 91
I haven't read P.D. James in a long while and I don't remember if it's because she hasn't published in awhile or I haven't kept up. But it gives me hope to know she continues writing at age 91.

If you are guessing from the title, Death Comes to Pemberley, that her newest novel is less Adam Dalgliesh and more Jane Austen, you would be correct.

The time is six years after the close of Pride and Prejudice. Mr. Darcy and Elizabeth Bennet are happily married and living at Pemberley. Here is an interview with Ms. James conducted at her home last October.

MISSING NEW YORK
I could bore you or anyone else for hours about the reasons I love New York City and miss it all the time. One thing is how much high - and low - culture is there that is available nowhere else in the U.S.

This one happens to be high culture – the new Islamic wing at the Metropolitan Museum of Art that opened last October. One of the treasures is this 14th century mihrab or prayer niche: 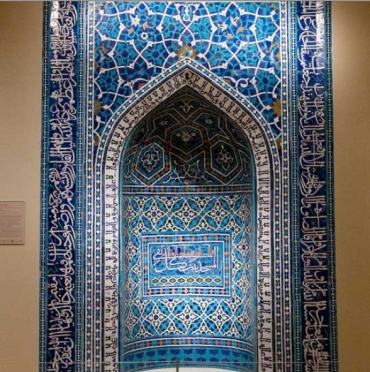 It pains me that I can't visit the exhibit itself, but The New York Times has published a remarkably good interactive section showing some of the rooms and artifacts in the new wing. You can play around with it here.

EQUAL TIME FOR DOGS
A lot of cat videos are posted here and Tarzana emailed recently to request equal time for dogs. This is the video she included with her note. I've seen it several times before but it always amazes me that the dogs can learn to surf and skateboard and, apparently love doing it.

Here's what I don't understand: why are all surfing/skateboarding dogs this one breed? Has anyone ever seen a lab or a standard poodle or a golden retriever doing this stuff? How about a dachsund? Oh, I suppose their legs are too short.

MORE EQUAL TIME FOR DOGS
This video was shot at Zuccotti Park during the Occupy Wall Street demonstrations in early November. I just love it when different animal species seem to show a friendly curiosity about one another. It's particularly fun to watch when they are of such disparate sizes.

Next week, cat videos will return to this Saturday posting.

As usual, a super way to start the w/end. Also totally agree about PBS & Downton Abbey. Those Masterpiece shows are the highlight of my weekly entertainment & never fail to please. And so good to see Elizabeth McGovern again.
What fun to see the "doggie" videos. The last with the horse & small dog is so endearing. Starting another w/end with a smile because of TGB! Have a nice w/end. Dee

My partner is reading the PD James book that is a take off on Jane Austin. She is a long time PD James fan and she says: "If you are fond of PD James, skip this one." In her time, she was an enjoyable writer.

Regarding all surfer dogs being the same breed......check out Surf Dog Ricochet http://www.surfdogricochet.com/Welcome.htm.
a Golden Retriver who surfs with/for people with disabilities. The video there says it all.

I'm so glad the cows came right after the elder animals. And the update on the couple with the webcam was delightful. Now on to reading more about the report on elders and poverty. Arrgh!

I love P. D. James, but her writing has deteriorated in her later mysteries. Her early Dalgliesh books were her best.

I am hooked on Downton Abbey also, but have a conflict on Sunday nights because I am also hooked on the Good Wife. Why have they put my two favorite TV shows on at the same time?

I loved the video of the NYC policeman's horse and the little dog. It looked like the little dog was telling the small girl to 'back off' this is my horse. He seemed to put her in her place.

Interesting to note Ridge- way's comments on the study by Wayne State University researchers showing the largely hidden and understated poverty among elders in Michigan.

With this information at hand, or presumably easily found, the Michigan governor and legislature canceled long-standing income tax exemptions for most senior pensions, although they did continue to exempt social security payments. They also modified tax exemptions that allowed many elders to stay in their homes by paying reduced or no real estate taxes.

Guess what. The governor is a Republican and there are solid GOP majorities in both houses of the Michigan legislature. Will this be an issue in the 2012 elections? You bet it will.

The elderly animals video is absolutely wonderful. How touching.

And yes, we too are engrossed in Downton Abbey here in Sweden! Believe it or not, we CAN focus on something other than Millenium! Ha.

Enjoy these as usual. Had seen some of them on traditional TV news -- got a kick out of the cows liking jazz. I recall in years past hearing music has been piped into cows (maybe other animals) to which they have a positive response.