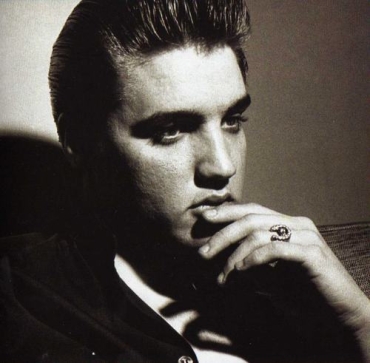 Last week we had my selections of Elvis tunes. Today is the turn of Norma, the Assistant Musicologist. The A.M. says about our choices:

“Well, we picked some from the same genres (Sun Sessions, Jailhouse Rock), just different tracks. And I threw in several of the big dramatic numbers because I figured you’d go for the rockers.”

We’ll start with the same record as last week, only the other side. The side that was the big hit. The song that changed music forever.

Heartbreak Hotel sounded like nothing else we’d ever heard when it came out," says the A.M. "But then, I didn’t like much of Elvis’s following pop period. It was only years later that I finally came across the early Sun Sessions – more to my taste. 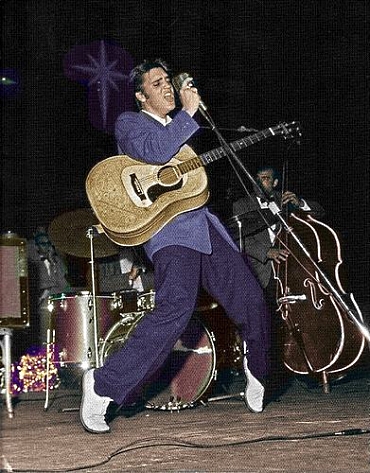 Speaking of the Sun Sessions, here is a track from that period. The song is one Junior Parker recorded earlier, also at Sun records. I imagine Elvis had heard Junior’s version but he rocked it up; it’s quite different from the original. It is Mystery Train. 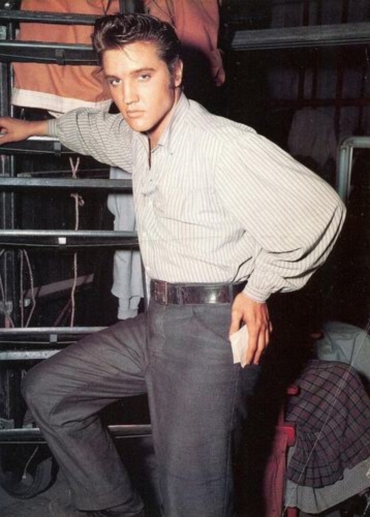 A song from one of his later films. Not a great flick – well, none of them were - but better than a lot of them. There are hints of acting talent in this one that was evident in his first few films, however, it was never allowed to blossom. Also, there weren’t many songs in it either but there was Flaming Star.

Now to one of our common genres, Jailhouse Rock. It seems my family wasn’t the only one with the EP of music from that film.

"In my case," says the A.M., "I was staying with cousins during school holidays when Jailhouse Rock came out and we played their copy of the EP to death for those few days." 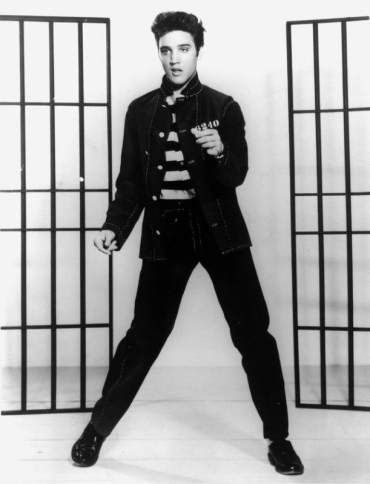 The way we’re going it looks as if we might get to play all the songs on that EP. Here is I Want to Be Free.

♫ Elvis Presley - I Want to Be Free

A change of pace.

"I had to throw in a couple of tracks from his high melodrama period," says the A.M.

High melodrama indeed. That would certainly apply to a song based on the song O sole mio. It was written some time ago, 1898, by Giovanni Capurro and Eduardo di Capua. The English words were written by Aaron Schroeder and Wally Gold.

It seems that when he was in Germany, Elvis heard Tony Martin sing There’s No Tomorrow, another song based on O sole mio. He rather liked it and told his publisher. The publisher got the aforementioned gentlemen to write new words and we have another hit, It's Now or Never.

♫ Elvis Presley - It's Now or Never

From high melodrama to perhaps low melodrama. Al Jolson had a hit with this song many years earlier and Elvis seemed to like that sort of thing. I was rather surprised when the A.M. chose it. The song is more like something I would have picked (but didn’t). Are You Lonesome Tonight?

♫ Elvis Presley - Are You Lonesome Tonight

Next are two songs that could be described as Americana although there may be some arguments about the first of these but that’s okay. That one is one of the biggest of his later hits, In the Ghetto.

♫ Elvis Presley - In The Ghetto

The next is attributed to Mickey Newbury, a writer of fine, if rather dolorous songs. He didn’t write the songs but he had the idea of putting three of them together to make an interesting whole. Elvis obviously heard Mickey’s version as he does a note-perfect imitation of An American Trilogy. 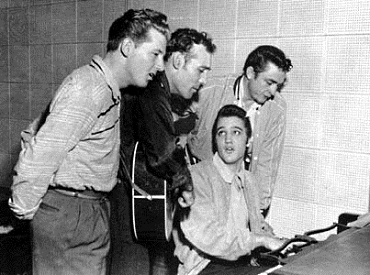 Here is some Gospelabilly music. If that term sounds unfamiliar to you, I wouldn’t be surprised as the A.M. coined it just today for this very track. It seems so obvious, we wondered if someone else might have thought of it already, but we don’t think so.

Back in 1956, five singers happened to be at Sun Records all at the same time and they gathered round a piano and started singing. One of them, Roy Orbison didn't stay, leaving what has now come to be called the Million Dollar Quartet.

They are Jerry Lee Lewis, Carl Perkins, Johnny Cash and, of course, Elvis. Sam Phillips had the foresight to have the tapes rolling and this improvised session was captured so we can all hear what went down that day.

Here they are with the old gospel song, I Shall Not Be Moved.

♫ Million Dollar Quartet - I Shall Not Be Moved

I’ll finish as I did last week with the common song, the one on both of our lists, His Latest Flame.

"We obviously think it’s good enough to listen to twice," says the A.M.

I especially enjoyed these three classics: It's Now or Never, Are You Lonesome Tonight, and In the Ghetto.

It was fun to hear the Million Dollar Quartet go at it on I Shall Not Be Moved.

Gospelabilly ... now that's a good term for it.

I've just been listening to Leonard Cohen. If you haven't done anything on him, might you consider including him at some point? Thanks.

I listened to "His Latest Flame" three times last Sunday and three times this Sunday. Thank you both for this treat. I look forward to these very enjoyable Sunday surprises and treats.

SuzyR, Lennie has been written and is ready. He’ll be coming along soon.