[PERSONAL NOTE: I am mentioned, with a photo, at The New York Times today in a story about living alone by Steven Kurutz.]

WRITTEN IN A CAREFREE MOOD

Old man pushing seventy,
In truth he acts like a little boy,
Whooping with delight when he spies some mountain fruits,
Laughing with joy, tagging after village mummers;
With the others having fun stacking tiles to make a pagoda,
Standing alone staring at his image in the jardinière pool.
Tucked under his arm, a battered book to read,
Just like the time he first set out to school. 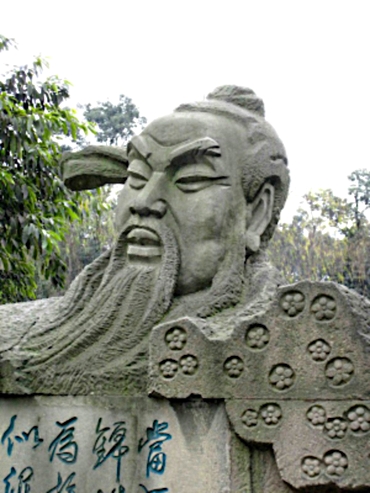 [The image is taken from a personal blog, Bill's Chengdu Journal, written by Bill Hawkins. It has not been updated since 2007. According to Bill, this detail is from a statue of Lu You in the Plum Blossom Garden of a park in Chengdu, Sichuan Province in China. It is said that Lu You wrote 10,000 poems.]

At The Elder Storytelling Place today, L.B. Woodgate: Hey. I Worked Hard for This Look – No Shame in Growing Old

Ronni, I loved seeing you quoted and a photo of our gorgeous punim (Yiddish: face) in today's NY Times! The hair, the shirt, the smile, the ambiance: perfect. The only one element missing/wrong: No Ollie (this time). XO

And there in the column, a wonderful picture of Ronni in her lovely home! So cool!

Don't we all talk with our cats? Seriously, nice picture, not bad article, and nice new picture at the top here too. You smile good.

Great poem! In our old age, we can be as carefree in spirit as we were when very young.

It's all that in-between stuff that wears us down and steals time from us.

Now we get some of that time back. Time to just BE.

...'Standing alone staring at his image in the jardinière pool....'

Thank you, thank you!
You have me Whooping and
Laughing!

I just knew that Ollie was a good sounding board for you. So far, he has let you make very few,if any,mistakes.

Cats are the best "folks" to talk to. :) Nice pic, Ronni. Could you possibly share the poetry sources? Dee

wonderful to read of folks who live alone. so often the articles i have seen are about young people doing so. So being older myself i was glad to see you included. not counting childhood, i have spent around 17 of my 66 years living with someone, the rest alone. am fine with this except for these last 4 years when i have lived in the boonies with few people around, no movie theaters etc. I think the stark loneliness of the environment would be easier to contend with if someone resided with me, but maybe that is pure fantasy.

Wonderful photo of you. :)

I have a mug which says I'm eccentric not crazy which pretty much sums up the quirky habits we fall into when living alone. Eating habits are the worst. I've recently started drinking stuff right out of the container, but I
feel slightly unsanitary doing it.
Loved the poem.

Wonderful pic of you Ronni, you draw me in with that great big smile.
XO
WWW
PS and the hair looks awesome!

Came to visit you from the NYT article - I like what I see & read. Will be back!

That new photo of you is just wonderful. You look radiant, happy and glowing!!

What a great addition to that strip of photos. And that smile!!

I live alone and never close the bathroom door. I do or don't wash dishes, do or don't straighten the books all over all furniture surfaces. But I do close all closet doors so I'm not reminded of the piles of shoes and socks on the floor. My sleeping ensembles are haphazard.

In my early 40s, living alone, I took the door to my bathroom (attached to my bedroom) off of its hinges and stored it. The bedroom was too small for me to give up the space to swing the door!