SONG FOR ANDREE GEULEN
My neighbor Bill Pederson, who spends winters in Arizona, sends along this video made in celebration of a remarkable woman's 90th birthday.

During World War II, Andree Geulen joined an underground group in Belgium to rescue Jews from the Gestapo. For more than two years she took in Jewish children and hid them in Christian homes and monasteries under assumed identities.

Throughout the war, she kept track of the children, keeping a secret record of their original names and other details about them in a diary. At the end of the war, she returned as many as she could to their surviving relatives. Some say she saved 3,000 children. Here is the song and more of the story.

In 1989, Andrée Geulen was recognized at the Israeli Holocaust memorial, Yad Vashem, as a Righteous Among the Nations. There, at a special ceremony in 2007, she was awarded honorary citizenship of the State of Israel. You can read more about Ms. Geulen's work and life at the Yad Vashem website.

PLAY ROCK, PAPER, SCISSORS AGAINST A COMPUTER
It says at The New York Times, that “computers mimic human reasoning by building on simple rules and statistical averages.” So the paper created an interactive game of Rock, Paper, Scissors to play online.

It comes in two modes - novice, and veteran in which the computer uses its database of 200,000 previous games. I tried novice and still lost nine out of ten games. You can try it here.

SENSATIONAL PORTRAITS OF OUR PRIMATE COUSINS 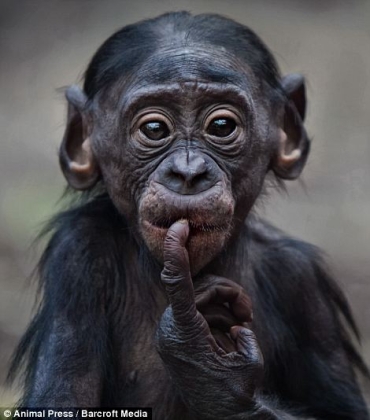 Can you stand it? So human and so not human all at once. A hat tip to Carol Wasteneys for sending the link to this page at the Daily Mail with a more gorgeous primate portraits from the Frankfurt Zoo by German photographer, Volker Gutgesell.

A DAY MADE OF GLASS - 2ND GENERATION
Most of the glass on smart phones and tablets is specialized to do amazing things. This video shows what this glass - or new generations of it - will do for us in the future. It is astronishing, but most of us reading this blog are unlikely to live long enough to see it in real life.

Not to mention that I question some of its usefulness. Nevertheless, it is a wonder to watch.

There is another version of this video, longer at 11:30 minutes, explaining it all.

REPUBLICANS STILL BELIEVE OBAMA IS NOT AMERICAN BORN
Now you would think that when President Barack Obama called Donald Trump's bluff and released his long-form birth certificate, that would be the end of the birther phenomenon. Not so.

Last year, a survey of Republicans asked if Obama was born in the United States. After the release of the birth certificate, the number of those agreeing jumped from 30 percent to 47 percent – still shameful but an increase.

In January this year, the question was asked again of Republicans. This time 27 percent agreed. Huh?

The chart is too small to reproduce for this post. You can see it and read more here.

MEET A BLACK PERSON
This is an old prank from 2006, but I had not seen it and it's pretty funny. The prank collective, ImprovEverywhere, put comedian Colton Dunn in an empty hot chocolate kiosk at the foot of a mountain in Aspen to greet people as they came down from the slopes. Take a look. (Hat tip to Nikki)

WAYS TO RE-USE OLD BOOKS
Carol from CO alerted me to these photos of ways people have found to use old books they aren't going to read anymore. I think the library counters are perfect (originally from here). 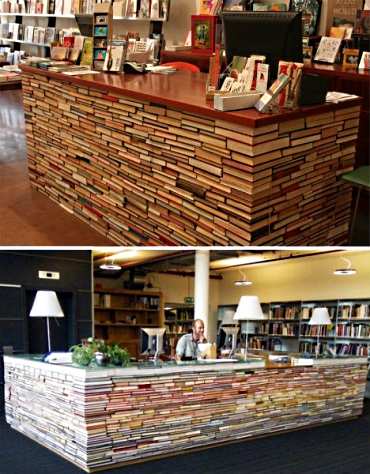 And this one (originally from here) sure does save on cleaning up pine or fir needles after the season. 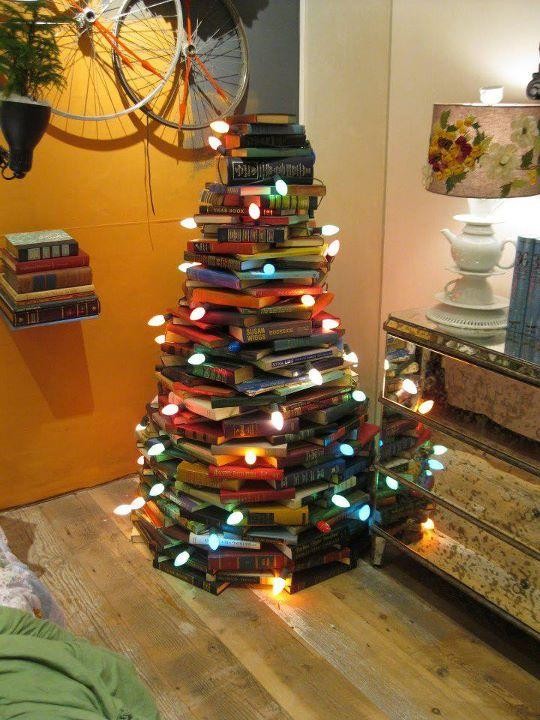 NIGEL FOTHERINGTON CYBORG
That's what a British company, CNFX Workshop, named this little bundle of electronic joy and it is so real - or will be when it gets its skin - that it creeps me out. See what you think:

The Gajitz website, where I found this video, says the animatronic baby

”...will allegedly be used for some sort of television show...

“...according to the creators of this terror, the clients it was built for were completely fooled once the creepy thing got its skin: they thought little Nigel was a real, human baby until they were told differently.”

KITTY/KID WRESTLING MATCH
After that animatronic baby, I think a real, live, human one is in order. According to the date on this video, it's 11 years old but age has not diminished the fun at all.

One study that addresses the difficulty of correcting incorrect information is found at Correcting the Incorrect – And Remembering it!

"Our study shows that high-confidence errors are more likely to be corrected at first, but over longer periods of time these same errors are likely to come back if the correct information is forgotten. As a result, the hypercorrection effect seems like an important opportunity to help people correct their misconceptions, but we will need to give them additional practice with remembering the correct information [emphasis added - CC] if we want to produce long-lasting error-correction."

This could explain why the outright, blantantly lying negative political ads are so effective: later correction doesn't always lead to permanent implantation in people's memories - even if the corrected information is quickly put before the public (which isn't always possible when the ad comes out just before polling).

Ms. Geulen is a heroine by any standard. Imagine the courage it must have taken to stand up to those terrifying bullies. She certainly deserves a medal for rescuing those children. In fact medals would not begin to reward her for her kindness and daring.

Seeing the primate reminded me of this rhyme:
"Man descended, the ugly cuss.
But brother, he sure didn't descend from us."

But in fact, we did and there are many similarities in our two species.

Couldn't resist the game. Came out pretty well. 9 for me and the computer, 6 ties. Quit while I was ahead. Spent 40 years of my working life writing code and doing more complicated things so may have had an advantage - or maybe not.
Anyhow, I quit while I was even.
Thanks for the fun time.

It was very interesting to read about Andree Geulen. I am always so impressed to read of the bravery and concern of these people who risked their own lives to help others.

My late Father in Law ,Ernst Leitz, had relatives in Germany who also did their very best to help their Jewish Friends and employees
escape from Hitler's tyranny.

If you will look up LEITZ FREEDOM TRAIN on Wikipedia you will see what the Leica (Leitz Camera) Company did to help thwart the efforts of Hitler to enslave their Jewish employees.

I'm very proud of them.

Loved the Christmas tree. How clever!!!!bkj

You can't do that with e-books!

Yes, that robotic baby IS creepy. I'd like to see it with its skin on though.

The primate portraits are stunning.

The rest look so interesting; will have to wait to look at or read them later though.

Thanks for a great collection!

I love the books but my favorite is the Meet A Black Person kiosk. So funny.

Of course, the Republicans know Obama was born in the United States. They just keep denying it because they WANT to believe it, and they ignorantly think they can make others believe it, too.