YAAKOV KIRSCHEN'S DRY BONES
There are days in my life when I find it so painful that friends live so far away I can hardly allow myself to think about it.

In the past, I have shown you some work of my artist friend, Sali Ariel. Today, it is her husband, Yaakov Kirschen, the creator of Israel's Dry Bones cartoon that he has been writing and drawing for nearly 40 years. He is terrific in this recent video:

You can follow Yak's work at his Dry Bones Blog.

THE PERILS OF COMPUTER TRANSLATION
From Guardian UK:

”According to Sahil Anand, who first posted the photo to Facebook: 'A contract company out here [in Egypt] was asked to stencil on the side of a fuel tanker: Diesel Fuel in Arabic and No Smoking in Arabic. This is what came back.' If only we knew the Arabic word for 'fail.'” 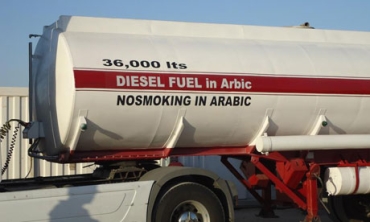 WHAT BREAST CANCER IS
Tarzana sent the link to this stunning video made, in the wake of the Komen/Planned Parenthood debacle a couple of weeks ago, by a breast cancer patient named Linda. She is to be congratulated for her openness and honesty along with every good wish for a speedy recovery.

PONY TAIL SCIENCE
“Rapunzel number helps scientists quantify ponytails” says the headline on a story that has received a lot of play on tech websites and solves a puzzle they say Leonardo da Vince pondered:

”The Rapunzel Number provides a key ratio needed to calculate the effects of gravity on hair relative to its length.

"'That determines whether the ponytail looks like a fan or whether it arcs over and becomes nearly vertical at the bottom,' Goldstein said in a telephone interview.”

And this is important because??? It will have, so sayeth scientists,

”...resonance with the computer graphics and animation industry, where the representation of hair has been a challenging problem.

TUSKEEGEE AIRMEN VISIT WHITE HOUSE
The Tuskegee Airmen were a segregated group of pilots who fought in World War II. Recently, they were honored by President Barack Obama and the first lady at the White House for a screening of a new film, Red Tails, about them.

You can find out some more about the Tuskeegee Airmen at this Wikipedia page that has a lot of external links with more information about them. Here is a trailer for Red Tails. The film was released in January.

TEEN ROMANCE RESUMES AFTER 70 YEARS
Betty Hove, 85, and John Grosch, 87, lost track of each other during World War II and more than half a century of living went by. Now they are reuniting. The video covers it pretty well but you can read a little more here.

TAKE YOUR CAT TO WORK DAY
Actually, The “first and last” take-your-cat-to- work day. I found this at Jan Adams blog and like she says, it “rings true.” (It may be originally from this Flickr site or just posted there.

WOMAN'S NEW JAW MADE WITH 3D PRINTER
Last July, I showed you what, to me, was an amazing, eye-popping video about 3D printers that make – well, 3D objects with about as much ease as a paper copier.

This is even more – um, jaw-dropping. It was announced earlier this month that a woman's jaw has been replaced with a new one made with a 3D printer. Here is a short, animated explanation of the technology:

The printed jaw is made from titanium powder. The patient is an 83-year-old woman whose own jaw had become infected. She is now able to speak, eat and function normally again. This holds amazing possibilities for the future. You can read more here and here.

AW – SWEET, TENDER AND WONDERFUL BABY LIONS
At least half a dozen readers sent this too-cute-for-words video. It was lion keeper Douglas Hamilton's last day with the cubs.

The baby lions are adorable!! But the sounds they make - lol

Love the video of the two oldsters getting ready to meet again - sure would like to see that!

Great videos from Linda and from the movie, "Red Tails".

The breast cancer survivor, Linda, is so courageous in showing us what breast cancer really is. I wish that every woman in the Koman foundation and every politician in Washington had to watch it.

I wonder if Linda's video will go "viral". If not, it should. And all done without a pink robe or pink bow in her hair. You go, Linda. Dee

And good morning to you too. Yes, I too miss my old friends, but I've made some magical new friends here online. Today's entry hilights three of them.

The artificial jawbone story is amazing.

I just love the video of the high school sweethearts about to meet again after 70 years apart.

The Tuskegee airmen story is wonderful, too.