ONE OF THE REASONS I MISS NEW YORK CITY
When I first moved to New York in 1967, a taxi driver told me that the best thing about the city is that if you're one in a million, there are seven more people in town just like you.

And so it is – a city with odd, wonderful, interesting people on every block. Below is one of them in a video titled, This is My Home. But before you watch, let the filmmaker explain:

”On an unseasonably warm November night in Manhattan on our way to get ice cream, we stumbled upon what appeared to be a vintage shop, brightly lit display window and all.

“As we began to walk in, a man sitting out front warned us that we were welcome to explore, but nothing inside was for sale. Our interests piqued, we began to browse through the collections the man out front had built throughout his life. This is a story of a man and his home.”

You can watch three bonus clips of the man and his home here.

FCC ENDS TELEMARKETING ROBOCALLS
I get twice as many as personal calls – those auto-dialed, recorded messages telling me my credit is in dire need of repair or some such that eat up mobile phone minutes. Now it ends. Last Wednesday, the Federal Communications Commission (FCC) banned them.

”Companies will no longer be able to point to an established business relationship with a consumer to justify the automated pitches.

"'Consumers have complained to us by the thousands about annoying robocalls,' said FCC Chairman Julius Genachowski during the agency's monthly open meeting.

"'The order we adopt today will require written opt-in, and it will make it easy for consumers to opt out. We're closing loopholes that have allowed robocallers to sneak through,' Genachowski said.”

Robocalls from charities, political campaigns and a few other types are still allowed. You can read more about the new rules here and find out all you need to know about unwanted telephone calls at this FCC webpage.

SENATE CANDY DISH
It has come to my attention that there is a candy dish – well, desk - in the U.S. Senate. It's been in existence since being started by California Senator (and former movie dancer) George Murphy in 1968, located in the back row of the Republican side of the room near the most high-traffic door. 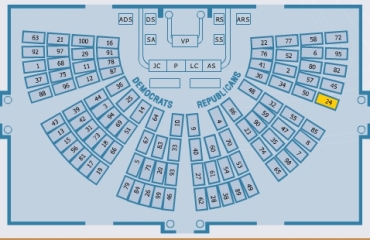 Since Murphy, other senators have kept the desk full of sugary treats including Rick Santorum from 1997 to 2007. 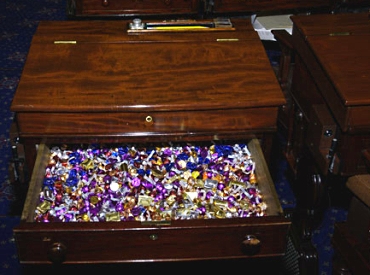 Democrats, who do have their own, less well-known candy desk, also use the Republican supply. You can read more here.

MORE PRESIDENTIAL SINGING
This clip from an In Performance at the White House: Red, White and Blues television show that will air next week on PBS has been shown everywhere and you've probably seen it.

Too bad. I love it too much. It's just great, so I'm posting it here – B.B. King, Buddy Guy, Mick Jagger and bunch of other blues legends who coaxed President Obama into joining them on Sweet Home Chicago.

Later, the president said this about life in the White House:

“Some nights when you want to go out and just take a walk, clear your head, or jump into a car just to take a drive, you can’t do it. Secret Service won't let you. And that’s frustrating. But then there are other nights where B.B. King and Mick Jagger come over to your house to play for a concert. So I guess things even out a little bit.”

ICE HOTEL
I don't have a bucket list. Aside from living in New York City again which I can't afford, the things I want to do before I die are smaller and more personal in nature than are convenient for a list.

Except this: it would be fun to spend a night or two in an ice hotel. There is one each winter in Quebec and a few other places. This one is in Sweden about 400 miles north of Stockholm. You can read about more about ice hotels here.

WHEN REPUBLICANS ARE AT THEIR WORST...
Jon Stewart is at his best. From early this week:

AMAZING COMPUTER FUN
From Nancy Leitz, who is a regular contributor to The Elder Storytelling Place, comes this computer, internet silliness. Yes, it's an advertisement and more, it's for a product we don't need anymore at our age, but still, it's still silly fun.

Go try it here. Just type in your first name and wait about ten seconds to see what results.

GERMANY'S BEST ENGLISH LOANWORD
A jury of linguists in Germany has selected the best English-language word import to their country and language. Are you ready for it? Shitstorm.

”Anatol Stefanowitsch, who headed the jury, said Monday that shitstorm 'fills a gap in the German vocabulary that has become apparent through changes in the culture of public debate.'”

Sounds like their politics are even more contentious than in the U.S. You can read more here.

TWIN BABY MOOSE PLAYING IN THE SPRINKLER
Did I ever tell you my personal moose story? Never mind – some other time. This video shows that even the most ungainly animals have cute babies.

And don't forget that George Murphy was best known for dancing with Shirley Temple! http://youtu.be/Q76D6FDNYcs

As to the robocalls, I've receive one daily every day at 2 pm and I've tried everything to get rid of them. They want to lower my rate on my credit cards. Guess what? I don't have any credit cards. I hope it goes away.

Unbelieving me - I received a robocall political poll a couple of nights ago - on my cell phone!

This blog is SO MUCH FUN! Just the perfect mix of serious and not so serious. You go Ronni!

I would love to hear Obama sing an entire song. That guy can belt it out. What a president!!!

Enjoyed all the posts, but especially loved the man living in his own museum in NYC. People like him are what makes me reconsider whether what some people would call angels,or perhaps people who, while I don't want to refer to them as aliens, but who are more than human live among us. I would love to meet him in person.
Thanks for another great Saturday morning of entertainment and edification.

Performance at the White House has me dancing in my chair!

I just received a robo-call to lower the points on my credit cards last night. And I got it on my home landline -- which had been registered on the "stop solicitation phone calls" service for quite some time.

When are these things supposed to be stopped? 2025?

By the way, you can now put a stop on calls to your cell phone just as you did your landline. Wonder if this will work any better than the previous STOP order on my land line ... sighhh

So Diane will stop offering to clean my rugs?

And no more hearing from companies who want to lower my credit card rates...and can't even identify what card I have?

Yeah, I love hearing the President sing. Like President Clinton playing the sax, it humanizes someone who can seem untouchable.

I do worry, though, about what will happen to all the neat stuff that the man living in the NY storefront has accumulated.

The ice hotel is great -- until you need to get dressed to go to the bathroom during the night. The ice rooms don't have their own bath ensuite!

Great day at Interesting Stuff. Thanks!

No ice hotel for me. I've had enough of winter. Brrrr!

I enjoyed the videos. Fun to watch the twin moose "younguns" playing in the sprinkler while patient Mama moose looks on. Jon Stewart is always on target. Fun to hear the President singing, too. He sure beats Mitt Romney's "singing."

And for some reason, I got a kick out of that candy drawer. Maybe it proves they're all kids at heart.

I wouldn't want to live like that man does with all of that stuff around him. Too much!

I haven't received a robocall in a couple of days, but didn't know about the ban...What bliss! Ever the pessimist, I'll enjoy the peace while I can. I have no doubt they'll find a way around the new ban just like they did the Do Not Call lists.

As for the man at home in his own museum - in keeping with my pessimistic mood - I couldn't help wondering if he ever dusts it.

Enjoyed it all today. Thanks.

i'm never putting my hand into any candy drawer that santorum has been in.

If you need a place to stay in the Stockholm area before you head up north, you're welcome!

I've just discovered your blog, courtesy of the New York Times link, and boy, oh boy, am I grateful. Now I'm off to explore and prowl around more. Thanks for having created this place!