ELDER POETRY INTERLUDE: In View of the Fact

The people of my time are passing away: my
wife is baking for a funeral, a 60-year-old who

died suddenly, when the phone rings, and it's
Ruth we care so much about in intensive care:

it was once weddings that came so thick and
fast, and then, first babies, such a hullabaloo:

now, it's this that and the other and somebody
else gone or on the brink: well, we never

thought we would live forever (although we did)
and now it looks like we won't: some of us

are losing a leg to diabetes, some don't know
what they went downstairs for, some know that

a hired watchful person is around, some like
to touch the cane tip into something steady,

so nice: we have already lost so many,
brushed the loss of ourselves ourselves: our

address books for so long a slow scramble now
are palimpsests, scribbles and scratches: our

at the same time we are getting used to so
many leaving, we are hanging on with a grip

to the ones left: we are not giving up on the
congestive heart failure or brain tumors, on

the nice old men left in empty houses or on
the widows who decide to travel a lot: we

be: until we die we will remember every
single thing, recall every word, love every

loss: then we will, as we must, leave it to
others to love, love that can grow brighter

and deeper till the very end, gaining strength
and getting more precious all the way... 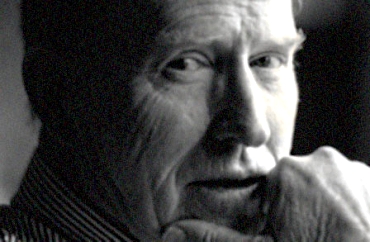 A.R. (Archie Randolph) Ammons was born in 1926, served in the U.S. Navy during World War II and after a decade as a sales executive for his father-in-law, joined the English faculty at Cornell University where he also served as poet in residence until retirement in 1998. He died in 2001.

Why in the world would the wife be baking a 60-year-old? Isn't that ageist?
(Sorry, Ronni...well...almost!)

Thanks for attempting to expose us to a little artistic expression of well thought out ideas!

Lovely!!! A beautiful commentary on how life progresses! This week I wonder if I'm next.

Another wonderful poem...I have read this one many times over the past few years.

"There is poetry as soon as we realize that we possess nothing." ~John Cage

Sometimes when I was little girl, I would see my grandmother standing at the kitchen sink, looking out the window. There would be tears in her eyes. But when she turned to me, she had a big smile.

Now I understand the tears.

It used to be that deaths of contemporaries were due to tragic accidents or inexplicable random diseases. Now it is mostly the inevitable.

A turning point comes when one begins to read the obituaries for news of contemporaries.

Inspiring . . Cheerful . . Reminds me of a cold, bleak, rainy morning as I lay there in my tent wrapped in a wet blanket.

Keep it up, and I'll move to warmer climate.

Beautiful and poignant. Yet, I prefer to dwell on the brighter side--seeing the sunshine days, the smiles of family and neighbors; the robin nesting in our crabapple tree, enjoying the scents of Spring. None of us was put here with a guarantee as to how long we might remain and losses are inevitable, but they need not overshadow everything else.

This is precisely why, as elders, our world view is so rich. We have many sorrows and many joys living inside us. So our view of beauty is painted with a palette of thousands of shades and colors.

We begin our lives with only red, blue and yellow.

The poem speaks of a reality that we all face. My address book needs to be replaced because there are so many crossed out entries. It's depressing to open it and see how many former friends have died.

"Where you stand, once stood I.
Where I am so shall you be."

This reminds me of my aging mother's observation, "All we do anymore is go to funerals." And it is likely why I don't read the high school alumni magazine that a relative keeps sending me. I don't need to see familiar names and dates in the obituaries. I'm probably in denial, perhaps unhealthy, but so be it.

I like the abstractness of this, the floating motes that are so firmly tied to reality.

Most of my first cousins are dead now, but all five of my siblings are still living. It is a toss-up which of us will be the first to go.

Despite this awareness, we live interesting, joyful lives. The knowledge simply makes it all more precious.

I have lost so many very dear ones in the last few years--
still think of them and miss them. Still send them love and special thoughts.
Funerals are important so that we remember we are not here forever and to make the most of each day so that we will be missed too.

p.s. Lovely, moving and apt poem. Thank you Ronni for posing it.

This is a great post. It really makes you think about life and not taking it for granted.

This poem reminded me of a collection of poems by Edgar Lee Masters called "The Spoon River Anthology".

My Dad gave me a copy of this book as a teen ager and I still have that little book and often read it.

Below is just a sample. If you read just this first part I think you will be tempted to read the rest.

Where are Elmer, Herman, Bert, Tom and Charley,
The weak of will, the strong of arm, the clown, the boozer, the fighter?
All, all are sleeping on the hill.
One passed in a fever,
One was burned in a mine,
One was killed in a brawl,
One died in a jail,
One fell from a bridge toiling for children and wife—
All, all are sleeping, sleeping, sleeping on the hill.

I'd guess that Spoon River's "The Hill" gang all died before they reached old age, as most people did until a couple of generations ago. One doesn't associate death in a brawl or in jail as being an elder's usual exit strategy.

I don't spend a lot of time contemplating death, and being an elder I'm obviously no advocate of early demise. We humans think we've outsmarted Mother Nature when medical science "saves" a premature infant no bigger than my hand. And at the other end of life's spectrum when that same heroic medical technology repeatedly "saves" a bedridden 93 year old who has long since outlived everyone and everything she loved (and all her savings!). I wonder.. . are we so smart? Really?

Just stumbled on this. It's great. Thank you.