Elders, the Supreme Court and the Republican Budget

Beginning today through Wednesday, the U.S. Supreme Court is hearing six hours of oral arguments in regard to several aspects of the Affordable Care Act. (That's “Obamacare,” the once derisive name Republicans gave the Act which the Obama administration is now pro-actively claiming for itself.)

The politics of this Supreme Court case (officially titled U.S. Department of Health and Human Services v. Florida) are huge and, depending on the decision, will have far-reaching consequences for the future of health care in the United States. The major issue is whether the individual mandate that, beginning in 2014, requires most adults to purchase health coverage is constitutional.

On the final day, the Court will address “severability.” the question of whether the rest of the law can remain in effect if the mandate is struck down. Lincoln Caplan and Philip M. Boffey at The New York Times have written an understandable and mercifully short explanation of all the legal issues at stake.

Many experts expect the Court to uphold Obamacare by a narrow margin, but you never know and if they do not, there are negative consequences for elders you should know about. One is the provision for states to expand Medicaid, which many elders use and need.

If the worst should happen – if the Court strikes down the individual mandate AND decides then that the entire law must fall – so would such benefits to elders as, among others, the gradual closing of the prescription drug doughnut hole, annual wellness screenings and other preventive tests, along with improved quality and safety at nursing homes.

That the Obamacare legislation is before the Supreme Court at all is a result of several lower court cases brought by right wing, Republican, conservative opponents of the law who from the moment it was enacted two years ago, determined to kill it any way possible.

The plan is so extreme that it is hard to consider it as anything more than a move farther to the right so that, for example, the Simpson-Bowles proposal will seem moderate by comparison. As the National Committee to Preserve Social Security and Medicare (NCPSSM) succinctly explains, the plan builds on last year's Ryan/Wyden idea to:

”...[balance] the budget by turning Medicare into a privatized program giving seniors a voucher (designed not to keep pace with their health costs over time) to buy private insurance.

“The new twist offered this year is a promise to also keep traditional Medicare as an option. Unfortunately, what that really means is private insurers will siphon off younger, healthier seniors while older and sicker patients remain in traditional Medicare which will increase the program's costs, potentially limit doctor participation, and create a death spiral to Medicare’s demise.”

Richard Eskow at Campaign for America's Future reports that although it is not in the text of the proposed budget, Republicans want to raise the age for Medicare eligibility:

”So how do we know that the GOP wants to raise the Medicare eligibility age from 65 to 67? Because that's what Ryan and his staff told the Congressional Budget Office when they asked the CBO to calculate the impact of their plan. It's right there in the CBO report on the budget.

“Here's the key sentence: 'In addition, the eligibility age for Medicare would increase by two months per year beginning in 2023 until reaching age 67 in 2034.'"

Eskow also explains two other Republican secrets not readily knowable from the text of the budget: that private insurers would get to set their own rates and per-person spending for Medicare would be radically cut. Go read his whole story here.

Candidate for the Republican nomination for president, Mitt Romney, has endorsed the Ryan budget plan. On the day Ryan released the Republican budget, one of Romney's top economic advisers and Harvard economics professor, Greg Mankiw, published this on his blog titling it, “Fiscal Solution.” 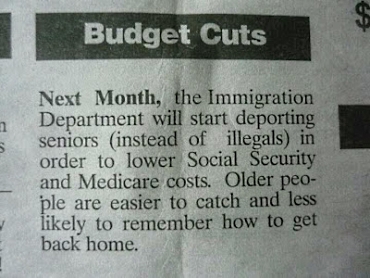 Uh-huh. Apparently he does not allow comments on his blog but felt enough pressure from somewhere that he posted an update: “Obviously, this is a joke...”

Elsewhere in the political universe, the Ryan budget proposal is seen as so extreme that even some Republicans reject it and Democrats are all but gleeful to be running for election against the Ryan plan in November.

That might be because in addition to slashing programs that benefit the poor and middle class, the budget cuts taxes for the wealthy individuals by an average of $187,000/year for millionaires; cuts the corporate income tax rate to 25 percent from 35 percent; and creates system to exempt offshore profits of U.S. corporations from corporate income tax.

Further, the Ryan budget would shrink spending so much that within 30 years or so, there would be no money left for many federal agencies. From the Center for Economic and Policy Research:

”Since Representative Ryan has said that he wants to keep military spending near its current level of 4.0 percent of GDP, this would leave no money to pay for the Justice Department, the Food and Drug Administration, Education, the National Institutes of Health or anything else that the government does.”

Well, as you can see, I got way too far into the weeds of budgets and health care this weekend. You have no idea the number of details I'm sparing you.

Smarter people than I believe this budget, like last year's Ryan plan, is already dead in the water and I agree. But what is important is for us to keep our eyes on this stuff and understand stand it enough to know when it's time to speak up and make some noise. (Not yet.)

Here's a little item that has nothing – or, possibly everything – to with today's post. Call it the insanity of the one percent:

Honest. Unbelievable as it sounds, that has really happened. You can read more here.

This comment is for readers here in Oregon: as far as I know, Senator Ron Wyden has had a reputation as a reasonably progressive, intelligent and caring man, so WHAT CAN HE BE THINKING?!!

I certainly would like to read any edifying comments from someone better versed on Wyden than I am.

All of this just shows how important it is to vote for the Democrats this year. One more right-wing Justice placed on the Supreme Court will complete the destruction of democracy.

The Citizens United irrational decision and the fact that the Supremes are taking up this legislation at all is terrifying.

I am very worried, too.

ACA -- I was for it before I was against it.

It's a complex issue that started as a good idea, then got sliced, diced, and chopped into a patchwork piece of legislation that was rammed through at the eleventh hour. No one had time to read all of the final 2,000+ pages before they voted on them.

To me the fatal flaw was eliminating the public option while still requiring everyone to buy insurance. The idea originally was to provide a low-cost public option that the currently uninsured could afford. It made no sense to require the purchase after the affordable public option was dropped.

Personally I think it's unconstitutional for the federal government to require the purchase of any commercial product (which insurance is). And it's the Supreme Court's job to decide issues of constitutionality. However, the legislation contains a lot of good things that everyone agrees on and they should either be retained or implemented in separate, new legislation.

I don't think the legal issues will have much impact on the decisions of the supreme 4 - as for Kennedy? Who knows. The 4 cons will interpret the constitution to conform to their own conservative ideology and they have demonstrated already that precedent doesn't matter to them so I don't hold out much hope for Obamacare's survival in any usable form.

P.S. As for throwing us seniors out - Dibs on the west coast of Canada around Vancouver/Victoria.

I have no idea what the Supreme Court will decide, but I'm hoping for the best. With all due respect to those who object to requiring Americans to purchase a "commercial product", let's look at the individual mandate logically. How can near-universal coverage be provided without spreading the risk? The "risk pool" must include younger, healthier people as well as older, less healthy ones.

Paying for health care is not like purchasing a car or a refrigerator. The fact is that any one of us may need health care at any time. Older people as a group may need more care; however, younger people aren't immune. They have auto accidents. Many of them engage in risky sports or other activities. Certain cancers target younger people. Younger women get pregnant, which carries health risks.

Almost everyone will need medical care at some time in their lives before they are eligible for Medicare (if it survives). So, how does it make sense to allow them to "go bare" (choose not to purchase insurance) until they get sick or are injured and need care? Our society has determined that care must be provided. Striking down Obamacare doesn't solve the basic problem: who pays when those who have no insurance and no resources need medical care?