Home About Archive Contact
Young at Heart? Not Me
ELDER MUSIC: Big

REMINDER: CHANGE YOUR CLOCKS TONIGHT
Don't forget to move your clocks forward tonight one hour. Well, everyone except for Hawaii and most of Arizona. 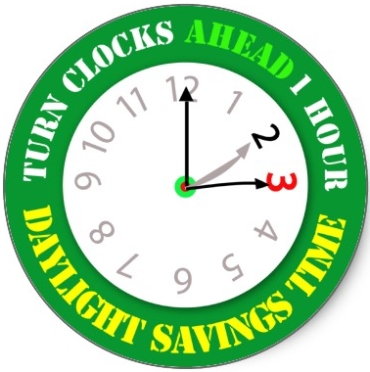 Just before you go to bed Saturday night is a good time to do it.

JUDI DENCH PLANTS A TREE
2012 is the Diamond Jubilee of Britain's Queen Elizabeth and there is a national project to celebrate by planting six million trees before the end of the year. Here is a favorite actor, Dame Judi Dench, doing her part for the cause. (Hat tip to Nikki of From Where I Sit)

BOOK SUICIDE
I just hate that I am terrible at writing headlines and captions. Good ones make an ordinary image compelling and, often, funny - like this one. (Stolen from Judy Carrino's Facebook page) 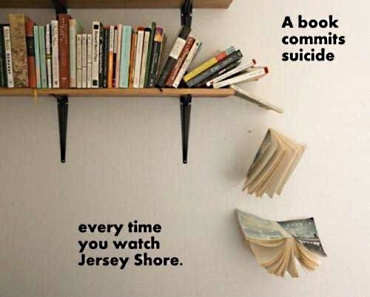 OBAMA 1990 – “THE BREITBART VIDEO”
Before his recent demise, right-wing provocateur, Andrew Breitbart, promised he had a video that would bring down President Barack Obama.

When the footage was broadcast on Fox this week by a credulous Sean Hannity, it became an instant Twitter joke. There is nothing the least controversial about Obama's introduction of Professor Derrick Bell.

And, the video is not the exclusive Hannity claimed. A longer version aired on Frontline on PBS in 2008.

All this much ado about nothing aside, it is interesting to see the young Obama 22 years ago. See what you think.

MORE THAN 20% OF ADULT AMERICANS ARE TATTOOED
Some of them have more than one, says a new Harris Interactive poll and here's a surprise (to me, anyway): women are more likely than men to have a tattoo by 23% over 19%.

Old folks are fairly well represented with 11% of those 50-64 having tattoos and 5% of people 65 and older. I think Maxine has a good point about tattoos: 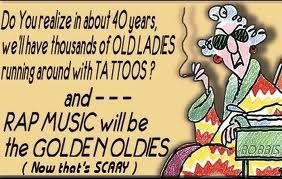 BIG KITTIES PLAYING WITH MIRRORS
From intense interest to boredom. Either way, it's fun to watch.

HAPPY BIRTHDAY OREO
I haven't bought Oreo cookies in years. They are way too fattening and one or two are never enough for me – especially after the Double-Stuf variety was introduced. But even though I don't eat them anymore, let's mark Oreo's 100th birthday this year as an iconic American snack. 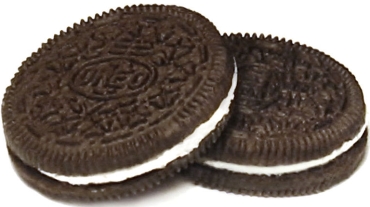 There are some fun facts here and although I do not recall ever seeing an Oreo TV commercial, you'll find more than 60 of them here where they have their own channel in YouTube.

GUARDIAN'S THREE LITTLE PIGS COMMERCIAL
You know the story: three pigs, three houses, a wolf, huffing and puffing and in the end, boiled wolf. Last week the Guardian UK released a video commercial for the newspaper showing how they would cover the story from first headline to social media conclusion.

The video went viral prompting a whirlwind of critiques – good and bad. See what you think. 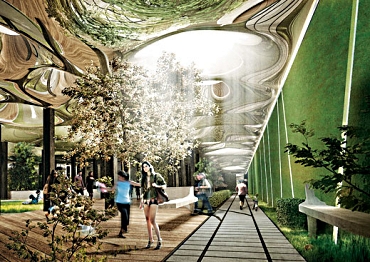 The creators have been seeking funding through Kickstarter and it was announced this week that they surpassed their goal of $100,000 – by a third so far – and will be funded by the deadline on April 2. I am so eager to see how this develops.

BOOMER BABES SING THE BEATLES REWRITTEN FOR ELDERS
About a year ago in this column, I featured Pam Peterson singing Memories rewritten with some funny elder lyrics. Now, reader Cathy Johnson sends along the information that Pam is one half of a singing group, the Boomer Babes.

So here she is with her partner, Jan Slavin, singing another elder spoof, this one set to a medley of Beatles songs.

Thanks for the mention; I'm glad you liked the photo (I stole it.)

Loved seeing the cats reaction to their images and the singing video is great.

Thanks Ronni for a good beginning to my w/end. Stories like the tatoos among elders just further shows how mad the world is becoming. :)One the other hand, I love the video of young Mr. Obama revealing his future. Have a great w/end. Dee

All good stuff today, especially the Guardian spoof of the Three Little Pigs.

Good laugh to start off the day.

Obama already had honed his speaking style back then, hadn't he?

This fuss annoys me because it has all the usual detractors trashing Derrick Bell. Bell was a fascinating, thoughtful guy whose writing was very accessible to those of us who are NOT lawyers but care about the varieties of justice. I'm linking here to an appreciation I wrote of this last book, Ethical Ambition, a look back over his life that I think many other elders might appreciate.

No cats here. Maybe my computer rejects play. It liked everything else tho including the Guardian ad. :)

Just go on You-Tube and search for Big Cats and Mirrors and you can get it.

Love the big kitties. If I were rich, I'd give oodles of bucks to big cat rescue and preservation groups around the world.

The Obama video I saw on TV this week, and not on Fox. It was probably CNN making fun of Fox.

Good grief, if I'd gotten a tat back in the day, it would be at least a foot lower now, and lord knows where that would put it. I doubt tats on 80-year-olds are going to be very attractive.

I can just imagine a tattoo with wrinkles and age spots. Not a pretty sight.

The captioning on the song lyrics were so garbled that I couldn't make sense of them (You always have to use your imagination when reading them, anyhow) so I missed what must have been a hilarious song.

Judy Dench is one of favorite actresses and planting trees is a wonderful thing to do. Go Judy.

I'm a 71-year old female with tattooed behind where only one person has ever seen it. He paid for it 20 years ago. She herself has to hold a mirror, twisting around and closing one eye to focus! Nice shot.
The Lowline has reached its goal!! Now I get a shirt! Thanks for the link; I will go see the site in June and report back.

If only more commercials were as creative and well-done as this Three Little Pigs one, we might watch television just for them. Thanks for another energizing and entertaining start to the weekend, Ronni.

I've thought that very many body tattoos could well complicate medical care in some circumstances based on various tattooed patients I've seen.

To each his own. Eyebrow tattoos make more sense as one person I know gets periodically since she lost that hair due to medical issues.

Funny cat reactions. Don't think many animals recognize the mirror reflection as being themselves. Some mirrors actually inside a cage have shown the animal looking behind the mirror for the "other" animal -- just as in a developmental stage young children go through.

I've never particularly cared for Oreos, but wish them well for those who do.