Happy weekend, everyone. Ronni here. Today's Interesting Stuff is almost entirely about animals. It was turning out that way so I just went with the flow. There are several birds, a cat, a whole lot of fish – beautiful fish and one tragic fish. But such is non-Disney nature is life.

There are also a couple of other items so that this doesn't begin to look like an Animal Planet blog.

Also FYI, there has been a recent uptick in suggestions for this weekly series (this is good, keep them coming) and I want you to know that although I don't acknowledge receipt, I do get around to using most of them eventually. When I do that depends on the mix I want for any given Saturday.

KLEPTO THE CAT
I mean it - a thieving housecat who steals on a such a magnificently mega scale that you have to admire him. (Hat tip to Larry Beck)

ELDERS DYING OF GASTROINTESTINAL DISEASE
Deaths from gut infections caused by Clostridium difficile and novovirus more than doubled between 1999 and 2007 and of those who died, 83 percent were older than 65, reports the Centers for Disease Control.

”Both diseases are spread by the fecal-oral route, meaning that people swallow germs found in feces, often spread by people who did not wash their hands after using the toilet.”

Not long ago, I published a story about how to survive a hospital stay; a big part is being sure everyone who touches the patient has just washed their hands.

You can read more about the Centers for Disease Control finding here.

RETURN OF THE BALD EAGLE
By 1967 America's symbol, the bald eagle, was nearly extinct due to widespread shooting, destruction of habitat and DDT and that year, the federal government listed the regal bird as endangered, banning the pesticide.

That worked so well that in 2007, the bald eagle was removed from the federal endangered list. Now, the number of breeding pairs in Oregon has grown so high, the state removed the bird from its list this month.

Bald eagles are huge, magnificent birds. They are thrilling to watch in the air and I'm pretty sure they have no peers at fishing. Look at this short clip and be sure your audio is turned up:

BALD EAGLE CAM Spring is here and there are baby birds or about-to-be baby birds all over the land.

Last year I told you about the Decorah bald eagle cam where three eaglets had hatched. This year, there are again three eggs which, the Raptor Research Project tells us, are due to hatch sometime between yesterday (as I write this) and tomorrow, Sunday. Here's the live cam:

You can see a larger size of the live eagle cam at the Ustream website and find out a lot more at the Raptor Research Project website where there are links to other raptor cams.

THE NEW YORK CITY HAWK CAM
This raptor cam is also back for another season online. Last year, a pair of hawks nested on the Bobst Library building of New York University above Washington Square Park which you can see in the background. I love having a live glimpse of my old stomping ground in Greenwich Village.

Unfortunately, at the end of last year, the female hawk, Violet, died. This year, Bobby has bonded with Rosie and baby hawk birth is now immanent. You can read more here and also view a larger image.

ANOTHER MONKEY TRIAL IN THE MAKING?
Do they still teach the Scopes Monkey Trial in school, do you think? You remember the famous 1925 confrontation in a Dayton, Tennessee courtroom between Clarence Darrow and William Jennings Bryan on the teaching of evolution, don't you?

Or maybe I do because in about 1960 or so, I played Rachel Brown, the daughter of the fundamentalist preacher in the play, Inherit the Wind about the trial in a little theater production in Marin County.

Now, 87 years after the famous trial, Tennessee is at it again, the state Senate having approved legislation, 24-8, requiring the teaching of evolution, global warming and human cloning as “scientific controversies” rather than as science.

The bill now goes to the governor for signature. In the same story, Alternet reports,

”Also on Monday, a bill to permit the display of the Ten Commandments in public buildings (HB2658) passed the Tennessee House by a vote of 93-9.”

I become more convinced every day that we are living through the beginning of a new Dark Age. You can read more here.

WOMEN “DEFACING” RICK PERRY'S FACEBOOK PAGE
In this case, I make an exception to my diatribe here yesterday against Facebook; this seems an excellent use of it.

In response, the federal Department of Health and Human Services cut off their funding to Texas.

And then, women went nuts – wonderfully, fabulously nuts – mocking Perry on his Facebook page with hundreds of requests for information on women's health. To wit:

“I would like your opinion since I can’t make medical decisions myself being a woman and all, about what brand of tampon to use."

"Governor Perry, I am experiencing mid-cycle cramping. Is this a punishment from god for not getting pregnant this month?"

“I know you want to be involved in my reproductive health, so I thought I’d let you know my period started a little early this month. Do you think that’s okay?”

"Governor, I have this unusual discharge, but I don't have any health insurance right now. You're an expert on women's health though - could you take a look?"

Commenting on Perry's Facebook page was closed and the “offending” remarks removed but not before some people grabbed screenshots and you can read more about the incident here and all over the web.

JUST IN TIME FOR THE RICK PERRY INCIDENT
Sent in by Carol from CO at just the right moment. No explanation necessary. 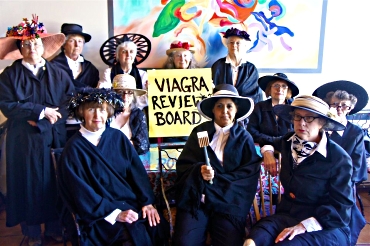 GOVERNMENT FREE VJJ
Even more wonderful women mocking guys who think they have a right to control us. At the new Government Free VJJ website, the subtitle is, “Dear Men in Congress: If we knit you a uterus, will you stay out of ours?”

At the website, you will find patterns for knitting and crocheting uteruses (uteri?) and instructions on how to have it delivered to your – ahem, member of Congress with a note such as, “Hands off my uterus! Here's one of your own!” Do go take a look; it's just great.

UNDERWATER DAKUWAGA'S GARDEN
If Republican politicians' unspeakable intention to take control of women's health have you riled up, this is the perfect antidote – gorgeous, soothing, underwater video from Dakuwaga's Garden near Fiji and Tonga, sent in by TGB reader Elizabeth.

I checked around a little and “Dakuwaga” is a shark-god from Fijian mythology. I like this best without the music which seems not quite appropriate to me, but that's an individual decision. Enjoy.

Ronni:
Several years ago I spent half a year in hospital for three serious operations. While there, the hospital kindly gave me an on-the-job chance to experience the wonders of "C-Diff" (As they affectionately refer to it),and after massive doses of potassium, two units of hemoglobin, and treatment with the latest "Super-bug" anti-biotic, my immune system kicked in and I'm still here. As they say, keep out of hospitals. That's where all the sick people are.

Am I the first one up this morning? Great mix of beauty, humor and outrage. Re: return of the Dark Ages... here is the principal group who is defending reason in science education. ncse.com The National Center for Science Education. I take every chance I get to plug them and their excellent work to keep the forces of Darkness at bay. They are David challenging Goliath and have chalked up some pretty impressive wins.

Loved the comments on Perry's Facebook page from women in Texas

I didn't knit a uterus. I knitted a "snatchel" to send into the cause. http://tiny.cc/uvjobw

Re: "C-diff" etc.: as my husband and I can definitely attest, ANY kind of gastrointestinal ailment (viral or bacterial) that causes an electrolyte imbalance is NOT good for us older folks. My husband had a recent bout with an opportunistic bug after finishing a round of antibiotics for acute bronchitis that developed after a bout with the "creeping crud" that's been going around.

The doc confirmed what we already suspected--that the antibiotic had destroyed not only the bronchitis but also all the good flora in his system. He was one sick puppy, and I can well imagine that hospitalized patients--who are already very ill--have a much harder time overcoming such bugs, including the infamous "C- diff".!

I also important that anyone who prepares food and serves it, including those who set the table wash their hands. bkj

I love the Cat Burglar and the comments on Rick Perry's page!