WOMEN'S HEALTH EXPERTS SPEAK OUT
After the squeaker of a vote in the Senate this week that did manage to defeat the horrific Blunt Amendment, we definitely need to blow off some steam and this video should do it for you. Send your thanks for the tip to Kavan Peterson, co-founder and editor of ChangingAging. Enjoy.

GLOW IN THE DARK SNOW BOARDER
According to YouTube, filmmaker Jacob Sutton presents this electrifying dash across the French Alps using only a trusty Red Epic camera (whatever that is). You can find out more about how it was done here or, like me, just enjoy the amazing beauty.

REQUIRING REAR VIEW CAMERAS IN ALL CARS
Having vowed that I will drive my little, red, 2004 PT Cruiser until until it or I die, whichever comes first (preferably the latter), this doesn't affect me. But it's a really good idea:

"Federal regulators plan to announce this week that automakers will be required to put rearview cameras in all passenger vehicles by 2014 to help drivers see what is behind them. The National Highway Traffic Safety Administration, which proposed the mandate in late 2010, is expected to send a final version of the rule to Congress on Wednesday."

The more I think about it, this is an excellent move to help keep elders driving safely longer and it the sort of improvement - with others that are gradually be added to cars - that could get me interested in buying a new one. You can read more here.

STOP MOTION PENCIL DANCE
This video was created by documentary filmmaker Jonathan Chong (also known as dropbear) as the official video for the song, Against the Grain by Melbourne indie-folk band, Hudson. It's amazing, colorful and fun – take a look.

These days, computers can do a lot of animation but there are still artists who, like Chong, do it by hand and I cannot imagine how they have the patience to shoot frame-by-frame such small increments of movement.

It doesn't explain that patience, but here's a short, behind-the-scenes look at the making of the Against the Grain video.

25 FASCINATING BRAIN FACTS
Did you know?

• On average, a single brain cell is connected with about 25,000 others

Staff writers at onlineuniversities.com have pulled together 25 fabulous facts about the brain. Go read them all here. It will give you renewed respect for taking good care of it.

OKAY – NOW I AM OFFICIALLY UNCOMFORTABLE
Am I the last person in America who remembers that is wasn't all that long ago we did not use the word, "condom," in polite company? Laughable in 2012, huh? Nowadays, various phrases explicitly referring to government-required vaginal penetration are tossed around in the media like cotton candy and we've all become accustomed to it.

Me too, I suppose, until I bumped into this clip online of Joan Rivers and Barbara Walters who started out talking about conventional cosmetic surgery and somehow wandered into vaginal tightening territory. Oy.

88TH BIRTHDAY PARTY
Jan Adams of Happening Here, who is on hiatus from her Gay and Gray column here while working on an important political campaign in California sent along this link to the 88th birthday party celebration of pioneering gay playright, George Birimisa.

"I’m still emotionally digesting my 88th birthday party. It used to be 99% queer but now I have 9 heterosexual friends...at the party of about 25.

"It was a humdinger. Such a change from the old-old days where everyone was getting drunk and dishing everyone else. And my 80-year-old sister was lovy-dovy with her 89-year-old boyfriend."

UNDERGROUND PARK FOR NEW YORK CITY?
I'm pretty sure most of you don't track what goes on in New York City with the devotion I do but perhaps you have heard of the High Line, the amazing park built on a long-abandoned railway tressle on the west side of town. It even has its own website.

Nikki of Nikki's Place alerted me to a proposed new park for Manhattan, an opposite number to the High Line called the Low Line. And here's a video about what it might be like:

The designers are trying to raise money for the project from potential backers via Kickstarter. You can read about it here and, if you think it is a worthy idea, you can invest by pledging as little as $5. The deadline to reach the $100,000 goal is 6 April.

SMALLEST LEGAL LIVING SPACE IN CALIFORNIA
After 40 years of living in 800 square feet in New York City, I relish now having nearly twice as much space to spread out in. Nevertheless, I've always been interested in how well designed tiny living spaces can sometimes be on boats and small dwellings.

This is a video tour of the smallest legal living space in California – 160 square feet – a marvel of space-saving ideas. You can read a bit more information here.

GETTING OLD IN COLD PARIS
Europe has suffered through an unusually cold winter this year and such weather is always particularly hard on old people. Claude Covo-Farchi has written a lovely essay titled, Getting Old in Cold Paris at her blog, Photoblogging in Paris. This is one of several accompanying photos. 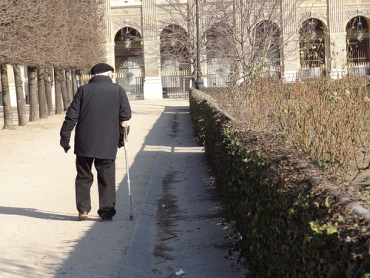 CONTINUING OUR OCCASIONAL SERIES IN INTERSPECIES COMMUNICATION
A mother cat and her orphaned baby squirrels. Too cute.

I saw some of the Rivers/Walters discussion & I was saddened by it because it is so obvious that generally women have paved the way for this type of "humor?" When will they get the message that being like men is not the same as being equal to men? Sad.

The video on women's reproduction is funny, but it too leaves me shaking my head. With that said, I've decided that even if I can't beat 'em, I'll definately not join them. :)Dee

Was so hoping for comments from you this morning regarding Rush Limbaugh's horrific verbal attack on Georgetown student, Sandra Fluke. Let's get her a talk show and remove this vile man from the airwaves!

The small space apartment would give me a major case of claustrophobia. Where would you put your stuff? I see where a few dishes could be stored, but what about food supplies? It's okay for a weekend, but after you stored your clothes and basic supplies it would be crowded and cluttered. Definitely an apartment for a Monk or a Nun.

Ronni, thanks once more for mentioning my Photoblogging in Paris piece.

The tiny house movement is fascinating. Makes having your own home more possible in this tight economy. Hopefully the time of the McMansions is past.

This reminded me how funny Joan Rivers is. When she started out there were practically no women comics. She paved the way for other funny women to follow. I'm sure she had a hard row to hoe in this regard, so she was a trailblazer.

Yes, she can be a bit coarse, but watch the Comedy Central channel for a while and you will see that most comedians nowadays turn the air blue.

I like that architecture. I could live there only if I put my life in storage. But I'd love it. :)

As usual, I look forward to your Saturday Snippets and always am rewarded.

I enjoyed the Against the Grain video and its music.

Not so much the Joan Rivers interview though.

The snowboard video was fascinating. I went to the camera manufacturer's website and discovered that they sell a package with camera and accessories for only ... $58,000.00! Probably why most of us haven't heard of that camera brand.

I love the micro-architecture, or whatever they call it. I attended a conference at a conference center where the participants stayed in rooms very much like the one in the video above. I loved it, and I think they would make great hotel rooms, dorm rooms, or studio apartments.

I loved this blog. My favorite is LowLine: having been a past native of NYC. Wouldn't it be wonderful if it can really happen.

I enjoyed all the blogs today, even the Joan Rivers/ Barbara Walters clip. I think the best part of it was when Joan answered Barbara's question with the vagina-tightening response, and Barbara said "what?" She's rarely at a loss for words, but the look on her face was priceless.
I've also been interested in this tiny living space movement for a while now. I'm wondering whether the knowledge and technology of it is being used, or will be, to address homelessness and great need for affordable housing. Very surprised to hear that 42% of people in San Francisco live alone. Thanks for the information and entertainment.

As always, I enjoyed everything in your post. The bit about small living spaces was very close to home. Many, many elders live in similar small spaces. They're called RV's or Motorhomes. Right now I'm in a community of them in So. Texas. I've become accustomed to living in small spaces since retiring to a cruising sailboat, afloat on the deep blue sea for 9 yrs sharing the very small space 24/7 with my hubby. (We say our time together counts double for years married.) A small space, whether boat or RV, means very little stuff. One must decide what's really important and what's not. The home we live in in Iowa is too big for us so we're going to put it up for sale in Spring. Can you imagine actually feeling strange in too much space? Also, I've found that the saying, "stuff expands to fit the space available" is so true! Time to shed stuff and get back to basics for me.

What keeps those glow-in-the-dark snowboarders from smacking into a tree? Snowboarding in the dark seems like a very dangerous thing to do.

I love small spaces too but this one felt too much like a filing cabinet. And if he's building them in SoMa they definitely won't have that view of the Bay. I would much rather have one of the gorgeous little Tumbleweed houses - see http://www.tumbleweedhouses.com/