Before I get to today's poem, there are two items you should know about.

Do you remember a month ago when I told you about the dozen or so elders – all retirees older than 60 - who were occupying a median strip in Ravenswood, West Virginia?

They were protesting against their former employer, Century Aluminum, which had reneged on its promise to provide lifelong health coverage. Here is a photo of them from their Facebook page. 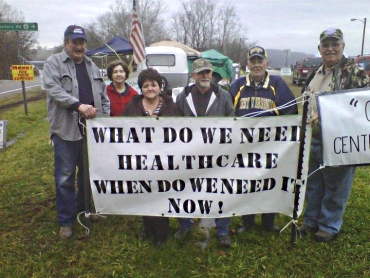 Yesterday, TGB reader James Files left a comment to let us know that Occupy Century Aluminum has finally prevailed. This is the initial announcement on their Facebook page Wednesday:

Occupy Century Aluminum FacebookThanks sooooooo much for your help!!!!!! We just won our battle and we are getting our health care back!!!!!!!!!!!!!!!!!!!! I am so happy! Will let you know more later. Thanks.

And here are the follow-up Facebook posts with some of the details of the occupiers' success. Their pride and joy justifiably overfloweth:

”Late this afternoon, with the help of the USWA's Tom Conway, the unending support of Governor Earl Ray Tomblin and Senator Jay Rockefeller and many, many members of the West Virginia Legislature, the retirees were able to come to an agreement with Century Aluminum for restoration of benefits for the retirees.

“There are several other pieces of the puzzle that must come together before they will be effective, but we are confident that they will happen. The retirees are overwhelmed that the 'little people' could dance with the big boys and win the justice we were seeking.

“It is an amazing story of how all can unite behind a common cause and if you TRULY believe, you really can make a difference. The good Lord was our leader and he showed us the way because we were on the right side of this fight. The lesson to be learned is this, All things are possible if you only believe.' Never, ever give up, no matter how long the journey.”

“...Soon, our occupy site will disappear, but our spirit will dwell here forever. God bless the greatest group of retirees I could ever have been blessed to meet and soon, maybe they can now be retired with the dignity they so deserve!”

They camped in tents on that median strip for three months during the depths of winter cold, ice and snow. Let us all keep that and the retirees of Occupy Century Aluminum in mind when we think it's too hard to write another letter to Congress, pick up the phone or do whatever else is necessary to make our voices heard.

You might want to stop by Occupy Century Aluminum's Facebook page to leave a note of congratulations.

We can also celebrate today the defeat in the Senate of the Blunt Amendment I told you about yesterday by an embarrassingly close margin of 51-48.

Undoubtedly, both Senate and House Republicans will have another go at allowing employers to limit health care they provide to their employees, but they will be up against some hard statistics. A Kaiser Family Foundation survey reports that 63 percent of Americans overall support the mandate to cover the cost of birth control.

And now – some elder poetry. In the comments on last week's poem, reader Dee asked for the sources of these poems.

There is no specific place. I have a file on the computer of poems I've collected from around the web for many years. I consult my collection of poetry books. I search such phrases as “poems about aging.” Sometimes readers or friends have sent me links to such poetry.

There is no rhyme (pun?) or reason to it, Dee. It's all serendipity.

Today, it is Czeslaw Milosz, the Polish Nobel laureate, translator and Berkeley professor who died in 2004 at age 93. The poem is Late Ripeness written when he was nearly 90.

LATE RIPENESS
Not soon, as late as the approach of my ninetieth year,
I felt a door opening in me and I entered
the clarity of early morning.

One after another my former lives were departing,
like ships, together with their sorrow.

And the countries, cities, gardens, the bays of seas
assigned to my brush came closer,
ready now to be described better than they were before.

I was not separated from people,
grief and pity joined us.
We forget—I kept saying—that we are all children of the King.

For where we come from there is no division
into Yes and No, into is, was, and will be.

We were miserable, we used no more than a hundredth part
of the gift we received for our long journey.

Moments from yesterday and from centuries ago—
a sword blow, the painting of eyelashes before a mirror
of polished metal, a lethal musket shot, a caravel
staving its hull against a reef—they dwell in us,
waiting for a fulfillment.

I knew, always, that I would be a worker in the vineyard,
as are all men and women living at the same time,
whether they are aware of it or not.

"The good Lord was our leader and he showed us the way because we were on the right side of this fight."
OMG! More religious nuts. More lives have been lost in wars started over "my religion is right - yours is wrong" than anyone could count.

Cab Comp...
These people fought a long, hard battle in terrible weather against corporate power for many months. Few others would have held out as long as they did. How they choose to express their success is a minor point.

What is NOT A MINOR POINT on this blog is that we do not attack people for their beliefs. Discuss, yes. Argue, certainly. Slurs, no.

If they want to attribute their success to god or to a doorknob doesn't matter.

Let's stick to what's important in this story - they persevered and won a rare win in such circumstances.

"Women and families across America can breathe a sigh of relief that this radical amendment was blocked by Senate Democrats today," "It was absolutely appalling that Republicans forced us to spend days and days dealing with contraception and women's health, but I am hopeful that we can now get back to work on legislation to create jobs and invest in communities across America."

The vote,as you mentioned above, was 51-48. I would like everyone to know who the three Democrats were who voted with the republicans against the best interests of ua all .

Bob Casey happens to be my Senator and I have already written to him informing him that he has lost my support forever.

A winning vote of 54-48 would have looked much better in the record books.

It all goes back to Senator Casey putting his religious beliefs ahead of my health care, and I will try very hard to NEVER give him that opportunity again.

Thanks, Ronni for the heads up about the poems.
Best wishes for the elder occupiers........that's True Grit:) And good riddance to The Blunt amendant.
And what can we "occupy" to get the dopes in congress to back off women? I'm am so disgusted with many of them who seem to be the majority. People are dying, including, young Americans all over this mad world & they have wasted valuable time on women's rights. Shame on them. Dee

Poetry, such a pleasant, civilized contrast to the vile speech of certain radio talkshow hosts.

We should have laws against employers backing out of what I consider to be binding contracts with employees to provide pensions or health care. People plan their lives and retirements around those commitments. Hurray for those WV seniors!

The Blunt amendment tells us why we must care a LOT about who gets into the House and Senate. Presidency is only part of the battle and when we vote for someone in our party, we need to be sure they also share our views.

I'm with Rain on this: pay attention to these characters running for the House and Senate; the Presidency is not the only office that matters.

Also, one other bit of good news from yesterday: we submitted 799589 signatures for an initiative to end death sentences in California. This will be on the ballot in November and we should be able to win it. One small step for a more civilized society ...

Thank you for your blog and Thank You for the beautiful poem. It was a most welcomed surprise which will carry me through the day.

I love one stanza in the poem and it speaks to me. "One by one my former lives were departing, like ships, together with their sorrow."

I am awed by the courage of those elders braving cold and discomfort. They are an inspiration to all.

I find it disgusting that the Blount amendment was defeated by such a narrow margin. I am glad, however, that is was defeated. This battle will have to be fought over and over again as long as there is intolerance and medieval thinking in our midst.

Thanks for the upbeat news on this courageous group of retirees who finally received deserved health care benefits from efforts of West Virginia Democrats. But, as Nancy points out, one of the three Dems voting in favor of the Blunt amendment was also from that state. We, the voters, have to ask more and better questions of candidates--Dems & Repub-- running for office in coming elections.

I feel a lot of hope today, as I read this post and reflect on the wonderful poem.

“One after another my former lives were departing,
like ships, together with their sorrow.”
Nothing says it from the heart as does poetry.

It's time to send an email to my senator to let him know that his vote offended me, deeply. Why is there (another) war on women being waged?

Glad to hear the Occupy group was successful and others outside the area came to their support on Facebook.

Our Occupy Claremont has had the good fortune of So Cal warmer, overall drier weather. They formed last Fall, marching at local banks. I was out of state and didn't learn about their activities until I returned.

They've had recent changes since Tea Party folk have protested their tents, which I've written about. I've met and spoken with some of them several times -- one leader from Move On. They're continuing protests and will be focusing on Claremont's homeless and those whose homes are being repossessed.

I hope they continue to garner local support and support across the country. They, too, have a website, and Facebook site I urge you and others to visit.