Home About Archive Contact
Why Do So Many Elders Vote Conservative?
Lies, Damned Lies and Social Security

With shameless and incessant lust
Thy tremulous hot hands are thrust
Upon my body's loveliness.
O loathsome Age, thy foul caress
Puts on my heart a deadly blight,
Withers my hair to leprous white,
Binds fetters on my eager feet
That once on Springtime's road were fleet
To bear me to Love's shining goal.
Now bitter tides of sorrow roll
To drown me in a sea of woe
And God looks on, and wills it so!

Give over thy pursuing, Age!
Fearest thou not my lover's rage?
For he is young and strong of limb,
Thou canst not stand a bout with him.
Ah, surely he will laugh to see
So wan a suitor wooing me.
Then with wild scorn his heart will swell
And he will fling thee back to hell.

O Love, that stronger art than Death,
Enfold me from the burning breath
Of Age that has grown amorous,
That sears and blasts me. Even thus,
Men say, his passionate embrace
Spoils maids and flowers of their grace,
And every woman's fate is cast
To be his paramour at last.
And so all lovely things are made
Shameful, and in the ashes laid,
To die alone, uncared for. Such
Is the pollution of his touch.

Stars that have shone since Time began,
Rivers that saw the birth of man,
And mountains that are fair and green,
And were, when Helen was a queen,
White dreams that never can grow old,
Stories of love and glory told
By Homer once, and ballads sung
Eons ago--ye still are young.
Tell me the secret of your youth.
Can any weeping fill with ruth
Age, that is harsh and pitiless?

Nay, they are blind to my distress.
They have not feared the grasping hand
Of Age, and cannot understand.
Love saw my whitened hair and laughed
And bid me drain my bitter draught.
While in my lover's startled eyes
A lurking terror strangely lies.
There is no place in which to hide
When Age comes seeking for his bride. 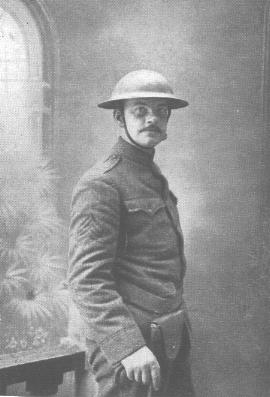 Joyce Kilmer was a prolific poet in the earliest years of the 20th century. He was born in 1886 and died young, age 31, killed in the second Battle of the Marne during World War I in 1918.

Interesting, don't you think, that Kilmer wrote this poem when he was about 26.

TGB readers may recognize Kilmer's name. I recall that when I was a kid in the late 1940s and 1950s, he was well-known as the writer of Trees, a poem that was as much disparaged for being simplistic and sentimental as it was praised. You probably remember how it goes...

I think that I shall never see
A poem lovely as a tree.

A tree whose hungry mouth is prest
Against the earth's sweet flowing breast;

That's all I can stand. I fall into the contemptuous camp so if you're really interested, you will have to find the rest of it online for yourself.

However, on the other side of the critique equation, the poem was popular enough during the mid-20th century that it was set to music and recorded by several artists. Here is Robert Merrill singing Trees on a vintage television program:

At The Elder Storytelling Place today, Mary B Summerlin: Retirement – The Greatest

I did not know Kilmer was among the casualties of World War I.

In addition to being known for "Trees," Kilmer's name was attached to a rest stop on the New Jersey Turnpike in my youth. I always thought that an awkward homage.

And the Joyce Kilmer Forest (or perhaps state park) is in North Carolina, wherein live some of the biggest old growth forest. I keep meaning to go visit, but it's waaaaay out there away from everywhere else.

As Joyce Kilmer was a New Jersey native, we probably learned a little more about him than children in other parts of the country and there are a number of schools named after him. BTW, his first name was Alfred...why is he known by his middle name?

When you are in elementary school "Trees" is an easy poem to memorize and understand. The younger classes often recited it during Arbor Day Ceremonies [Do they still have those?]. Additionally, with its simple words and simple rhyming pattern it helps to explain poetry. Now that I have reread it, I like it.

The NJ Turnpike has a "Joyce Kilmer Service Area". As it provides food, gas, and decent restrooms, I guess it's not the worst remembrance one could wish.

Ogden Nash wrote a parody:
"I think that I shall never see
A billboard lovely as a tree.

Indeed unless the billboards fall,
I'll never see a tree at all."

SusanG...
Love the Ogden Nash parody - I'd never heard that.

I had to memorize "Trees" in grade school. I can still recite most of it. I won't say it a favorite of mine but it's obviously stuck with me.

Maybe you have to be a Jersey native...

I checked to see if my memory was exact and found the Nash parody two ways with the alternate having the line "Perhaps unless the billboards fall."

"Trees" is the only poem of his I recall reading. Not surprsingly, I read this one from the point of view of an aging woman, and it fit perfectly. Amazing that he was only 26 when he wrote it.

The line, 'And God looks on and wills it so' reminds me of a passage in Sebastian Barry's novel, Anne Dunne. "...it is the declensions of age that are at fault, the very faulty arrangements of our Lord for such as we become. If this is blasphemy then the Lord will have to forgive me."

I think it is interesting that he characterizes age itself as a lover, but a predatory, competing lover.

Much as we may not like it, the physical changes that come with age ARE unattractive. The specter of the approaching grave can be horrifying and repulsive to young people. Obviously this repulsion can be overcome, but it is still present.

As Bill the Cat would say "Ack!" and "Pbthhh," on Kilmer. One man's fear of old age in women. Repeat "Pbthhh."

I thought the poem was powerful but depressing. Could that be because I'm old and my body is one of great age?

I think "Trees" is a classic that all school children had to memorize no matter what part of the country they lived in.

I do have to say that using the poem makes for better song lyrics that the lyrics I hear in today's 'so-called' music.

It's true, there is a rest stop named after Joyce Kilmer on the New Jersey Turnpike,and Mr. Kilmer is in very good company,I might add.

Also, thanks to Ladybird Johnson,many of those billboards did fall and you can see lots of trees while traveling on the NJ Turnpike.

I have the dubious pleasure of being a fellow alumnus of Joyce Kilmer.We both graduated from Rutgers Preparatory School in New Brunswick, NJ, although I was a little young for World War I; I graduated in 1959. Joyce was a native of New Brunswick, as am I, and his home has been turned into a museum, the Joyce Kilmer House, on Joyce Kilmer Avenue (the former Codwise Avenue, renamed in his honor).I'm afraid that Joyce's "Trees" was held up to us in English class at Prep as an example of purple poetry; we much preferred the Ogden Nash sendup.

I've always liked Trees. You can
see glimpses of the style he uses in Age. That would have been a good poem if he had stopped after
the first stanza. It becomes cloying afterward.

It's interesting that he was writing of aging at 26. I remember that the most difficult "marker" birthday for me was 30. I thought I was terribly old because I was single and not even dating anyone. Most of my female friends were married with children by then.

I was relieved to discover that the author was only 26 - I'd hate to think anyone in the senior age group felt so bad about ageing! Like Nancy I remember my 26th birthday was a particularly depressing one - for the opposite reason from Nancy - I was married with four children!
So we can sympathise with Joyce and feel sad that he never lived long enough to learn that life gets better!

He wrote that when he was 26? For a mere kid he sure was an old fart!

Goes to show I can always learn something new: I never knew Joyce Kilmer was a male!