Half past twelve. The time has quickly passed
since nine o'clock when I first turned up the lamp
and sat down here. I've been sitting without reading,
without speaking. With whom should I speak,
so utterly alone within this house?

The apparition of my youthful body,
since nine o'clock when I first turned up the lamp,
has come and found me and reminded me
of shuttered perfumed rooms
and of pleasure spent—what wanton pleasure!
And it also brought before my eyes
streets made unrecognizable by time,
bustling city centres that are no more
and theatres and cafés that existed long ago.

The apparition of my youthful body
came and also brought me cause for pain:
deaths in the family; separations;
the feelings of my loved ones, the feelings of
those long dead which I so little valued. 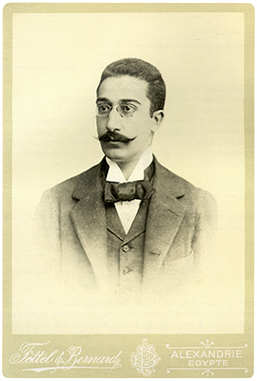 Constantine P. Cavafy was a widely admired Greek poet born in Alexandria, Egypt, in 1863. Following a few years with his family in Liverpool, England as a youth, he returned to and lived out his life in Alexandria.

He worked as a journalist, then as a public servant throughout his life while writing his poems. At first, he was recognized only in the Greek community of Alexandria, but later in his life became known in Greece itself. His poems were published privately until after his death in 1933 on his 70th birthday.

His home in Alexandria is now a museum where some of his original manuscripts and sketches on on view.

Thanks for reprinting, but there are important stanza breaks in this poem after lines 5, 14, and 19.

Have always liked Cavafy. Thank you for this reminder.

Be good to people as you go through life. Then you don't have regrets.

Daniel Mendelsohn...
THAT'll teach me to accept the first reprint I look at online. Mea culpa.

Readers: In 2009, two books of Cavafy poems were published with translations, introductions and commentary by Mr. Mendelsohn.

The books were highly praised internationally by people, like Mendelsohn, who know a lot more about poetry in general and Cavafy in particular than I do.

So I think I'll admit my ignorance and take his word for those stanza breaks.

You can find out more about Daniel Mendelsohn's Cavafy books here.

Thank you for posting this and the conversations that followed.

The poem.......much appreciated & the following remarks prove once again that we're never too old to learn! Nice way to start the day. Dee

Just paused for a moment or two & the read the poem once again & then again. Ronni, thanks, I just love this blog & all who stop by:):)Dee

Cavafy just shows that lamenting the loss of a youthful body is not limited to women.

Do we ever fully appreciate someone until they're gone? Only in our loss do we fully understand how much they meant to us in life.

I had never heard of him before today. I also read the poem numerous times appreciating the artist and what he says that speaks directly to me. Thank you.

Thank you again for another great insight into the aging process. You do such a great job of putting our thoughts and feelings into words.

I haven't read much of Cavafy's stuff but I discovered his poem 'Ithaca' many years ago and loved it. In a way it, too, is an elder poem with a strong message of wisdom. http://users.hol.gr/~barbanis/cavafy/ithaca.html

That time of year thou mayst in me behold,
When yellow leaves, or none, or few do hang
Upon those boughs which shake against the cold,
Bare ruined choirs, where late the sweet birds sang.

In me thou seest the twilight of such day,
As after sunset fadeth in the west,
Which by and by black night doth take away,
Death's second self that seals up all in rest.

In me thou seest the glowing of such fire,
That on the ashes of his youth doth lie,
As the death-bed, whereon it must expire,
Consumed with that which it was nourished by.

This thou perceiv'st, which makes thy love more strong,
To love that well, which thou must leave ere long.....

How fortunate are we to have had such great poets express our thoughts so well.

Cheers to Cavafy and Shakespeare.......and cheers to Ronni for bringing poetry to our attention.

This one hit me to the core - very poignant and evocative.

I appreciated Marian's link to Ithaca too. I sent it to my granddaughter who is heading out to some exotic places this summer and fall for study abroad.

Another winner, Ronni. Thanks!