Home About Archive Contact
What Do You Know Now About Getting Old...
ELDER MUSIC: Hobo

TEXTING FROM HILLARY
It's been all over the web this past week and if you haven't been following the game, you're not having fun: 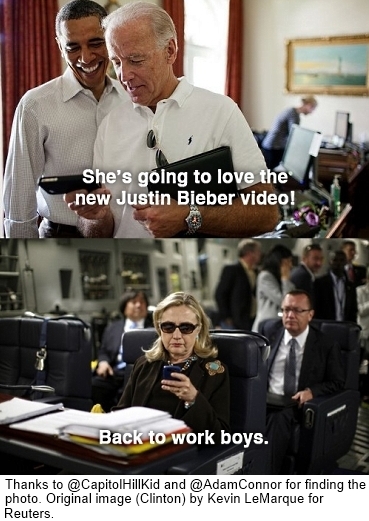 It started as a joke in a bar after seeing a photo - a power shot if you will - of Secretary of State Hillary Clinton aboard a military plane wearing a pair of super cool shades.

Mix that with the LOLcat meme and you've got – well, Hillarity (sorry). Even Hillary herself checked in (she loves it). The game is over now but if you missed it, there are a whole lot more images to catch up with here.

HOW BASEBALLS ARE MANUFACTURED
Generally, sports mean less to me than nothing so you can imagine how little I care about the minutiae.

But this video Darlene Costner sent about how baseballs are made is fascinating. Who knew, in our supposedly high-tech world of factory robots, that it is such a hands-on process.

IPSEDIXITISM
The TGB Musicologist, Peter Tibbles, sent this along and it is our Word of the Day which I am certain you will appreciate during our never-ending political season. It's from an Australian blogger, Chrys Stevenson. Here is her definition:

Ipsedixitism is a dogmatic statement which assumes that no supporting evidence is needed. It assumes that the assertion will be taken ‘on faith.' It doesn’t mean a statement is true; it means the propagandist assumes that if they say it, nobody will bother checking the evidence.

REAR WINDOW TIME LAPSE
Certainly, many of us who read this blog have seen Alfred Hitchcock's 1954 thriller, Rear Window. Maybe, like me, you've seen it more than once and even if not, you know the premise: a man who is confined to a wheelchair in his Greenwich Village apartment (Jimmy Stewart), becomes convinced from watching the activity out his window that a murder has been committed.

Day in and day out through the movie, we see his patch of Greenwich Village through that rear window and now, in one of the most clever ideas I've heard of in a long time, videographer Jeff Desom has stitched together all the scenes of the tenants who face that back courtyard. Amazing and wonderful.

NOTE: Personally, I find the music rather awful and certainly distracting. You might want to turn off your audio for this video.

AGE IN ACTION NEWSLETTER
One of the best publications about aging comes from my friend Ed Ansello at the Virginia Department for the Aging. This quarter's issue of Age in Action includes a story on hoarding, dementia care, the Road Scholars lifelong learning programs and more.

You can read Age in Action online here [pdf] and you can receive it via email just by letting Ed know in an email: eansello@vcu.edu

DOLPHIN RESCUE
This apparently ad hoc effort to rescue dolphins that had washed up on a Brazilian beach is heartwarming to watch. Hat tip to doctafil.

METROPOLITAN DIARY
For many years and long before the internet, The New York Times published a column, Metropolitan Diary, on Wednesdays with short, quirky true stories sent in by readers. They once published one of mine. Then, at some point, the column disappeared.

Now, however, it is back - at least in the online edition. Here is a city tale from Times reader Pat Rapp:

”Dear Diary:
“On Lafayette Avenue in Clinton Hill, Brooklyn, I was outside the local grocery store, locking my bike to the railing, as an elderly woman moved slowly toward the store, inching an aluminum walker forward along the sidewalk.

“She was a large woman, in a big flowery hat, and a big cloth coat opened into the walker. As she moved up alongside me, bent over my bike lock, the words coming so softly lifted my head to look and listen.

“'That’s a nice bike,' she said, ceaseless with the walker. 'Want to trade?'”

Funny – really funny. And also a terrific reminder that just because our bodies can fail us in old age, that doesn't mean our minds are not just fine.

SOCCER MOMS? HOW ABOUT HOCKEY GRANDMOMS INSTEAD?
It was hard, this past week, to miss the 86-year-old gymnast, Johanna Quass. She was all over the web looking – sort of – like a teenager on the parallel bars.

As I have indicated in the past, I always feel queasy about the promotion of elders doing extreme sports whether in general or just something unexpected in an old person like Ms. Quass. It somehow implies that if you're not bungee jumping at 75, you're slacking off, and I don't like that.

What I do like, however, is this interview with a resident at an Erickson community in the Detroit area who, at 65, took up playing hockey. Diane Pieknik just wanted to try it and now she plays weekly with a team, the Voodoo Dolls, of other beginners. Take a look.

HELP OVERTURN CITIZENS UNITED
Senator Bernie Sanders' home state senate passed a resolution seeking a Constitutional Amendment to overturn the Citizens United Supreme Court decision to clarify that "money is not speech and corporations are not persons under the U.S. Constitution."

Next Wednesday at 11AM local time in Washington, D.C. there will be a summmit featuring Senator Sanders and others to help move forward this amendment initiative. If you live in the area, perhaps you could attend? Read more here.

WHAT A WONDERFUL WORLD
Nothing I can say about this from BBC1 can make it any better than it is. Gorgeous. Hat tip to TGB reader Gene Biegel

Fun with Hillary was just that - fun.

The Dolphin pod must have had a leader that led them astray - kind of like a Fox TV listener.

The Wonderful World video was a refreshing escape from the harsh realities of the political scene.

Fun with Hilary was so "today", and I marvel at her job. She just appears so weary, but also determined & dedicated & I really do admire her. Also, I agree with Darlene that the Wonderful World video was a refreshing departure from us humans:) Dee

Delightful indeed. My other half informs me that baseballs have a very short life...as if you were interested. They average lifespan is 7 eight pitches. Often they foul out or are home runs. That's one use only.

I believe that was Alfred himself in the far right window at 1:07 - the man playing the piano on the right and AH looking at something in or on a chest at the left of the pianist. (Best viewed with full screen version of video) What do you think?

Hillary Fun was very enjoyable. The dolphin rescue was heartwarming, although it makes you wonder how often dolphin engage in this behavior and there's no one around to save them. The baseball production video was very interesting. I never would have guessed how labor intensive this is, and I would not want to be one of the seam stitchers. And the Rear Window piece was fascinating. It just amazes me the projects people take on that appear to be incredibly laborious and painstaking, but which produce exquisite results. And I had seen the Wonderful World version before and loved it just as much this time as before. Thanks, Ronni, for another entertaining Saturday.

I am happy to see that one of our best, Keith Ellison, is hosting with Bernie Sanders. The BBC video has now been posted to my FB page. I love it. Always interesting to check in to TGB on Saturdays. Thanks.

Stories from today's post are acutely uplifting.Keep them coming.

I had heard there was a movement to overturn that Supreme Court ruling. Hope you continue to follow up on what's happening with that, since Congress really needs to act.

Could this current Congress actually act in a nonpartisan manner on this issue? I'm not convinced the Repubs. want it overturned -- don't want individual voters to have too much power.