MUSIC MAN MURRAY
Murray Gershenz runs the Music Man Murray's record shop in Los Angeles where he keeps what is probably the largest private collection of vinyl recordings in the world – tens of thousands of them.

His quest to sell the shop is not going well. Murray has lately taken up acting – character roles on television (e.g. Mad Men) and film. Murray is 89 years old.

Richard Parks has produced a charming documentary about Murray that is a beautiful tribute to the man, his life and his passion for music. Here is the trailer for the 20-minute film:

Music Man Murray premiers tonight at 8:30PM on the Documentary Channel (267 on DirecTV and 197 on DISH). You will find more information here.

It is also available for streaming online for one week beginning today at the NPR website, All Songs Considered – an elder movie you should not miss.

NO ONE CALLED ME SLUT
In the current anti-woman climate in which too many men (and some women) seem determined to turn back the cultural clock to about 1910, a story with the above title on the opinion section of last Sunday's New York Times leapt off the page for me.

In 1978, wrote Susan Heath, five years after the Roe v. Wade decision, she sought to end a pregnancy.

”I’m pregnant but I’m not trapped.

“All I had to do was call the clinic and make an appointment. I don’t have to be ashamed or terrified, because brave women before me fought to make abortion legal, have gone public with their stories of shame and terror and made sure that no woman ever again has to die from a back-alley abortion or bear an unwanted child.

“We park and walk up to the entrance. No running the gantlet between pickets shouting at me that I’m a murderer, no fear that someone will throw a bomb. The receptionist takes my name...”

Go read the whole thing – the story of how women's health is supposed to work and that we are in danger of losing. Thank you for the reminder and brava, Susan Heath.

KANGAROOS HAVE THREE VAGINAS
As long as we are on the topic of reproduction, did you know lady kangaroos have three vaginas? I sure didn't, and other marsupials like koalas, wombats and Tasmanian devils also have three. 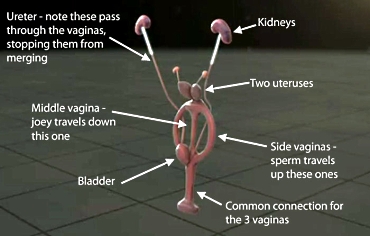 In addition, the males sometimes have two-pronged penises. At least, that's what Discover magazine tells me. It's all quite complicated compared to mammals like you and me. There is more explanation here.

ELDERS AND THE U.S. POST OFFICE
The U.S. Postal Service is about to be drastically downsized due to draconian fiscal requirements initiated by Republicans that are imposed on no other federal agency. Their long-term goal is to privatize the service.

Everything possible should be done to stop these closures for many good reasons. But Senate Majority Leader Harry Reid's reason last week is idiotic, ageist and is more a hindrance to defeating the downsizing than a help. Take a look:

THE DANGERS OF TEXTING WHILE WALKING
Texting while driving is a growing civic problem. People have been killed when the driver was distracted by his or her smartphone. On the other hand, texting while walking usually harms only the texter as this video demonstrates.

The poor guy looks up from his tiny screen to confront a bear - yes, a bear - coming at him. It's a bit blurry and hard to see, but the news report provides a slomo version at the end so stick around for that.

SAME-SEX TAX RETURNS
It has been a long, hard-fought battle for gays and lesbians to achieve equality with heterosexuals in terms of marriage, but state bans are falling swiftly these days.

Nevertheless, after reading a news story sent by Jan Adams of Can It Happen Here?, homosexuals may want to rethink the goal of marriage parity.

”Because same-sex marriage laws vary from state to state, how a unioned couple may file in each state they live and work also varies. Civil unioned New Jerseyans who work in New York, for instance, have to prepare six or more tax forms while heterosexual couples need only prepare three.

“This year, Denelsbeck and Javins had to prepare seven, at a cost of $925.

"'Every year it’s more and more stressful and frustrating,' said Denelsbeck, who lives with Javins, 40, in Jersey City.”

Oy, the law of unintended consequences kicks in again. It may take several more years, but once the entire country is in agreement on gay marriage, this annual tribulation should end. You can read more here.

AUDITION SURPRISE ON BRITAIN'S GOT TALENT
At first, Simon Cowell is his usual skeptical self in this audition of Only Boys Aloud Welsh Choir for the program, Britain's Got Talent. Watch what happens. (Hat tip to doctafil of Jive Chalkin')

PRESIDENT OBAMA ON THE ROSA PARKS BUS
When, on that now-infamous day in December 1955, Rosa Parks refused to give up her seat on a bus in Montgomery, Alabama, the birth of infant Barack Obama was still six years in the future.

Last Wednesday, while at the Henry Ford Museum in Dearborn, Michigan to give a speech, Obama took a few minutes to sit a spell on that very bus. I like this photo of the moment. ANTHONY ADAMS EXPLAINS THE ECONOMY
I picked this up a few days ago from Jan Adams' blog. In honor of tax day, she posted the video of unemployed engineer, Anthony Adams, explaining the tax system and debunking the myth that cutting taxes creates jobs.

It really is as easy to understand as he shows which only means that our so-called representatives in Washington are deliberately trying to fog up the issue. But you already knew that, right?

CAT AND DOLPHINS
This video look familiar, like something I've posted before. But my memory is that this one is better quality, a little longer and therefore more interesting. Or maybe it's my memory that's failing. Even if that's so, it's worth another view. Enjoy. (Hat tip to Darlene Costner)

The Welsh are well-known for their music. According to my family, the tradition of the men's choirs started in the mines, with the men from the various mines competing. If you ever attend a Welsh church service you will hear the hymns sung in at least four parts.

Don't pass up a chance to attend a Cymanfa Ganu (Welsh Singing Festival) or an Eisteddfod (singing, poetry, etc.). They are held worldwide.

If you enjoyed the Only Boys Aloud performance, you may enjoy We'll Keep A Welcome in The Hillside Tradition says that when a Welsh family was getting on the train to emigrate the townspeople would sing this at the station as the train pulled away.

Poor 'roos. Think of the female problems they must have!

As a record collector, I'm looking forward to watching the Music Man Murray doc at NPR.

The Only Boys Aloud video was wonderful!

Bert...
You may be waiting for when you have more time to watch Music Man Murray, but I want to be clear that it is streaming now at the NPR link.

As usual. Marvelous. Now I have to learn how to do streaming video.

Loved the Only Boys Aloud piece, hope it gives each and everyone of them a chance in this rough world.

Perhaps Harry Reid is losing it. His idiotic explanation of the the Secret Service Scandal was that an agent, sent to Columbia, is stupid for getting into a fight with a prostitute.Huh? Is this proper conduct for someone representing the US Govt in the elite Secret Service yet? Where is the larger picture; according to Reid that's OK as long as one doesn't get caught having a fight with a prostitute. Maybe HE is reading too much junk mail!

ASs someone whose career started in radio when vinyl 45s were all that existed, I am certainly going to watch the movie about Murray.

The picture of the President is poignant. It shows how the being the most important man in the world is also the loneliest.

Britain's Got talent does come up with the some wonderful performers and the Only Boys Aloud is no exception. It is just wonderful to see the joy on those young faces.

I really liked the Music Man Murray documentary. People who have this sort of passion, coupled with the ability to put something like this together and keep it together for so long, just amaze me. I hope something comes through for the store; it would be such a loss if that collection is just pieced out for pennies on the dollar.

Thanks for all the enlightment and entertainment again today, Ronni.