Home About Archive Contact
What to Do With Your Ashes
ELDER POETRY INTERLUDE: Do Not Go Gentle into That Good Night

Older Than My Old Man Now

EDITORIAL NOTES: If anyone has been waiting for me to answer an email for more than three or four days, it is probably to do with spam filters at your end.

I have been getting a lot of returns of sent mail lately and my email provider tells me they are not blocking it. Sorry, but I've spent all the time I possibly can on this problem now.

It's been awhile since I last received a submission for Where Elders Blog, but there is now a new one from Karen Zaun Kennedy which you can see here. And here are instructions for submitting your own blogging/computer space.

Peter Tibbles usually handles the music around this blog on Sundays, but I'm taking on this new album from Loudon Wainwright III, Older Than My Old Man Now, because it is entirely concerned with getting old. 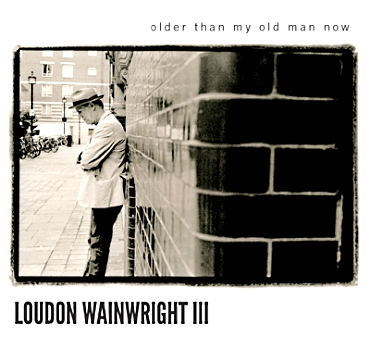 The album interests me not so much for the music - although that's part of it, of course – but for my curiosity about how an artist who is a contemporary of mine, approaches “my” subject.

The answer is, with a lot of melancholy, mixed feelings and woe for everything that has gone wrong in his 65 years. It is deeply – and often literally - autobiographical, these 16 songs, wherein Wainwright covers family, marriage, divorce, kids, health, sex, regret, guilt, mortality, death and just plain getting old.

And he does it all with some sadness, a good deal of humor and an occasional bit of wisdom. The title tune, Older Than My Old Man Now, begins with a reading of words about his own life written by Wainwright's father, a respected columnist and editor at Life magazine.

There is a second recital of Loudon Wainwright, Jr.'s writing on his own a aging as the introduction to The Days That We Die.

Among the singers who accompany Wainwright on various tunes are all four of his kids, a current and a former wife and Ramblin' Jack Elliott who takes opposing verses on a lovely song, Double Lifetime.

Not all is serious and melancholy. My Meds is what you would expect – a humorous litany of the long list of prescription drugs some people our age are stuck with keeping track of.

And I Remember Sex is a duet with Dame Edna Everage (Barry Humphries) that is labeled “explicit.” Actually, the lyrics are both true and funny. Here's a sample:

I remember sex. That thing we used to do
Where you'd lay down and usually I'd lie on top of you
Sometimes you'd lie on top of me. We tried that out a bit
But it didn't work as well, I guess something just didn't fit

I remember sex. We had it at night
A few times in the morning and then after we would fight
And on special occasions when we'd had too much to drink
Once in a Morris Minor, a convertible, I think

Although no one would call me a fan of Loudon Wainwright III, I've enjoyed him from time to time over the years and I think he's done a nice a job here with a large number of the kinds of things we ruminate on as we reach the upper decades of life.

He has a darker view of his life and old age than I do but then, he's been writing autobiographical songs for nearly half a century so undoubtedly has better reminders of past events than I can dredge up.

The album is available in all the usual places. At Amazon, the CD costs (currently) about US$13. You can download it as MP3s for only US$8.99 (or 99 cents per song) and with that you'll get an extra that is not on the disc, No Tomorrow.

I don't know for how long it will last, but as of yesterday afternoon, you can stream the entire album at the New Yorker website.

I read this post right after seeing photos of the Medal of Freedom ceremony. There was Bob Dylan—such a transformation from the Freewheelin' Bob Dylan etched in my memory!

I listened to the whole CD and I thought every song was well-done and true. It seemed like a pretty raw confession of the artist's own life and feelings. I enjoyed the whole thing.

Funny about you putting Louden Wainwright's "Older Than My Old man Now" up today, because I was just thinking the other day that in December I will be 84 and that is older than my Mother was.

Maybe I'll write a song for either you or Peter to put up in January. "Older Than The Old Girl NOw."

You do find little treats that I would otherwise miss Ronni. Thanks for this one.

I still have 15 years to go before I’m older than my old man.

Thanks Ronni. Loved the album - even more the second time I listened to it. I may listen again right now. :)

Well, I think you picked the best of the tunes to share here after I listened to the entire album.

I'm always intrigued when someone only 65 yrs laments old age. I wonder what they'll think when they really get old?

I guess "old" is a relative term, much like "beauty" -- all in the eye of the beholder or whoever is experiencing it.