Peter Tibbles and the AM in Oregon

You probably noticed that I wasn't here last week – instead, playing host to Peter Tibbles who had arrived all the way from Melbourne with the Assistant Musicologist (AM).

Surely you know the two of them: Peter who holds forth on Sundays at this blog with so much knowledge and wit about all things “Elder Music” with lots of input from the AM.

After spending a week or more in California during what Peter described in email to me as “paradisical weather,” he and the AM did not see the sun for the five days they were here – just buckets of rain. Well – hey, it's Oregon.

Even so, it was the most and heaviest rainfall with no breaks worth speaking of crammed into five consecutive days that I've seen here since sometime last year. But we didn't let that stop us.

One day, after lunch at Jake's Crawfish restaurant, we spent an afternoon at (where else in Portland, Oregon, with three heavy readers needing to get out of the rain) the world-famous Powell's Books – an entire city block and an annex of new, used and rare books.

Peter found me a copy of a book about a Melbourne detective. For Americans, it has a handy glossary in the back so I'm able to translate such Aussie words and phrases as chook, dob, panelbeater, spaggy bol and Macca's - the last being a popular name for McDonald's.

Most of our visit revolved around food and wine – at home and out-and-about in northwest Oregon. We did the “waterfall tour” along the Columbia River Gorge stopping at most of them. This is Peter in the woods at Waukeena Falls. 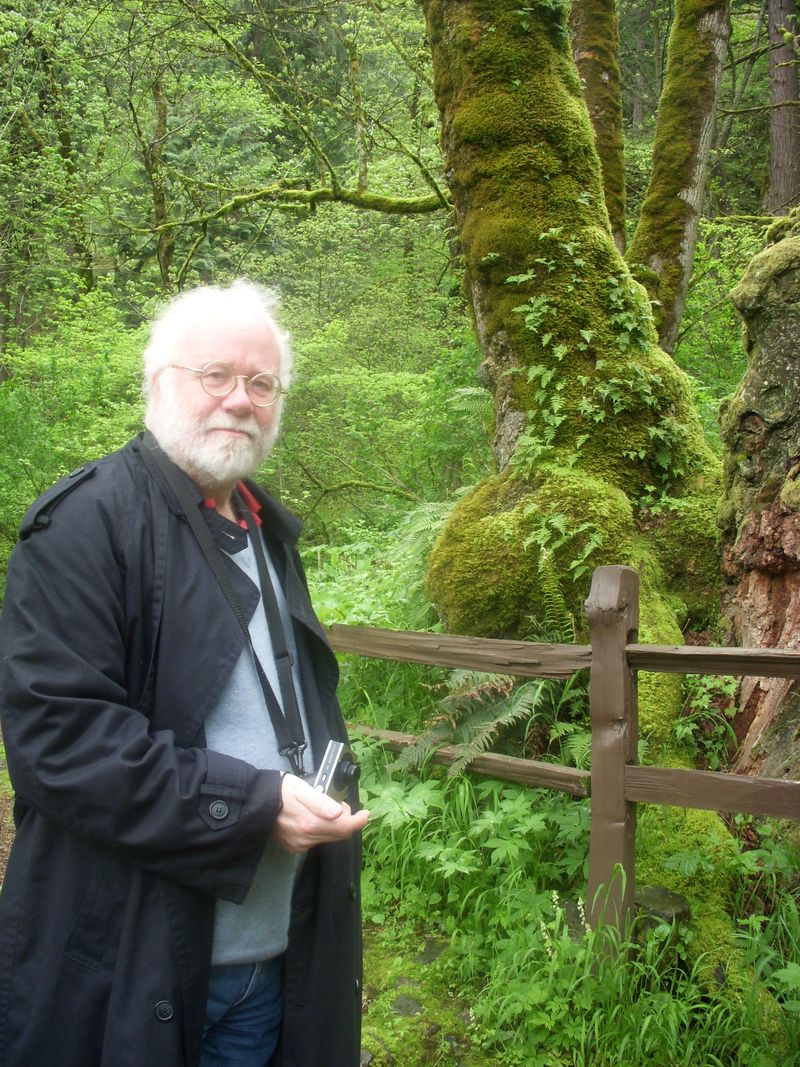 And more of Peter in the woods while in the distance, you can catch a glimpse of the AM. 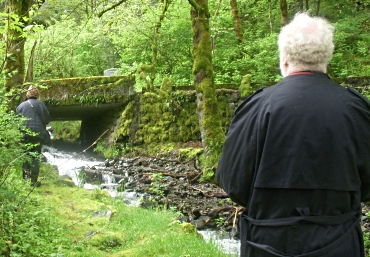 All along the “old highway” in the Gorge are beautiful small bridges built by the WPA during the Great Depression in the 1930s. Peter liked them as much as I do. 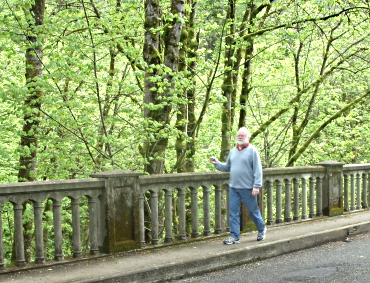 The major destination of such a trip as we took is Multnomah Falls. It was a regular Sunday drive for my family when I was a kid and the AM took a lot of photos while we were there.

We stopped in at the lodge there for lunch – excellent rainbow trout and some nice Oregon wine. 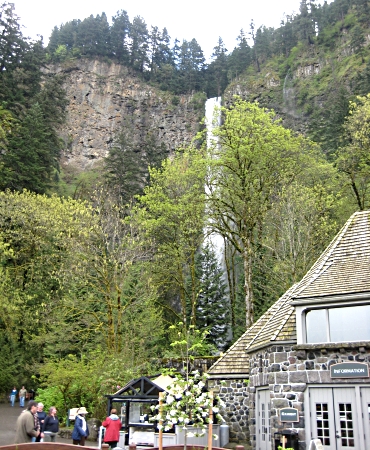 We were lucky that for the most part, the rain stopped for awhile at each of the falls we visited and on occasion the sun peeked out for a few minutes.

No driving trip up the Columbia River Gorge can be said to be complete without a stop for the spectacular view at Vista House. When we were there, the storm clouds in the distance were dark and threatening and beautiful. 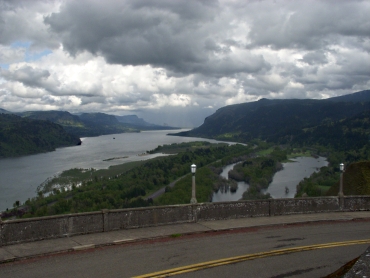 Another day, we drove the opposite direction to the coast – specifically, Astoria at the very northwest tip of the state where the Columbia River rolls into the Pacific Ocean.

Up on a hill, there is a column dedicated to John Jacob Astor, merchant and business man who, among other things, helped open the west in the early 19th century. It was way too rainy at that moment to spend much time. 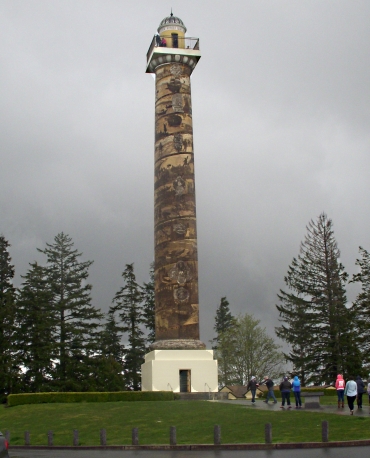 And definitely at our ages, we did not climb the interior circular staircase to the top but a few, much younger people did.

Instead, we had an excellent brunch at the Columbian Cafe, an Astoria destination for the past 30 years where chef and New Orleans native, Uriah Hulsey, holds forth.

Here is Peter at the door of the Cafe just after my brother, sister-in-law and the AM had entered the establishment. 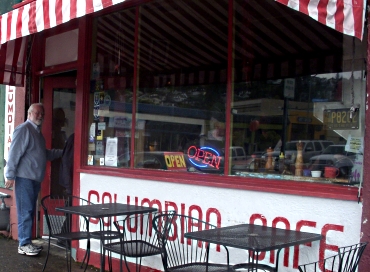 When we were not eating out, we were eating at home and here's a photo of Peter and the AM after dinner one evening. 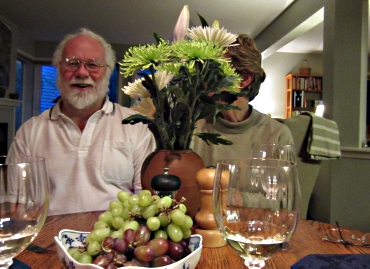 It seemed no time at all before Peter and the AM were off to Idaho to see family there. The AM then heads to the east coast of the U.S. while Peter stops back in Portland for a few more days with me before heading back to San Francisco and, in time, home to Melbourne.

I was teary when I dropped the two of them off for the next leg of their trip and I look forward to Peter's return this week to soak up some more time with him.

But I will never forgive scientists. After all these years, I think they have had enough time to create a real-life Star Trek transporter so I could say, “Beam me to Melbourne, Scotty” any time I want to visit Peter and the AM.

(Peter, who knows far more about scientific things than I do, says science has a lot further to go than I imagine to create a transporter.)

At The Elder Storytelling Place today, Brenda B. Berretta: Mr. and Mrs. Dove

How neat. That sounds like a perfect trip whether the weather cooperated or not. I heard from friends up there that this week should be better; so maybe he'll get to enjoy another side of Oregon. those were beautiful clouds in the sky

Sounds like a nearly perfect visit for your coterie.

Scientists are working hard to come up with enough entangled particles to make your transporter dreams come true.

Would you say that AM is camera shy? She does well behind the lens.

That beautiful portrait of Peter Tibbles (displayed at the top of your column) is the one that should appear on the dust jacket of the e-book he should write. It has to be the kind of book where his musical selections can be played with the touch of a finger.

I'll second the wish for beam travel. And you might as well tell us the author of those Melbourne detective mysteries. Some of us are always on the look out for good authors.

We visited Oregon for the first time about two years ago so I especially enjoyed your references and photos of familiar places (and some new ones to visit next time). Multnomah Falls is remarkably beautiful- even in the rain. Can't wait to return.

I just found your blog and will check in again. Thanks for sharing.

Loved the pictures! I laughed at your comment about Beam me up Scotty. I tell everyone in my family I will volunteer to go first. I have a physicist nephew who will help - we laugh that he'll call my sister and say i have good news and bad news - Auntie is in Paris. The bad news is She's all over Paris!

You've made me want to visit Oregon. Thanks so much for the photos.

So what was the book Peter bought for you? One by Ngaio Marsh? Are there other Australian mysteries we need to know about?

Seems there are several of us who would like book recommendations.

So, what was the name of the book?

Rain or no rain, you had a good time and I am sure that Peter and AM will have fond memories of their visit.

I'm jealous as I would love seeing those spectacular Falls and chatting with you, Ronni.

Yup! You gave Peter and the AM a very nice tour of your part of Oregon. We live on the central coast so very gorgeous too. Any chance to include Crater Lake when Peter returns? The eastern parts (north and south) provide entirely different vistas - vast desert scenes with gorgeous colors. How can a state be more varried and beautiful? We will miss all this as we try to return to Calif to be near families. Could Peter get us a photo of the AM?

For detective novel fans, the book is The Broken Shore by Peter Temple. I'm halfway through and loving it. It's hard to set aside and get other work done.

Temple is enormously well regarded, has won lots of awards and in addition to this book about detective Joe Cashin (and other stand-alone novels), he writes a series involving Jack Irish.

You can find out some more about Temple here.

Plenty of contemporary Aus mystery writers, but maybe not readily available. The one we found for Ronni was by Peter Temple who writes standalone novels plus an entertaining series about a character called Jack Irish. Another favourite author is Shane Maloney, whose ongoing character is a nicely cynical political fixer. These books are set in and around Melbourne. We'd love to hear how you fare with the Aussie references.

Darlene, I think, no I know, that those are the best photos you'll see of the A.M.

Oops, sorry, that should read Gail not Darlene who asked for a photo.

Peter Temple is a treasure and The Broken Shore a pleasure to read, though it's also harrowing. As soon as I finished it I read it straight through again. His novel Truth isn't exactly a sequel but is set in Melbourne with some of the same characters. It is every bit as good, and I read it twice, too.

Hope you gave Peter and his AM a big hug from all of us devotees.

What a joy to have them with you, thanks for sharing details, and another author for us.

Sounds like a great time in a beautiful place. I was beginning to wonder about the AM, whether she really doesn't like having her picture taken, or if this was a bit of a joke. It reminded me of the philosophical neighbor on a TV show of a few years back, "Home Improvement" with Tim Allen. We never saw the neighbor's face. It was usually hidden by a fence, but he was a significant part of the show.

I really enjoyed our mini tour of Oregon with you, Peter and the AM. Thanks for taking the time to take photos and share!

Sounds like a marvelously enjoyable visit and delightful sightseeing. Storm clouds can be magnificent to view. Glad you could have that time.

Am envious of the Powell's time. It's still on my list and think Cowtown Pattie once mentioned a big book store in Texas, but am less likely to get there from Calif.

I like the "beam me..." to Australia and elsewhere, too. Have been curious about Perth since my bro served there in WWII. He recently told me the daughter of a now-deceased girlfriend he had while there surprisingly contacted him a few times recently -- wonders of the Internet.

Peter should check out music at Portland's Jimmy Mak's -- I just wrote about it.

You make Oregon more appealing than it already is Ronni. Thanks

I enjoyed this post and the pictures so much! You certainly did not let the rain get in your way and instead were the perfect host to show off some of the best things about Oregon. Would you believe it that I have still not visited the Vista House or Multnomah Falls? Ridiculous. But my excuse about the falls is that I live 14 miles from Silver Falls State Park and they are pretty spectacular.
Peter and the AM look like fine people. I'm glad you had a great visit and that they were able to meet your brother and sister-in-law.

What fun! Thanks for sharing!