Ten days ago or so, I posted some photos of Time Goes By Elder Music columnist Peter Tibbles and his Assistant Musicologist, Norma, during their stay with me here in Oregon.

On 3 May, I saw them off to Idaho where they visited relatives. A week later, the AM flew to the east coast of the U.S. to see friends and Peter returned to my house for a few more days.

Among the interests Peter and I share is food and wine so a lot of our time was expended on thinking about, talking about, shopping for and preparing meals. What I did not realize until now, as I was going through the photos, is that we might as well have been in Japan. 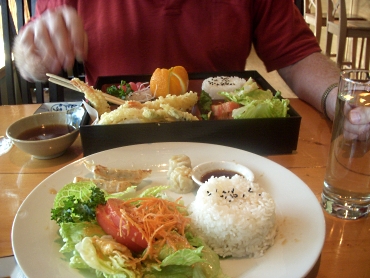 That, above, is part of our meal at the excellent Japanese restaurant in Lake Oswego, Kurata, where we had lunch one day. And here is Peter at another excellent Japanese lunch at Mio in Portland a few days later. I've forgotten what the waving around of the $10 bill was about. 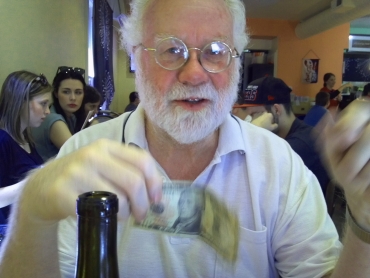 After Peter described a salmon and black bean dish he likes to cook, we made a trip to the nearby Japanese supermarket, Uwajimaya, to purchase supplies for the dinner. Here is Peter deep into preparation: 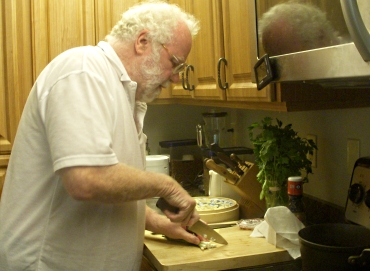 Here are the salmon and black beans ready to steam. 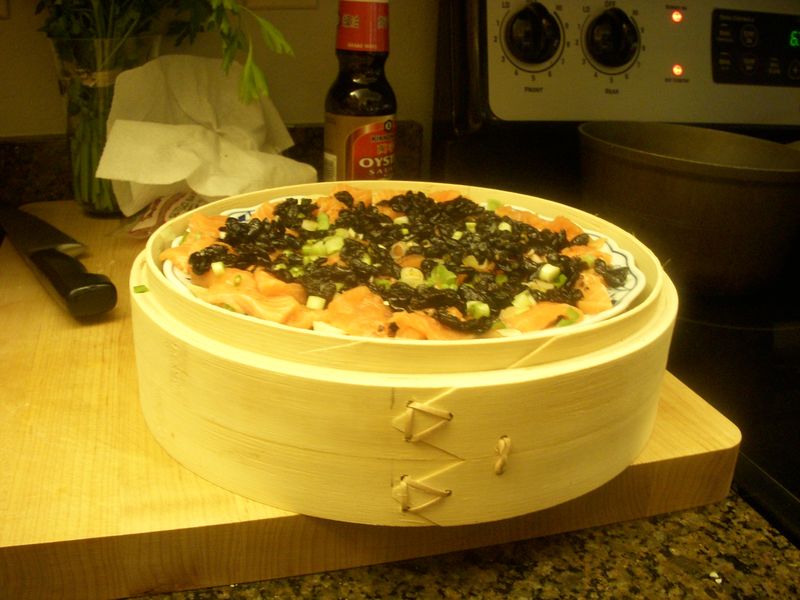 While Peter played chef for this meal (and many others at home), I set the table. 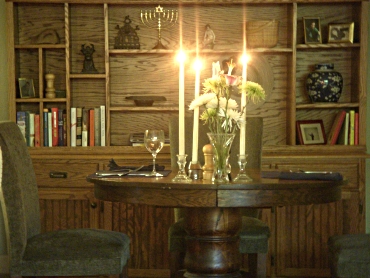 It was a glorious meal that I will try to repeat on my own sometime soon. 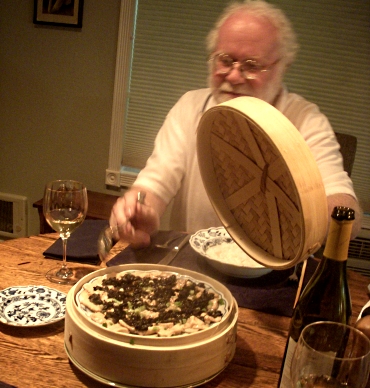 In past posts about Ollie the cat, I've told you how shy he is when people visit – straight under the bed he goes when anyone who is not me walks through the door. Maybe it was the length of Peter's stay or maybe he really, really likes Peter or maybe in his old age, Ollie is relaxing – as he did in this chair. 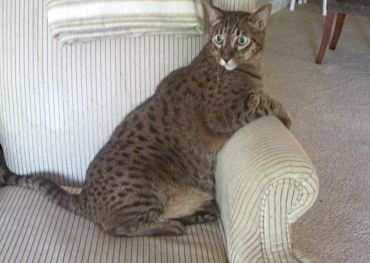 He even allowed himself to get oh-so-cute while Peter was here as in this poorly lighted shot of him peeking at us in the dining room. 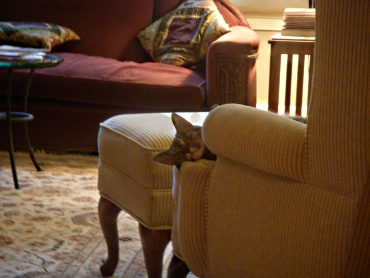 He even reverted to some odd behavior I haven't seen in more than a year when he dropped a mouse into his water bowl one day. There's no way to know what that's about. 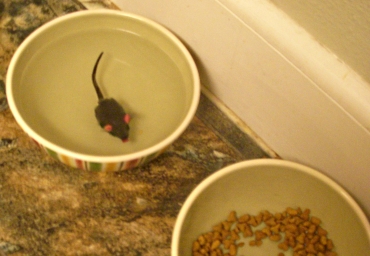 Unlike the first week Peter was here with Norma, there was glorious weather during his second stay. On the day we had lunch at Mio in Portland, we also spent some time at the Portland Japanese Garden. This stone lion is one of two that greeted us at the entrance. 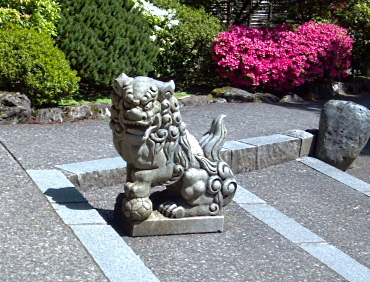 The garden is as beautiful as you would imagine. Although the wisteria wasn't ready yet, spring flowers and shrubs were in bloom. Peter and I both found a lot to photograph. 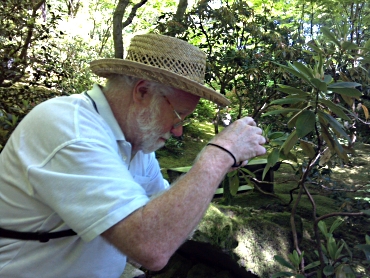 And this flat garden is, obviously, serene whatever the season of the year. 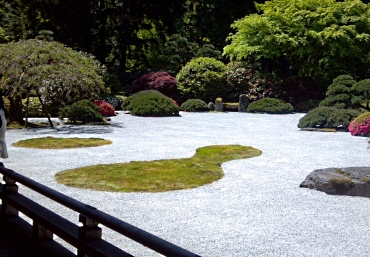 At home (when we were not eating), Peter educated me on Australian TV comedy shows, we both read a lot and aren't we all happy for modern communications that make it easy to keep up with email when we're away from home. 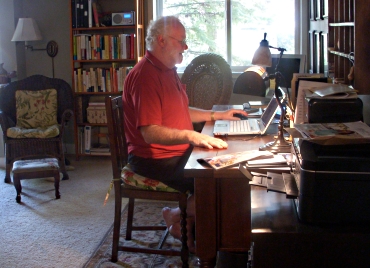 Peter is spending another couple of weeks with his sister in the San Francisco area before flying home to Melbourne. Last Sunday afternoon, I drove him to Union Station in Portland for the train trip south.

It's amazing the friends we make on the internet and I have to remind myself now that I can't just call Peter to invite him and Norma to dinner or suggest we meet at Mio or Kurata for lunch. It was hard to say goodbye and I sat in the car for a while until my eyes cleared up enough to drive. 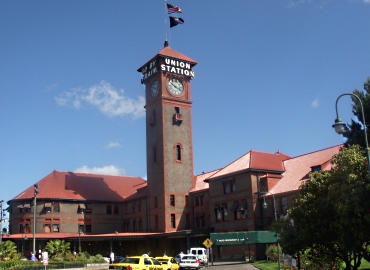 How wonderful for you & Peter & Norma to have spent this time together! Thanks for telling us all about it. Dee

I enjoyed your visit vicariously. Your sadness at seeing them go reminded me of something I became aware of almost as soon as I began to live totally alone: as much as I prefer living by myself, and find visitors tiring these days (though pleasant), it takes me far longer to adjust to their leaving than to their arriving.I seem to have to go through a brief period of mourning before I can get back to the equanimity I normally enjoy with just my own presence in the house.

A person can get pretty jaded from reading the daily news. And then this little story comes along.

Thanks for reminding us how beautiful is the simple human ability to connect with one another; how satisfying is the feeling of friendship; how fun it is to learn or experience something with another person.

Just magic stuff, indeed. I'm sitting here grinning like a kid. Thanks for sharing this special friendship with us all.

Did you ever explain that Norma is camera-shy? Or was there another reason she was not in any pictures in the previous visit's post?

By the way- I so enjoy your blog and pass it around to my friends & siblings quite often.

What wonderful memories you have of a pleasant visit with good friends. I am constantly amazed at how close I feel to my Internet buddies and how I would love an 'in-person' visit. I have had 3 of my 'net friends visit me, but not for overnight.

Peter sounds like a wonderful guy and fun to be with. I envy you having him and Norma as guests. Thanks for letting us share the fun.

Your home looks so cozy and inviting. Is it a coincidence how perfectly the light plays on your computer table? Your couches and chairs - all with cushions say "come, sit down and talk to me here".Your table with candles blazing and flowers in the middle -dine with me here. You set a very welcoming scene for Peter. It seems you are good friends. That is always a thing to be treasured.

Ollie looks huge! What does he weigh? I had lunch yesterday with three friends and the good feelings carry through for ages. It was so nice we've decided to do it every month.
The same group goes out for dinner and theater about every six weeks.
Book and writing talk, many shared interests.

All of the above, *and* the Portland Japanese Garden. I have a commercially-made one hour video, no commentary, just a slow walk and close observation of the PJG from spring through fall. I play it almost daily, as background in the evening when I'm alone. Visits with heart-friends are nurturing and Peter and Norma are obviously friends of that kind. Thank you for sharing their visit with us.

Thanks for sharing your photos and details of what looks and sounds to have been a very memorable visit with Peter and the elusive Norma. Meals and outings all look fantastic! And Ollie is charming.

I hope you can coax Peter to make that Salmon and black bean recipe available to your TGB readers. Looks great.

That looks like so much fun. There is nowhere like the Northwest when the weather cooperates. Visits with blogger friends have enriched my life, too.
Ollie is quite the beauty, but he apparently is not vain about it.

Peter is using the computer mouse left-handed?!?? He looks to be right-handed elsewhere. What gives? Is that photo reversed?

Sounds like a special time was had by all. Glad you could all have that time and experiences together.

Communication means today make crossing oceans and miles so easy that sustaining contact is simple -- even your dinners using Skype on a computer across the dining room table. Still, there's nothing quite like having the friends present, in person. So, when are you traveling to Australia?

Looks like a great time was had by all--including Ollie the cat. Love that cat!

I loved the story, and I am once again reminded at how much wonder we have awaiting us as long as we continue to be open to new experience.

Thanks for your writing, Ronnie.

Ronni, thanks for making my day with your beautiful story. It's great that you have OZ Peter as a friend and contributor. Mister Ollie is a riot.

SHerlock, I am right handed but use the mouse lefty. About 12 years ago I had a problem with my hand that lasted about 6 weeks. As I was still working I had to go lefty which was inially a trial. However, after the 6 weeks I could use the mouse equally proficiently in either hand. I kept to lefty as it was really handy as I could write, drink coffee and so on with the right.

It was indeed a huge pleasure to be able to visit Ronni and see a little of Portland. And to read all your comments - we are among e-friends.

That's a lovely tribute to the beauty of blogging buddies. I've had personal meetings with two mine so far and hope to have many more as time goes by.

How wonderful! Now where's that recipe?!?!?