The latest cover of the New Yorker magazine on newsstands today. Isn't this terrific: 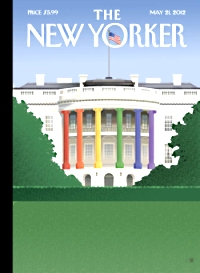 Compared to Congress and the judicial branch of government, a president has few actual powers. However, his position does imbue him with the authority to influence and, in time, even to change the course of the social zeitgeist.

Now the public conversation about full rights for gays and lesbians is altered.

Among the zillions of words spoken in response to the president's announcement were some important ones from our own Jan Adams at her blog in a post titled, BHO made me happy.

I should say something about the President having completed his 'evolution' to accept and endorse gay marriages (under state laws). The president made me happy. I'm surprised at how happy he made me...

“I'm glad he came out with this the day after North Carolina again voted my kind off the island. If it hasn't happened to you, you have no idea what it feels like to have your fellow citizens declare by popular vote that there is something so wrong with you that you shouldn't be allowed full rights. It stinks and it hurts.”

If you are straight and are having any trouble understanding that, imagine your life if you had been barred from marrying your wife or husband. Many gay and lesbian couples have lived decades in that second-class condition. Please go read the rest of Jan's post.

Equality for everyone should be such a simple thing to accept. The bigots will go down kicking and screaming, but they will go down.

I am happy for all of my gay friends and I am happy that my country is on the right side of history at long last. Or at least it is on the way to getting there. Good for Obama.

Let's start a grass roots campaign to change the descriptive adjective "straight" to something else. "Straight" implies proper, or "normal" (whatever the he;l that bloody word means). How about "hetro?" It's descriptive without any nuance of moral judgment.

As the parent of a gay citizen, I too am happy about this latest from Mr. Obama. On the other hand, I just wish that the politicians would stay out of this whole gay/lesbian issue. Their postures & rhetoric are offensive to me. And unlike many others, I do think this is just like this country's views on interracial marriage. BTW, why is it that just before elections & amidst the serious problems in our country, these power- hungry men always get back to gay/lesbian & abortion bandwagon? Cheeeeesh! Dee

Gay marriage? fine with me. I've got other things to worry about.

Hooray for President Obama for announcing what most of us already believed.

Sorry for shouting,but this is the best statement the President has made since he
took office.....

Thanks for the shout out! Yes, it's a great step forward. I'll be back to critiquing the President and administration soon enough. But it is great to have something to celebrate!

I was delighted to see this -- FINALLY!!!

Then again, it's never too late to do the right thing.

I was glad to see the President "come out" in support of gay marriage. Now let's watch the Republicans get all sanctimonious about how this will destroy the moral fiber of the country by undermining traditional marriage. Not sure how one follows the other, but they seem to think it does.

I wish I could introduce those who disapprove of gay marriage to some of the gay and lesbian couples I know. The bottom line is, they're just ordinary people trying to be happy. They earn their livings, pay taxes, raise their children. Why withhold their full citizenship rights?

It was not so long ago that it was against the law and the consitution of the State of Georgia that I could not marry another person of "discernable color" .... black, brown, or any other "color"!

That's what the Civil Rights Movement was about -- along with citizen's voting rights and many other rights that many of our citizens had been denied for centuries.

That's what I and many others fought so desperately for in the 1950s and 1960s ... and what we are continuing to fight for today!

I am, ocne again, very proud of Mr. Obama. He fights the good fight too!

That's the fight we're in today that every citizen, white or of any "discernable" color should joining us in right now -- loud and strong!!
Otherwise, our Democracy is doom in our lifetimes ... sighhh.

Sorry for the mis-spellings in my previous comment ... but I was a bit riled up when I wrote this one ;-)

Speaking as someone who has been divorced twice, I firmly believe that everyone should have the right to be unhappy.

But seriously, I was delighted to see the President's evolution on this issue. And while I don't think it will hurt him this November (people who are outraged about it are unlikely to have voted for him anyway), even if he does lose the election, he has already won the history books.

So it's an election year - but what a way to guarantee MY vote FOREVER!

Welcome to the future! I never did (and still don't) understand why the right wingnuts are convinced that gay marriage will somehow render "traditional" marriage null and void. I've been married to my husband for 33 years, and President Obama's announcement didn't change a thing for me, but it certainly did for thousands of my fellow citizens who happen to be gay and can now get married.

I wonder why marriage became the issue where gay rights are concerned. But I'm glad that Obama has finally spoken up.

I've been formulating the argument for gay marriage in this way: Equality takes nothing away from anyone. I am so pleased that progress has been made on this issue, although I realize that it will be many years before every state changes the legislation -- what a giant step forward!

Good for our President. Good for my nieces and their loves.

Shouldn't rights be exactly that?
Why on earth are "rights" being debated endlessly?
Isn't it everyone's right to have the same equal status as a citizen?
I am so baffled by the US.
XO
WWW

It's a start but it will take the full-throated efforts of this present youth generation to see that gay rights become fully comparable to traditional heterosexual ones.

I would be surprised (but delighted) to see an amendment to the Constitution allowing full equal rights for gays before 2030.

My husband and I were talking about this last night. We are so happy (proud, thrilled) he finally "came out", "stood up" for gay rights. We were telling my son that he couldn't do it in his first tour because he of re-election ... and now, in his second term he can address important, sensitive matters that would NOT get him re-elected. But really, are these the *important issues* we should be addressing? Talking about this and woman's right to choose, is going backwards! Yes, we are baffled too ... thank you, religious right for making all of these ridiculous issues, right up front, above global warming, education, economy...

In some states, like mine, the statutes address the involvement of ministers in marriage ceremonies, so it does get confusing. The states should issue a license, require that the signatures be notarized and the document gets properly recorded, and leave it at that. The statutes should make no mention of wedding ceremonies or ministers. Leave it to the individuals to arrange their own religious or non-religious ceremonies. Churches can continue, as they do now, to set whatever rules they wish about who they will perform ceremonies for, but the state says who is legally married.

I regret it has taken so long to affirm a given in equal rights, but finally. This is one more social issue some of the politicians will try to exploit for divisive purposes. Wish a friend was still living to have seen this happen though she and partner did their best to expose others to the normality of their relationship for several years.

In some states, like mine, the statutes address the involvement of ministers in marriage ceremonies, so it does get confusing. The states should issue a license, require that the signatures be notarized and the document gets properly recorded, and leave it at that. The statutes should make no mention of wedding ceremonies or ministers.