A SONG FOR SENIOR MOMENTS
On the telephone a few days ago, I laughed when a friend had difficulty recalling a name and said his proper name recall wasn't working. It's a funny idea that there would be one place in our brains for proper nouns and another for common ones.

We're not usually so specific about our memory slips. Darlene Costner sent this video of Golf Brooks singing Senior Moments with closed captioning if you need it.

CLICK AND CLACK RETIRING
Even I, with no interest in cars beyond getting me to my destination and not much more interest than that in NPR, enjoy listening to Click and Clack now and then. But they are soon to be no more. 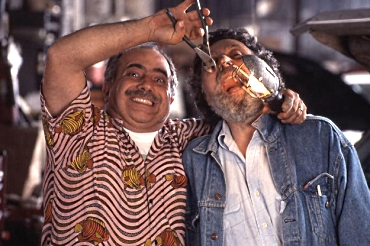 Come fall the Tappet Brothers, Tom and Ray Magliozzi – age 74 and 63 respectively - are retiring their radio show, Car Talk, after 35 years of weekly broadcasts. There is more information here and here.

AVERAGE FAMILY HAS LOST 38 PERCENT OF WEALTH
A new Federal Reserve study released this week shows that average family net worth plunged by a shocking 38 percent between 2007 to 2010 going from $126,400 to $77,300. Here's what it looks like on a graph:

The New York Times notes another statistic from the report:

”The average income of the wealthiest families fell much more sharply than the median, indicating that some of those at the very top of the ladder slipped down at least a few rungs.

SPEAKING OF THE TOP 10 PERCENT...
Last week, JPMorgan Chase CEO Jamie Dimon held a love fest in Congress with members of the Senate Banking Committee (did you expect anything else?).

For his latest program this weekend, Bill Moyers sat down for a few minutes with one of my favorite political journalists, Thomas Frank, the author of What's the Matter with Kansas? and more recently, Pity the Billionaire.

It's a short, little piece and worth every one of the three-plus minutes as the two men discuss Dimon and how the world works for the rich and powerful.

You might also be interested in reading this story, “Too Smart to Fail: Notes on an Age of Folly” by Thomas Frank in the latest edition of The Baffler, a magazine he founded and edits.

REPUBLICANS AND DEMOCRATS DISAGREE ON MORE THAN THE ECONOMY
We know the two U.S. political parties now seem to be living on different planets, maybe even solar systems, but who knew they also disagree on everyday purchases. According to a study from Buyology, Inc., which advises on marketing strategies, our political divide extends to brands.

Democrats like Starbucks; Republicans go to Dunkin' Donuts. Democrats watch Animal Planet; Republicans the History Channel. But they both use Visa to buy their Coca Cola.

Whatever. It's hard to know if this means anything. You can read reports on the study here and here.

KEVIN SPACEY IN THREE NEW FILMS
A year or so ago, Jameson Irish Whiskey teamed with actor Kevin Spacey and Trigger Street Productions for an international film competition with the idea of finding up-and-coming film talent.

I have no idea how successful it is as a marketing idea, but it is a great pleasure for you and me. According to Jameson, the three winners

“...were selected for their creativity and directing skills in portraying a legendary, humorous tall-tale.”

The three short films premiered on YouTube last week. Here is Ventriloquist starring Spacey and directed by Benjamin Leavitt from the U.S.

The two other films, both starring Spacey, are Spirit of a Denture from South African director, Alan Shelley and Envelope from Russian director, Alexsey Nuzhiny. You can see them at YouTube here and here.

GREGG ALLMAN WITH STEPHEN COLBERT
It's evident that some rock legends, in their old age, show effects of – oh, let's just say overindulgence in certain excesses through the years.

Others, Gregg Allman is among them, have strange ideas about how to promote their books – in this case, by not allowing the interviewer to talk about anything he wrote in the book.

Even with this handicap, Colbert managed a fine, funny interview. I've saved the best item today for last:

Another 5 ***** post. Thanks again. Enjoyed each one especially Darlene's contribution. :) Have a great w/end. Dee

Cis sent me the Golf Brooks vid Thurs and I posted it yesterday -- it's a hoot!!!

Loved the "Senior Moments" tune by Golf Brooks. Got me thinking about another tune dealing with seniors that John Prine wrote called Don't Be Ashamed of Your Age

Thanks for the Colbert bit. It really describes the culture of in-breeding between politicians and lobbyists beautifully.

Loved the comment about forgetting proper nouns. Someone I used to know said he and his wife now live in a "noun-free zone." I wonder why verbs and adjectives are so much more resilient.

For some reason Canadians are not "allowed" to view the Colbert Report.

Lots of good stuff and...

I just ran across this item on childofillusion.blogspot.com and immediately thought of you. I realize that this situation seems to be once of race rather than ageism, but the same thing could happen to the elderly. Would you mind reading this and posting your comments or perhaps doing a blog about it? I have no blog, but I am overwhelmed with the injustice of this incident and thought you would be, too. This was in an email from Barbara Santee. Just read it. Please.

I am retired, seventy-seven years old, have enjoyed continuous driving privileges of 'drivers license' since age sixteen, white, and therefore have had no previous reason to be familiar with the process of getting a 'State ID'. I was appalled today by circumstances to have learned how suppressing the process is and wonder if it may be due to political design to make it difficult for less fortunate of our citizens to obtain required identification to vote in this state.

It all stated about three weeks ago. A friend who had just moved from another state told me that an employer had promised to hire him for a better-paying job if he had an Oklahoma Drivers License. So, I furnished him a ride to Department of Public Safety to get the license. I recall wondering at the time how difficult and time-consuming it would have been to get to DPS by himself without a vehicle or bus service. Nevertheless, once there and after presenting his official home state identification card, he was told Oklahoma does not recognize his North Carolina ID and that he would need an official Oklahoma Identification Card instead. He was told that to obtain such Oklahoma ID he would need his Social Security card (which had been lost with his wallet).

The next destination therefore was to the Social Security office and a long wait get a copy of his card. Instead, that office furnished him an officially stamped letter and told him that it should serve for all purposes until he received his card in the mail in about ten days. So back to the Department of Public Safety with it we went.

But once there, DPS would not accept the officially stamped Social Security office letter and my friend was told that he would have to have the actual card instead as well as a certified copy of his birth certificate.

I do not hesitate to admit that I was already beginning to become somewhat embarrassed with my home state in witnessing how my black friend was being given the 'run-around' treatment. Plus, I had not only already expended quite a lot of my own time but also my own gasoline money during the ridiculous process. But, that was not the least.

After spending an additional eighty of my own dollars to fund an expedited request to North Carolina Vital Statistics, receive his certified Birth Certificate by Fedex, and return with it to DPS, my friend was told by DPS that it was still not enough and recommenced the circular process all over again by refusing again to accept the only picture ID he has (his official North Carolina ID), i.e., to obtain an Oklahoma ID one must possess another Picture ID (such as one from another state) which Oklahoma will not accept.

If anyone can make sense of this process please let me know. But after having personally experienced being allowed to vote only by Provisional Ballot just last year at the same polling place where I have voted for the previous twenty-two years, I must continue to believe that is is designed simply to prevent minorities from voting in the state of Oklahoma. I don't really want to believe that mine is the same country that I and others have fought and risked our lives for still wants to suppress its citizens.

Potential 'terrorists'; non-existent 'voter fraud': subterfuge, not reasons. "Those who desire to give up freedom in order to gain security will not have, nor do they deserve, either one." I DO NOT WANT TO BELIEVE IT…PLEASE TELL ME IT ISN'T SO !

Class of 65: I believe that the proposed voter ID laws will have quite a disproportionate effect on both seniors and the poor, particularly due to the issue of transportation. I would strongly urge you to publicize your experience to the Democratic parties in the states which are considering such laws. My state, Minnesota, has a proposed constitutional amendment on the ballot in November. With your permission, I would love to be able to forward your comment above to the folks who are fighting this amendment. We have many seniors who do not drive, were born at home, and some without social security cards (they never worked and collect from the benefits of a deceased spouse). These are blatant poll taxes designed to limit access to the ballot box but wrapped in the "logic" that we need to prove our eligibility to exercise our inalienable right to vote.
My blog Just My Life is listed in the elderblogger list. Please contact me through that site if your are interested.