DID AMELIA EARHART SURVIVE
As with Judge Crater and Jimmy Hoffa, the mystery of the disappearance of Amelia Earhart remains after many decades. There have been tantalizing clues that she survived for a time. You can read about the latest one here or watch this video:

TRANSIT OF VENUS
It happened last week and hardly anyone alive today will be here to see its next appearance. The Transit of Venus across the sun occurs in pairs eight years apart, each pair separated by 105 or 121 years. The next one will occurr in 2117.

FAILURE AND RESCUE
Anyone who has been reading Time Goes By for a few years probably knows of my admiration for Atul Gawande, surgeon, Harvard professor, author and New Yorker contributor.

He is also the director of the World Health Organization’s global campaign to reduce surgical deaths and complications, an important credential for you to know in regard to the commencement speech he gave at Williams College last Sunday titled Failure and Rescue:

”Some [hospitals] still have far higher death rates than others. And an interesting line of research has opened up asking why.

“Researchers at the University of Michigan discovered the answer recently, and it has a twist I didn’t expect. I thought that the best places simply did a better job at controlling and minimizing risks—that they did a better job of preventing things from going wrong. But, to my surprise, they didn’t.

“Their complication rates after surgery were almost the same as others. Instead, what they proved to be really great at was rescuing people when they had a complication, preventing failures from becoming a catastrophe.”

And if you think that doesn't have anything to do with life in general, go read the whole thing.

BABY WOOD DUCKS
Never heard of wood ducks before TGB reader Cathy Johnson sent this video. And I certainly never knew that mama duck makes them jump out of a high-perched nest when they are only one day old. Or that baby ducks bounce. Take a look:

There are more videos and still shots here.

HIP-HOP TALENT WINNER AT EDEN CONFERENCE
The Eden Alternative, founded by Dr. William H. Thomas in 1991, is a movement that is changing long-term care. As they state on the website:

”They are dedicated to eliminating the plagues of loneliness, helplessness, and boredom that make life intolerable in most of today’s long-term care facilities.”

There are more than 300 registered Eden Alternative homes in the U.S., Canada, Europe and Australia. Last week, the organization held its annual conference in Grand Rapids, Michigan last week.

Among the panel discussions, exhibits and educational opportunities was a talent show. And here is the “undisputed crowd favorite” [and winner], local college freshman Deavondre Jones:

PRESIDENTIAL EXCUSE NOTE
Last Monday, President Barack Obama was speaking at a Honeywell factory in Minnesota. Employee Ryan Sullivan was selected to introduce the president and thought it was well worth it for his fifth-grade son, Tyler, to miss school to meet a sitting president.

I agree and Tyler got the best excuse note any kid could have: 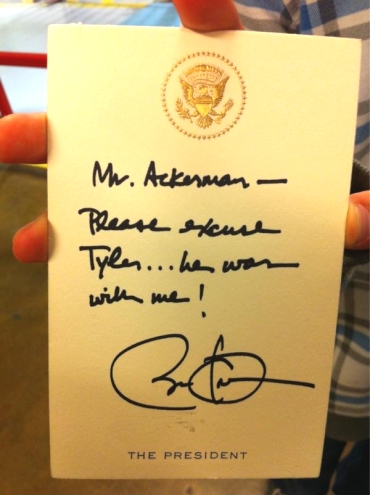 CARLIN ON HOW THE ECONOMY WORKS
Even though George Carlin died four years ago, his riffs are as relevant and spot on now as when he first created them. I guess that means the people of the U.S. have learned nothing. God, I miss him. Wouldn't you love to hear what he would have to say about Citizens United?

I continue to be amazed about the quality of these Saturday Morning Posts. You seem to stretch from really good to fine to excellent to amazing to fantastic to incredible to mind-blowing to unimaginable to transcendental --- on a regular basis. We cannot ever have done enough of anything to deserve this limitless generosity of yours, Ronni.

I liked all of the interesting things today, but was especially taken by the baby Wood Ducks. Amazing!

Thank you for posting the Transit of Venus video. I had intended to watch it but forgot. (I do that often now.) I even put it on my calendar, but that doesn't do much good if you don't look at the calendar so I appreciate the chance to see it.

I have seen the Carlin clip before as well as the one on Emilia Earhart. Like you, Ronni, I do miss George Carlin so much.

I agree with Steve. TGB is always something to look forward to, but this was a particularly fine example of Interesting Stuff. Thanks, Ronni.

Ronni, the video of the Wood Ducks is probably where my favorite saying "you're a lucky duck" comes from :)And BTW, that mother duck is amazing to have laid all those eggs! Thanks for a great start to the w/end. Dee

What wonderful assortment of info you have given us today!!!

Saturdays are always a delight here but today really touched me.

And yeah, George was the best and surprisingly prophetic.

I think every voter should be required to watch this segment of George Carlin's wit and rancor just prior to voting! He was always right and those of us who were hippies always recognized the truth in what he said.

I clicked on the link and read all of Dr. Gawande's commencement speech. Totally worth it!

Doesn't it sound like
George Carlin just made this video last week? Amazing. It should be shown in a joint session of congress......no matter how coarse, they should be made to listen to him. Dee

...I think I'll just send a link to the whole post. That was great Ronni.

I couldn't agree more about Atul Gawande writings and highly recommend people read his books, which I think you've previously featured and I have, too.

I once raised ring-neck doves, and was always amazed at how the mama would SHOVE the baby doves out of their nest, while daddy bird would rally round them and continue to feed them. It was as if the mama had done her part, breeding, but daddy bird felt obligated to keep taking care of the little ones. SO very different to human mama/daddy behavior.

George Carlin is desperately missed. When I read the comments on many political blogs and FB political posts it's clear that critical thinking is a subject phased out of school about 30-35 years ago. But what astounds me even more is the disconnect between espousing a set of "religious" values and employing them. "Thou shall not bear false witness" doesn't apply if bearing false witness advances your political agenda. I'm not speaking on a national level, I'm speaking on a personal level, to conversations with a brother who was devoutly and consistently Christian all his life, but felt no compunction about lying to promote his ultra-right political viewpoints. Very very strange.