How nice to hear from so many of you that I'm not alone in falling off the deep end slothdom by spending nearly every waking hour in a #$%^&* television series.

Unlike some (yes, even some likable people who comment here), I don't disdain television. I have a low boredom threshold but that still leaves more excellent programming on the tube than you might think.

On the other hand, there are so many other good ways to spend one's time that I miss a lot of the best stuff – as my current Damages marathon attests.

This obsession continued Sunday night and is still going on Monday. Early in the day, in an effort to leave a little something here for you, I put together this picture show.

It came about a few days ago during an email exchange with a New York City friend, Annie Gottlieb, whom you can find at Facebook and at Ambiance where she blogs with a bunch of friends.

Annie lives in Greenwich Village a few blocks from where my home was and she keeps me up to date on what's happening in the neighborhood. I mentioned to her that I've somehow made my new home on the left coast into a bit of a shrine to the city I miss so much.

Perhaps it is beginning to get out of hand, but as I told Annie, I'm old now and I'll do what I want. 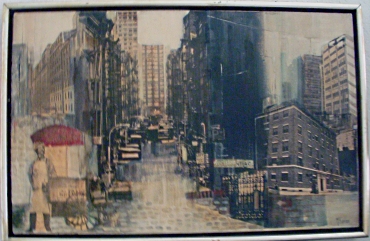 This is a collage by Marilyn Kaplan that I bought at the spring Greenwich Village Art Fair in 1972. This is a poor photo of it, but in person it captures the feel of the city for me – at least, how it felt then, 40 years ago. 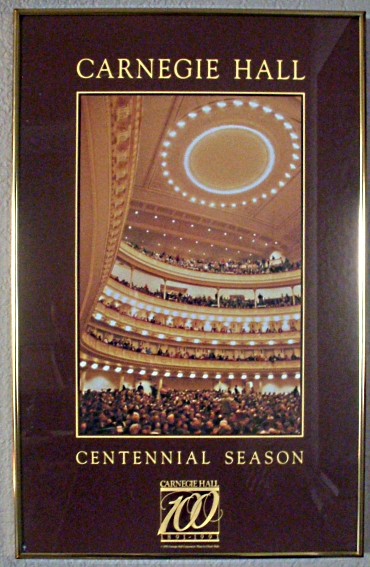 In 1991, Carnegie Hall celebrated its hundredth anniversary and I spent a couple of months working on the production of the day-long PBS television show to celebrate the event. They actually paid me money to spend a whole lot of time in preparation for the show learning details of the history of the Hall, its architecture, the musicians and artists who played there and all the stories that go with that.

This is the poster from the celebration and you can find out more about it here.

In this photo, you get three for one: 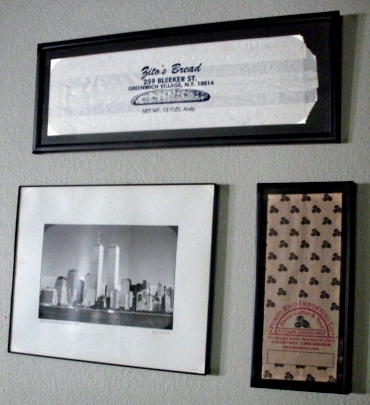 Zito's had been turning out the best Italian bread in New York City for more than 80 years. You could find it in the best restaurants but it was also my neighborhood baker. Then, around 2003 or 2004 or so, while I was still living in New York, it suddenly closed after the landlord quadrupled the rent.

On the last sale day, I bought half a dozen loafs to freeze for myself and had one of the paper bags framed. I'm still looking for bread that good.

The brown bag on the lower right of the photograph is from Porto Rico coffee company in the Village. Its been there on Bleecker Street since 1907 and I've been buying my coffee there since – oh, at least 1980. I still do.

I have it shipped to me every few weeks. It's the blend it took me years to settle on, so I'm not going through that experimentation again and even with shipping charges, it costs less than the best local brands. It is also a full pound of coffee; everyone else these days charges more for 14 and even 12 ounces sometimes.

A friend brought me the photo of the twin towers on 12 September 2011. He purchased it from a street vender on his walk to my place and it's not the best likeness of the two buildings I've ever seen but it's still a worthy reminder and besides, it is a gift. 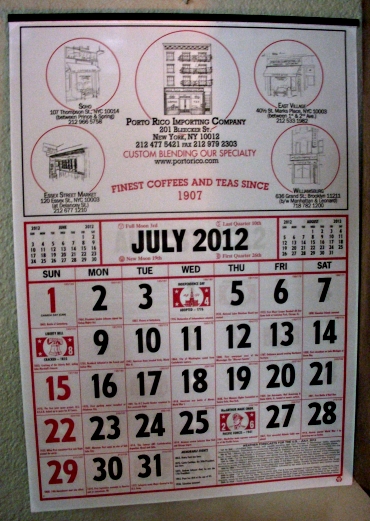 Speaking of Porto Rico coffee, this is the calendar that arrives with my first order after January 1 each year. It's big, easy to see and one of those terrific, old-fashioned calendars with mentions of all sorts of obscure occurrences on every day of the year. And, of course, it also reminds me of home. 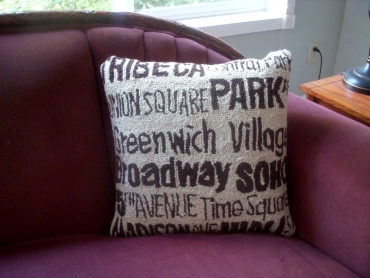 This is the most recent addition to the shrine – sent by a friend. You can see that it is embroidered with the names of Manhattan locations. It's not the most comfortable pillow I've ever owned but I like seeing all those names.

And now, having knocked off this post in under an hour, I'm off to walk to the grocery (all the exercise I'm going to get today) for a couple of needed items and then – more Damages here I come.

Sweet. Did Marilyn Kaplan attend Music and Art? I remember a student by that name. Those years, Carnegie Hall was where our graduations were held. So your photos and memories are dear to me.

I think it's great to make a home personal to a person's loves. I certainly do that with mine only it's not a place I have lived, but many places across the west that I dearly love to be whenever I can, memories of trips, of experiences, of the energy of those places. That's what I think decor should be-- creating our own vibrant energy for our dwelling

We love ya no matter to what. :) Maybe once a month you could venture out and discover something new about your new city too.

I've never been to NYC but apparently to many people it is a magical place. The only bad part about your post is that it makes me think about the sadness you feel because you had to leave your beloved city.

Which causes me to ponder the general subject of regrets. That would make a good column: regrets.

My son played in Carnegie Hall many years ago and it was unfortunate for me that I was changing planes to go to Spain at JFK that very day. It was very disappointing to be so near and yet so far. I have never been to Carnegie Hall so I appreciated the poster.

I don’t think one ever falls out of love with NY. I certainly have not.

I always enjoy your sharing of memories there. Thanks.

Ronni, will you share which of Porto Rico blends you prefer? I like heavy, full-bodied coffee and they list some that might be to my liking. I order coffee from Peet's but it has become so expensive per pound (not a full pound anymore) and for shipping that I am looking for an alternate source.
I have no roasters locally so have to do mail order.

What a great idea to save items like these from places that may not exist or you may see no longer and to display them. The calendar from the coffee purveyor is a work of art itself. I do think it;s rather ironic that you are living in what is believed to be the coffee mecca of the country and you order from the east coast. Good for you.

I enjoyed this particular column, as well. I live in Seattle, but was just in Portland for my annual visit last week. I had my first cup of Stumptown coffee and fell in love with it. Also ate at Tasty n Sons this visit - and, oh my - finest food I've had in ages, especially their $1.50 chocolate potato doughnut with creme anglaise sauce. Reasonably priced, too. I agree with you - it is a treat to be able to watch a TV series in mostly one fell swoop. Did that with HBO's The Wire and Downton Abbey - two of the finest series I've come across.
So glad you are immersed in Damages.
By the way - I love Portland and think you live in the finest city I've ever visited. Enjoy the sunshine!

I loved this post. Few people frame a bread sack. I love that you did. I also love the framed brown bag of your favorite coffee. It is the little things in life that bring such pleasure.

Well, I think that one of the few perks of growing old is doing eactly what you want to--if it's watching 14 days in a row of an interesting program, isn't it neat to be able to do that? I agree that there are many wonderful programs on TV. I am as intellectual as the best of them, but disdaining TV because "reading engages your mind more" is nuts--and false. I guess I'll have to see an episode of Damages (one more obsession to make time for).

I would never have thought of framing a bread sack. What a great idea! Nice post too.

We, too, have framed memorabilia in our home--nothing quite as enchanting as your bread sack and coffee bag, but reminders nevertheless; two from your neighbor state to the north, one from SC, both places far from the cornfields of northern IN and both very dear to my heart. Wouldn't trade these for fancier or pricier pieces of "art."

Gotta get a load of laundry started (doing a little of that will be my something constructive today); and then I can continue to read blog posts, make comments, and start reading the latest book waiting on my stack . . . I'll get to the vacuuming soon.....maybe. :)

Judy...
About 30 years ago, after several years of trying all kinds of self-created blends at Porto Rico, I settled on what was then a new house blend, Auggie's.

If you want to try it, be careful as they also have an Aggie's blend.

Of course, the flavor of coffee, something many drink every day of our lives, is a personal choice and one person's flavor doesn't do much for another person.

Somehow, in 30 years I've never tired of Auggie's. I order five or six pounds at a time when it's on sale (I get weekly sale emails from Porto Rico). As I mentioned, even with shipping, it's less per full pound than what Peet's and other well-known local and national brands charge here for 12 or 14 ounces.