This topic came up one evening after copious wine was drunk when Ronni, the Web Mistress, mentioned Mairzy Doats and soon after, Bibbidy Bobbity Boo. It was that sort of night.

The Web Mistress, Norma, the Assistant Musicologist, and I quickly came up with another half dozen nonsense songs, or songs with nonsense lyrics. We wondered if we could fill a column. Of course we could.

Indeed, there are several contenders that didn’t make the cut. In a Gadda Da Vida was mentioned but I couldn’t cope with 17 minutes of the most dreary “heavy” guitar and interminable drum solo, so it got the flick. As did Zip-A-Dee-Doo-Dah as I already had my quota before I got around to including it.

I considered Mel Tormé and/or Ella Fitzgerald performing scat singing but that didn’t really fit in with the others, so they’re out as well. The Beatles’ Ob-La-Di, Ob-La-Dah was originally included but was dropped for something better (better in the sense we’re talking about today).

Quite a number of the tracks were big sellers. I don’t know what that says about music buyers and I’m not going to pursue that further. So, in the spirit of that evening, here are some really silly songs or more to the point, songs with nonsense lyrics.

We’ll start as we did on that night with Mairzy Doats performed by the MERRY MACS. 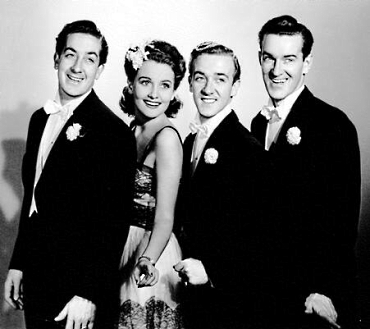 The song was written by Milton Drake, Al Hoffman and Jerry Livingston. It had several versions that made the charts before this one actually made it to number 1 in 1944. There have been a bunch of versions since then as well.

The Merry Macs were Judd, Joe and Ted McMichael and Mary Lou Cook. There have been other female singers but this is the most famous personnel for the group. However, Marjory Garland was the singer when this song was recorded.

A song that sends up this whole genre, as if it could be sent up, is Who Put the Bomp by BARRY MANN. 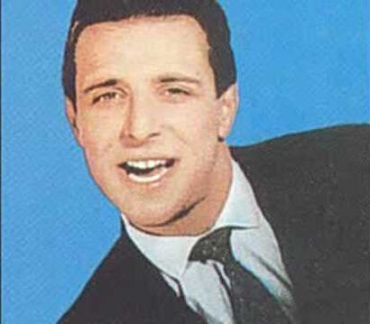 Barry was mostly known as a songwriter particularly in partnership with his wife, Cynthia Weil. These two wrote scads of songs for artists in the fifties and sixties (and later), but the earlier ones are those you’d probably recognize.

They also wrote songs and themes for TV and films. Here is (I believe) the only record Barry recorded. It’s certainly the only one that made an impact on my ears.

♫ Barry Mann - Who Put the Bomp

PERRY COMO was the son of Italian immigrants. His father was a singer of some skill and organized music lessons for his kids, of whom there were many, even when he could barely afford this luxury. 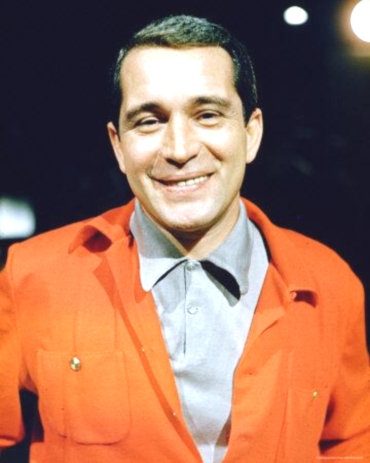 Perry learnt the organ, guitar, trombone and other instruments. He didn’t have any vocal lessons. Well, he really didn’t need them, did he?

Perry could have been included today for several songs. Maybe he had a penchant for silly lyrics. I’ve saved him for Hot Diggity (Dog Ziggity Boom).

The next song has already been mentioned by Barry Mann in his contribution. Here you have the opportunity of listening to the original. I give you Rama Lama Ding Dong by THE EDSELS. 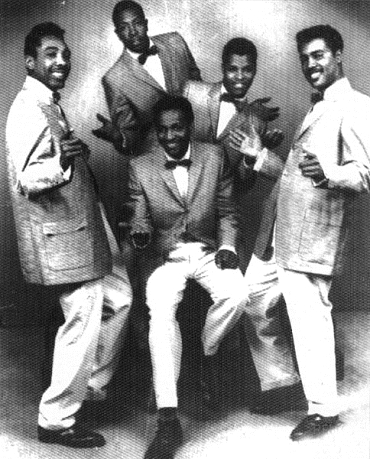 The Edsels were originally named The Essos, after the oil company. When Ford brought out their new car model they changed their name. They obviously had no idea what a clunker that would turn out to be.

They recorded today’s song in 1957, and it sank without a trace. Well, not quite because in 1961 a disk jockey in New York started playing it in high rotation and this revived the song and it became a (bit of a) hit.

Even when LITTLE RICHARD sang real words in his songs, it was difficult to understand what they were. It didn’t matter, and it still doesn’t - this is rock & roll at its best. 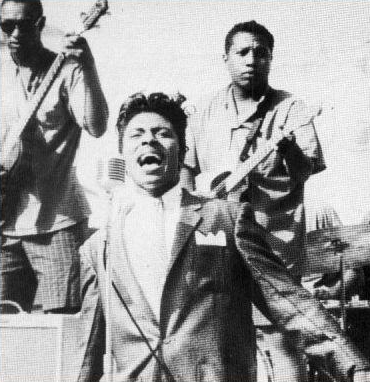 This is undoubtedly the most famous song from the fifties with nonsense lyrics. It’s so famous, it’s such an icon of rock & roll, that its first line has been used as the title of at least one book, numerous magazine articles and who knows what else. The song is Tutti Frutti. Okay everyone, “A whop bop” (etc).

Bibbidi-Bobbidi-Boo came from the Disney film of Cinderella and really should have remained there. However, it got loose and inflicted itself upon our poor unsuspecting ears. The version I remember from when I was knee high to a wombat was by JO STAFFORD and GORDON MACRAE, although possibly not at the time of its release. 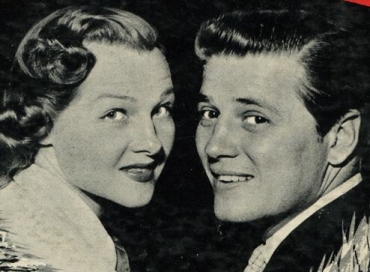 There were other versions around the same time – Perry Como, The Fontane Sisters, Ilene Woods and others. I don’t know what they were thinking of. Here it is.

Having well and truly trashed the previous song, you’d think that I should do the same for the next one. However, I can’t – it always brings a smile to my face. Maybe it’s because my initial musical education was from the fifties not the forties. So, we have THE RIVINGTONS. 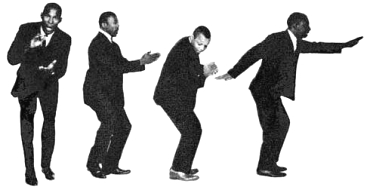 The Rivingtons had a couple of hits in the early sixties, Poppa Oom Mow Mow and The Bird’s the Word. A group called The Trashmen released a single called Surfer Bird which was really an amalgamation of both those songs.

I don’t know if legal problems ensued as they didn’t credit The Rivingtons but today we’re interested in Poppa Oom Mow Mow.

DAVID SEVILLE had hits both under that name and his birth name, Ross Bagdasarian. 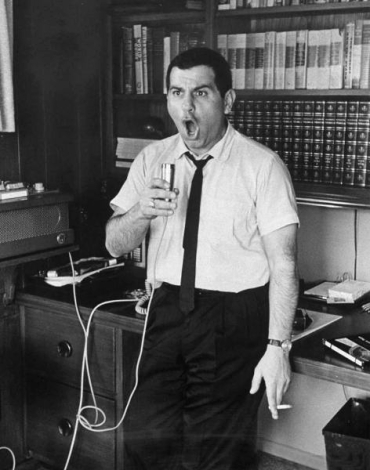 He’s the one who was responsible for all those Alvin and the Chipmunks records (and I guess, TV programs, but I’m not familiar with those, thank goodness). He was also a minor actor who appeared in several Alfred Hitchcock films and quite a few others as well.

He bought himself a variable speed tape recorder (rather unusual for the time) and a recording career was born - initially with Witch Doctor and then those damn chipmunks.

JAN AND DEAN were Jan Berry and Dean Torrence. 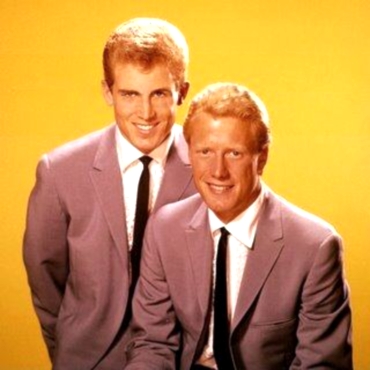 Jan was the songwriter, producer and arranger of their music and it was their music and his production that inspired Brian Wilson to do the same thing for the Beach Boys. Indeed, Brian and Jan collaborated on many songs for both groups.

In a case of life imitating art, Jan was severely injured in a car accident very close to Dead Man’s Curve, the title of one of their biggest hits. Despite severe brain damage and partial paralysis, he persisted and they eventually continued as a duo, if in a rather sporadic manner. Dean was also a successful commercial artist. Here’s their contribution to today’s nonsense, Baby Talk.

The final song doesn’t actually have any nonsense lyrics; they are all perfectly clear to every Australian who listens to it. I’ve included it as I suspect that those not from this country – most of our readers and listeners – might think otherwise.

The song is I’ve Been Everywhere which was a huge hit for LUCKY STARR in the early sixties. 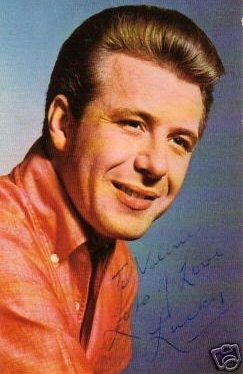 The song was written by Geoff Mack in the fifties. Geoff was staying in a motel at the time and he only had a map of three Australian states – Victoria, New South Wales and Queensland – and he used this to write the song. The other states missed out.

Since this original, there have been versions about other countries. Hank Snow and Johnny Cash amongst others, have performed an American one. They don’t achieve the speed of Lucky’s performance and they lack the tongue twisting place names.

This wasn’t a recording studio trick either, I've seen him perform it live, word perfectly (and just as fast).

If you’re unable to understand what he’s singing, here are the places mentioned:

Oops, I forgot Oodnadatta, mentioned in the "prologue" of I've Been Everywhere.

Down memory lane. Enjoyed the songs I remember so long ago in a strange long trip far far away. Thanks for sharing them again.

How could you forget Kay Kyser's classic...

"Down by the Meadow in an itty bitty poo'
Lived fee little fiddies and a Mama fiddy,too
Fin said the mama Fiddy, Fin if you can
And they fam and they fam all over the dam.

Funny, I can't remember whether my telephone bill was paid yesterday,but I can remember this song from 1939...

Oh, those old songs! Here I am in my 70s and they still go thru my brain sometimes. How about "RagMop" (by the Mills Brothers, I think). Or the "Hut-Sut Song" (supposedly Swedish, which was soundly laughed at by my Swedish grandmother). Thanks for the memory lane trip.

We really had a good time with this!! We sadly remembered all these songs and then fondly recalled painting "Rama Lama Ding Dong" on an old bike. We were so cool. Why is it we remember the words to these crazy non-sence songs and can't remember words to more more modern songs? Fun day, Peter! Now we will forward this to our friend Doug who, we know will also get a belly laugh out of this post.

Thanks for the grins.

I can't begin to tell you how many times I sang "Mairzy Doats" and "3 Itty Fiddies" to my granddaughters and we all loved them. They were popular because the lyrics were easy to remember and fun to sing. The "Hut Sut" song was also fun to sing.

How about "Throw Mama From The Train a Kiss'?

I am not going to win any popularity contests when I say that the silliest songs of my youth were better musically than some of the junk turned out today. Today's music (?) is just a beat with bad grammer (ain't is uses a lot) and no melody. The lyrics are usually senseless.

Call me a crabby old lady.

I had never heard "I've Been Everywhere" and I will admit that no one except Lucky Starr could sing those lyrics.

Loved this, thanks! I reposted your article to my Facebook page. Might you do a Part Two with the suggestions made here, and then some?

A few errors of pronunciation by Lucky Starr, (e.g. he says 'Wongaratta' instead of 'Wangaratta') but even at half speed I don't think many people would even dare to tackle that silly song. I certainly wouldn't!

Yes, I picked that up too, but I was born and bred in Victoria, unlike Lucky.

Yeah, these fall under the category of novelty tunes that every generation seems to conjure. I think of The Chipmunks. Then for bizarre we have all those vocal groups who sing in falsetto voice right up to today's "Jersey Boys" that some people seem to go ga-ga over.