Following on yesterday's post about regret, this came to mind - definitely related. The poem is often misquoted as “the road less traveled” from the penultimate line. Those phrases mean two different things.

Two roads diverged in a yellow wood,
And sorry I could not travel both
And be one traveler, long I stood
And looked down one as far as I could
To where it bent in the undergrowth;

Then took the other, as just as fair,
And having perhaps the better claim
Because it was grassy and wanted wear,
Though as for that the passing there
Had worn them really about the same,

And both that morning equally lay
In leaves no step had trodden black.
Oh, I marked the first for another day!
Yet knowing how way leads on to way
I doubted if I should ever come back.

I shall be telling this with a sigh
Somewhere ages and ages hence:
Two roads diverged in a wood, and I,
I took the one less traveled by,
And that has made all the difference. 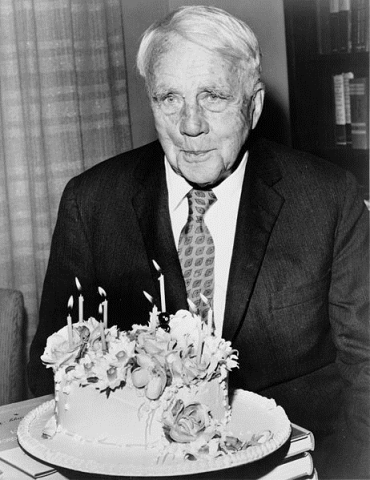 Can there be an American who does not know of Robert Frost? Winner of four Pulitzer Prizes among numerous other awards, poet laureate of the U.S. and, of course, the story of his new poem, The Preface left undelivered at the presidential inauguration of John F. Kennedy in January 1961.

Frost had written The Preface for the occasion to be followed by his recitation of another of his poems but glare from the snow was so bright he couldn't see the paper on which the new poem was written. So he recited from memory the other one, The Gift Outright, and The Preface was never heard. You can read it here.

Frost was born in San Francisco in 1874. He lived and taught for most of his adult life at colleges in Massachusetts and Vermont while turning out a body of work known for its plain-spoken celebration of rural, New England life, of both the wonder and harshness of nature with not infrequent pessimistic undertones.

I like that he once said, "I would have written of me on my stone: I had a lover's quarrel with the world." He died in Boston in 1963.

Here is Robert Frost's own reading of The Road Not Taken.

At The Elder Storytelling Place today, Nancy Leitz: Uncle Arthur to the Rescue

Frost is an American treasure.

I first heard Robert Frost's reading in 1955. And have never forgotten it.

"And that has made all the difference."

The poem is a perfect addition to yesterday's post.

I think "the road not taken" is a common lament from elders.

Thanks for reminding me of this wonderful poet. I am going right now to try and find my books of his poetry to read again...and I am smiling.

One of my all-time favorites and one that I often ponder.

I had the good fortune to take a summer class in writing memmoir,taught by Professor Lesley Francis,who is the granddaughter of Robert Frost. It was exiting to hear her talk about her mother growing up in the Frost family. It was an unusual family, to say the least. It was great to have an up-close and personal view from the stories she shared with us.

Thank you, Ronni, for putting before me one of my all-time favorites. It's been too long since I last read it.

I'm back to say thank you again. I followed your link to The Preface and learned that it was Frost who wrote, "home is the place where, when you have to go there, they have to take you in." As often as I've said that, I'd not known till now that it was from Frost.

I'm not sure that my thoughts of the "other road" are a lament, but instead are more plain old curiosity. "What would things be like if...." I don't regret having taken the road I am on now, but it might be interesting just to have a peek at what would I would have found around the curve of the other road.