I think that, from a biological standpoint, human life almost reads like a poem. It has its own rhythm and beat, its internal cycles of growth and decay.

It begins with innocent childhood, followed by awkward adolescence trying awkwardly to adapt itself to mature society, with its young passions and follies, its ideals and ambitions; then it reaches a manhood of intense activities, profiting from experience and learning more about society and human nature; at middle age, there is a light easing of tension, a mellowing of character like the ripening of fruit or the mellowing of good wine, and then gradual acquiring of a more tolerant, more cynical and at the same time a kindlier view of life; then in the sunset of our life, the endocrine glands decrease their activity, and if we have a true philosophy of old age and have ordered our life pattern according ot it, it is for us the age of peace and security and leisure and contentment; finally, life flickers out and one goes into eternal sleep, never to wake again.

One should be able to sense the beauty of this rhythm of life, to appreciate, as we do in grand symphonies, its main theme, its strains of conflict and the final resolution.

The movements of these cycles are very much the same in normal life, but the music must be provided by the individual himself. In some souls, the discordant note becomes harsher and harsher and finally overwhelms or submerges the main melody.

Sometimes the discordant note gains so much power that the music can no longer go on, and the individual shoots himself with a pistol or jumps into a river. But that is because his original leit-motif has been hopelessly over-shadowed through the lack of good self-education.

Otherwise the normal human life runs to its normal end in a kind of dignified movement and procession. There are sometimes in many of us too many staccatos or impetuosos, and because the tempo is wrong, the music is not pleasing to the ear; we might have more of the grand rhythm and majestic tempo of the Ganges, flowing slowly and eternally into the sea.

No one can say that a life with childhood, manhood and old age is not a beautiful arrangement; the day has its morning, noon and sunset, and the year has its seasons, and it is good according to its own season.

And if we take this biological view of life and try to live according to the seasons, no one but a conceited fool or impossible idealist can deny that human life can be lived like a poem. 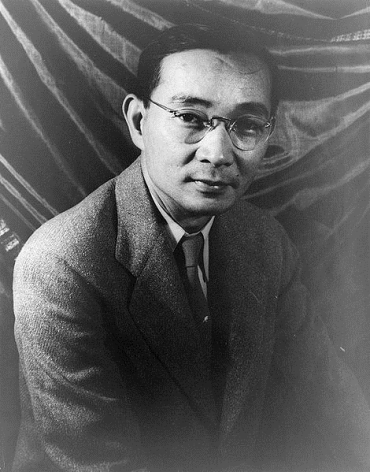 Lin Yutang was a scholar, translator, poet, novelist, historian and philosopher who, born in China to a Chinese Presbyterian minister, was educated at Harvard and other centers of higher learning in Europe. He became a prolific, best-selling and beloved author in the U.S. during the mid-20th century.

Today's post is excerpted from his classic book of thoughts on the joys, contentments and the significance of life titled, The Importance of Living which was published in 1937.

Lin Yutang was widely quoted during his life – he died in 1976 at age 80 - and still is. One of my favorites which is especially pertinent in today's over-scheduled world is this: “The busy man is never wise and the wise man is never busy."

Amazing! I wrote an abstract on Lin Yutang in the 60s.

This is just wonderful. I like the symphony analogy. It is comforting to look back and realize my life is a poem set to music. I am in the final resolution. Have I made sweet music along the way? I will have to think about that.

In today's chaotic world what with fighting going on all over the world, shootings in unexpected places, and the worry of the elections hanging over our heads, today's post was just what I needed to slow down my mind and give it a rest. Thanks so much and I will look for his book to read.

All of us have been influenced by this man's words.

Thank you for posting this. We need to be reminded of the truth in his wisdom.

What a wise point of view- thank you!

I am puzzled about how infrequently people write about the transformational possibilities of aging. This article suggest a deeper theme but doesn't get very personal. Aging is about giving up who you used to be and discovering a number of amazing surprises about yourself and life. Why don't we talk more about personal and spiritual growth in the aging process?