ELDER PROSE: The Old Grandfather and the Grandson

Considering the terrible instances of elder abuse we discussed here earlier in the week, this story from the Brothers Grimm is an antidote.

By Jacob and Wilhelm Grimm

There was once a very old man whose eyes had grown dim, his ears deaf, and whose knees shook. When he sat at the table hardly able to hold his spoon, he'd spill soup on the tablecloth and a little would even run out of his mouth.

This disgusted his son and his daughter-in-law and so finally the old grandfather had to sit in a corner behind the stove. They have him his food in an eathenware bowl and not even enough at that. He used to look sadly toward the table and tears would come to his eyes.

One day his trembling hands couldn't even hold the bowl and it fell to the floor and broke to pieces. The young woman scolded but he said nothing and merely sighed. For a few farthings she then bought him a wooden bowl and he had to eat out of that.

As they were sitting thus, his little four-year-old grandson was fitting some little boards together on the floor. “What are you doing there?” asked his father.

“I'm making a trough for father and mother to eat out of when I'm grown up,” answered the child.

The husband and wife looked at one another for awhile, finally began to weep and at once brought the old grandfather to the table. From then, they always let him eat with them and they didn't say anything even when he did spill a little. 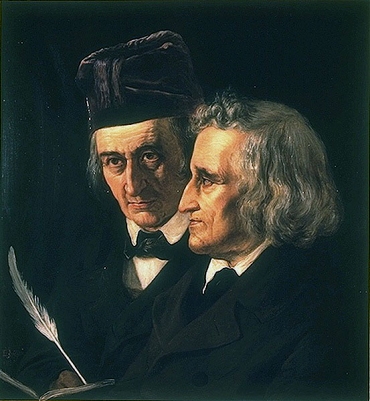 The Brothers Grimm were born in Germany – Jacob in 1785, Wilhelm in 1786. They grew up to work together as linguists, cultural researchers and collectors of legends and folk stories they published in several books throughout their lives.

When I was a kid, my book of Grimm's Fairy Tales was among my favorites, read again and again over many years (and now, occasionally, too).

Even in the Grimm's time, the tales were already old, having been handed down from medieval times and before which tells you a bit about what we are up against in combating elder abuse if it's been around that long.

At The Elder Storytelling Place today, Mary B Summerlin: Letter to My Body

I'm sure the issues old people face are not new, but seem so much more abundant because of the numbers of people who reach advanced ages these days, coupled with the fact that there are now agencies that focus on elder care and reports of abuse.

You didn't reference the Grimm television series that premiered this year, Ronni, but it was an interesting adaptation of the Grimm stories. It was also set in Portland, OR.

I loved Grimm Fairy Tales and, like you Ronni, I read them over and over again. They always had a moral and that overshadowed the parts that were scary to a child. (Wicked witches were most frightening).

Elder abuse has always been a reality and still is. I am afraid that in some cultures it will remain, but other, more primitive cultures, revere their elders. Maybe that is a topic to be explored.

There's much truth in old fables and fairy tales. Families used to teach their children a reverence for their elders; today, I fear, maybe not so much.

Here's a more lighthearted take on the tale:

When I'm an old lady and live with my kids

I'll write on the wall with reds, whites and blues,
And bounce on the furniture wearing my shoes.
I'll drink from the carton and then leave it out.
I'll stuff all the toilets and oh, how they'll shout!
(When I'm an old lady and live with my kids)

When they're on the phone and just out of reach,
I'll get into things like sugar and bleach,
Oh, they'll snap their fingers and then shake their heads,
And when that is done I'll hide under the bed!
(When I'm an old lady and live with my kids)

When they cook dinner and call me to eat,
I'll not eat my green beans or salad or meat.
I'll gag on my okra, spill milk on the table,
And when they get angry I'll run... if I'm able!
(When I'm an old lady and live with my kids)

I'll sit close to the TV, through the channels I'll click,
I'11 cross both my eyes just to see if they stick.
I'll take off my socks and throw one away,
And play in the mud 'til the end of the day!
(When I'm an old lady and live with my kids)

And later in bed, I'll lay back and sigh,
I'll thank God in prayer and then close my eyes.
My kids will look down with a smile slowly creeping,
And say with a groan. "She's so sweet, when she's sleeping!"
(When I'm an old lady and live with my kids) - Author Unknown

And then there's the fable of a young man sitting by the road who sees his parents carrying his grandfather in a basket. He asks where they are going, and they say "to the river to drown your grandfather, who is old and of no use anymore." The young man replies "Save the basket!"

That has always been one of my favorite fables.

***Families used to teach their children a reverence for their elders; today, I fear, maybe not so much. ****

Which is a good thing.

To "teach" a child that generic "elders" (simply because of them being older than the child) deserve respect is part of the problem that results in onging and systemic sexual abuse of children -- a lesson that many are beginning to understand in part because the the publicity surrounding the Sandusky Penn State scandal.