VP BIDEN ON MEDICARE AND SOCIAL SECURITY
Last Monday, Vice President Joe Biden addressed a group of community leaders from senior centers around the country who were visiting the White House. He asserted the Obama administration's continued opposition to Medicare vouchers and cutting Social Security as, for example, in the Ryan plan.

Let's be sure to hold this administration to that promise. You can view the entire 30-minute speech here.

SPEAKING OF VICE PRESIDENTS
Tim Pawlenty, often mentioned as the frontrunner to fill the spot as Mitt Romney's vice presidential candidate, seems to have a real knee-slapper of a sense of humor.

Here's an example from Pawlenty's book, Courage to Stand, as reported by Gail Collins in The New York Times:

”Introduced to a man who had just been fitted for a new hearing aid, Pawlenty decided to josh him by 'moving my lips as if I were talking but without saying anything so he’d think something was wrong.'”

Now THAT's the kind of humor that distinguishes a real leader from the rest of us.

SAVING TIME, POWER AND MONEY IN THE KITCHEN
My local power company, Pacific Gas & Electric Portland General Electric (PGE) sends out a newsy little email each month with suggestions for using less power. This month, they answered a question I've had for a long time about the most efficient way to boil water.

One can use a tea kettle on the stove, the microwave or, as in my case, a stand-alone, electric tea kettle. Here's a graph showing the kilowatt hours used with each method:

It seems that my electric teakettle is a good choice. But how about time? Here's another graph showing number of minutes to boiling for each:

So good for me. By the way, with these graphs, I'm saving you an excruciatingly boring video about this water boiling experiment but you can view it here if you must.

MY FIRST CHRISTMAS CATALOGUE
In the mail this past week I received my first Christmas catalogue of the year. Usually they wait until August. I just thought I'd mention that.

CUTEST BULLDOG PUPPIES EVER
There's nothing to say here but suggest you sit back, put up your feet and enjoy about three minutes of a batch of English bulldog puppies doing what puppies do.

THE MICHAEL MOORE FILM FESTIVAL
Well, officially it is the Traverse City (Michigan) Film Festival but it was created by Michael Moore after he renovated The State, a long-shuttered classic movie theater in his home town and reopened it in 2007. 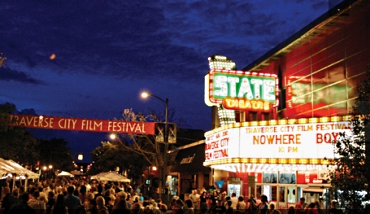 Besides the annual film festival which this year runs from 31 July to 5 August, the theater has become an integral part of the town:

”The festival now owns and operates the State as a year-round, community-based, mission-driven, and volunteer-staffed art house movie theater. The State shows great independent films year-round, along with lots of special programming, including a Friday Night Flicks series and weekly 25 cent kids and classic matinees.”

What a great use for a lot of profit from film making. You can read all about The State theater and the film festival here.

MONGOLIAN SNOW LEOPARDS
Snow leopard cubs have never before been seen in the wild. This amazing footage is from two different dens in Mongolia being studied by the Snow Leopard Trust. Take a look:

For those with questions about human intrusion, the Snow Leopard Trust left this message on the YouTube page:

“Thank you all so much for leaving comments, and asking about the mother's reaction to the smell of humans is very important. After we went to﻿ the sites, we have been tracking the mom's locations via GPS and both have returned to their dens and are actively taking care of their cubs, so no worries there.“

There is a lot of interesting information and some adorable still photos here.

LOUIS C.K. VISITS WITH JON STEWART
Comedian Louis C.K. whose FX television show, Louis, was nominated Thursday for an Emmy, appeared on The Daily Show this week. Like his program, he is funny, profane and says a lot of things no one is “supposed” to say in public.

As um, colorful as he is, he is also really smart and he says a lot of true things. Take a look:

MORE OF THE ROAD NOT TAKEN
Following on a post about the Robert Frost poem, The Road Not Taken a week or so ago, TGB reader Lita Newdick emailed to mention that Randall Thompson set the poem to music and listening is, she says, like “visiting heaven for a little while.”

Here is one choral version from the Peninsula Singers of San Diego. There are many others on YouTube.

THE SQUIRREL AND THE CANDY BAR CAPER
I've been feeding the squirrels around my place just so I can watch them. But then a bluejay discovered the morning peanut cache leaving the squirrels empty-pawed.

Squirrels and jays may be equally notorious thieves in the neighborhood animal kingdom, but I think the squirrel in this video has figured out something that would flummox a bluejay.

Good stuff again. Thanks, Ronni. Oh, and about Pawlenty.........the only consolation is that he too will get old & even if he's plush with $$$, he'll still age as all do. Sad comment on U.S. "leadership". In spite of that, have a good w/end. Dee

I see that squirrel has a very refined palate.

Today he took a Mound Bar; he will return tomorrow for a Butterfinger.

Morning Ronnie....thanks for the good start to our day here. :)

The hearing aid joke reminds me of a former manager I had. A few years ago I noticed that there were certain tones I could not hear when people, particiularly men, spoke. My manager caught on to that and would speak in that tone range to me. He though the fact that I couldn't hear him was hilarious. Me, not so much.

Loved the Daily Show with Louis CK. I'm a big fan of both but since cutting off my cable to save money I rarely see either.

Tim Pawlenty's laugh at the expense of a hearing impaired person is so reminiscent of Mitt(ens) Romney's bullying of a gay student when he cut his classmate's hair.

Pawlenty should be Romney's choice of VEEP because they go well together and should find lots of people to laugh at during a campaign.

So, are squirrels evolving into clever candybar eaters? I would have though its first choice might have been a Snickers, but maybe it will keep trying until it gets that. It would make a good commercial for them.

Pawlenty is the former Governor of my state, Minnesota. We also are home to the nutcase, Michele Bachmann. (But then we also have Al Franken and Keith Ellison, and have had Jesse Ventura as governor as well-so what does that tell you?)He is a perfectly awful person, in my opinion, one of those innocent-looking but mean-spirited types who would look good making a matched set with Romney. He outright lies and smiles as he does so, and prays those lies away. The squirrel stealing the candy is a perfect accompaniment to that story.

Very good to be back where I can read you again! Thank you for the information and the entertainment. Am wondering how gas burners would stack up on the graph.
For Larry: I can't see The Daily Show or Colbert where I live, but fortunately I CAN see the shows online the next day. One of the few sites with videos that doesn't put up a message "Sorry, but it would appear you are trying to contact this site from outside the US".

Your first Christmas catalog? Really? ... groan ... Why don't they just make it a year-round holiday and be done with it.

On behalf of the HOH (hard-of-hearing) with whom I've worked extensively and the elders with age related hearing loss I continue to encounter, I'm furious with the insensitivity or maybe it's just plain ignorance and lack of knowledge about such sensory issues. Darlene's comment sums up to topic well.