ELDER POETRY INTERLUDE: As I Walked Out One Evening

As I walked out one evening,
Walking down Bristol Street,
The crowds upon the pavement
Were fields of harvest wheat.

And down by the brimming river
I heard a lover sing
Under an arch of the railway:
'Love has no ending.

'I'll love you, dear, I'll love you
Till China and Africa meet,
And the river jumps over the mountain
And the salmon sing in the street,

'I'll love you till the ocean
Is folded and hung up to dry
And the seven stars go squawking
Like geese about the sky.

'The years shall run like rabbits,
For in my arms I hold
The Flower of the Ages,
And the first love of the world.'

But all the clocks in the city
Began to whirr and chime:
'O let not Time deceive you,
You cannot conquer Time.

'In the burrows of the Nightmare
Where Justice naked is,
Time watches from the shadow
And coughs when you would kiss.

'Into many a green valley
Drifts the appalling snow;
Time breaks the threaded dances
And the diver's brilliant bow.

'O plunge your hands in water,
Plunge them in up to the wrist;
Stare, stare in the basin
And wonder what you've missed.

'The glacier knocks in the cupboard,
The desert sighs in the bed,
And the crack in the tea-cup opens
A lane to the land of the dead.

'Where the beggars raffle the banknotes
And the Giant is enchanting to Jack,
And the Lily-white Boy is a Roarer,
And Jill goes down on her back.

'O look, look in the mirror,
O look in your distress:
Life remains a blessing
Although you cannot bless.

'O stand, stand at the window
As the tears scald and start;
You shall love your crooked neighbour
With your crooked heart.'

It was late, late in the evening,
The lovers they were gone;
The clocks had ceased their chiming,
And the deep river ran on. 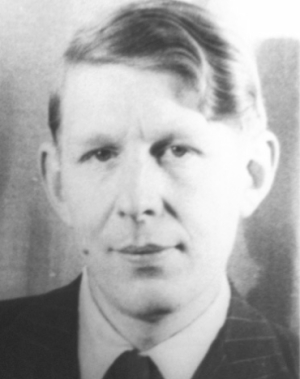 Wystan Hugh Auden was born in York, England, in 1907. He came to prominence as a poet in his early 20s. In 1939, he moved to the United States, eventually became a citizen and in later years divided his time between homes in New York City and Austria. He died in Vienna in 1973.

Auden is generally accepted to be one of the greatest English poets of the 20th century. Among his favorite subjects were everyday life, culture and politics which he pursued in just about every form of verse including haiku and limericks. Auden was also a noted essayist, editor, and playwright.

Here is a YouTube video of As I Walked Out One Evening read by Tom O'Bedlam. You'll find many more of his poetry readings here.

WOW! For some reason, I had never read the poem in it's entirety. Thank you.

What a devastating, beautiful poem.

All I can do is sigh and agree.

Auden is one of my all time favorite poets, in fact I read his poem "Stop all the Clocks" at both my parent's funerals. So spot on what I was feeling. Here's a link.

Ronni, I love his "Lay Your Sleeping Head, My Love" and think it'd be a good elder poem. It's a lovely gem. Cheers, ~K

He is a marvelous poet and this is such a wonderful poem. Thank you for sharing poetry on your blog, Ronni.

A lovely poem with which I was unfamiliar.