So-called “funny” presentations of elders like this one happen thousands of times across the U.S. every day and no one believes there is anything wrong with consistently portraying a certain group of people as dim, irritating and out of step with the world.

MARS CURIOSITY DRIVERS
Take a look a this image and in particular, check out the tire tracks left in the dirt recently on the red planet by the Mars rover Curiosity: 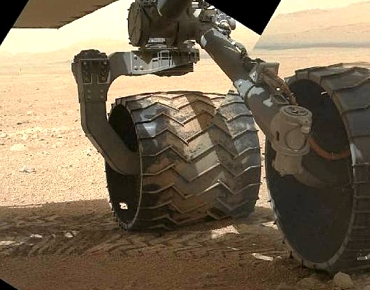 Tire tracks are boring, right? Well, not if you think about who put them there. Sixteen guys working on the Mars project have the coolest job in the whole wide world: they get to drive Curiosity:

”...the driving is not done in real time: during the Martian night, the team plans where to send Curiosity next and sends instructions via radio transmission as the Mars day begins. Then the drivers go home, back to life on Earth, with all of its “don’t forget to take out the garbage” mundanity.

“'You have to try not to think about what’s happening out there, which is, of course, completely impossible,' Vandi Tompkins, 39, one of the drivers, said with caffeinated exuberance.

“'The rover may be executing a successful drive based on your instructions,' she said, 'or you may have just sent a national asset over a cliff.'

“Or, as Mr. Heverly put it, 'Last night I drove on Mars, today I mowed the lawn — it’s completely surreal.'”

Go read the whole story at The New York Times. The drivers are thrilled with their jobs and you will be amazed and – oh, just go read it.

UNDERWATER GARDEN
In Cancun, there is a large underwater sculpture garden that scuba divers are allowed to visit.

”The main goal of English artist Jason Decaires Taylor’s work is conservation. Each of the more than 400 life-sized sculptures are made from ph neutral clay in order to promote the growth of coral reef and marine life.”

Lonely Planet has some more information. Thanks to John Starbuck of For a Dancer for the heads up about this.

GOOD NEWS FOR 2013 MEDICARE PART D
Paula Span at The Times' New Old Age blog did my homework for me and reported earlier this month that although there are many Part D (prescription drug) plans to choose from, premiums for 2013 will remain “basically level.”

You can read more about it here and when the annual Medicare enrollment period begins on 15 October, I'll have more general Medicare information for you.

PUTTIN' ON THE RITZKY
February 2012. Snow. Cold. Wet. And hundreds of Muscovites enjoying every minute of it. If, by 20 seconds in, you're not smiling, you're dead inside. (A second hat tip today to John Starbuck)

ADVERTISEMENTS FOR THE TITANIC
For a few weeks in 1912, maybe even a few months, the RMS Titanic was not a tragedy. It was the newest, biggest, fanciest steamship in the world and the White Star Line needed to sell tickets for her maiden voyage. 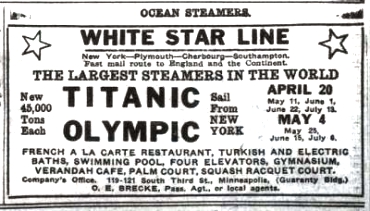 No television commercials in those days but plenty of newspaper and magazine ads. Here's another:

These are from the terrific nostalgia (or historic – take your pick) website, Retronaut, where you can see more Titanic ads.

JAY LENO AND THE 100-YEAR-OLD LADY
It happened this year back in February when a funny and charming centenarian named Dorothy Custer appeared with Jay Leno on the Tonight Show.

She was born in 1911 and lives in Twin Falls, Idaho. (Thanks to doctafil of Jive Chalkin' who sent this along for us)

SOME DAYS I JUST DESPAIR
According to Mother Jones which supplies all sorts of caveats on this story, Public Policy Polling asked

”...Ohio Republicans who they thought 'deserved more credit for the killing of Osama bin Laden: Barack Obama or Mitt Romney.'”

Here are the results as reported by Mother Jones: 15 percent gave Romney more credit and 47 percent said they were unsure.

Depending on your point of view, that's either awful or funny. However, it's not true. If you visit the PPP website to confirm the results [pdf] of the question (No. Q15), you find that only 6 percent chose Romney and 31 percent were not sure.

Even with the smaller numbers, I despair for the choices some voters make. How dumb, do you think, are those 6 and 31 percent?

MISSION IMPOSSIBLE SQUIRREL
I have a feeling that I've run this video before but I don't feel like looking for it and anyway, I enjoyed it as much this time as if it were brand new to me. (Hat tip to Darlene Costner of Darlene's Hodgepodge)

As for the squirrel possibly having been shown before but still enjoyed as though it was new...That may be one of the joys and positive aspects of old age.

Do you think Mitt saw "Puttin On the Ritzky" before or after he called Russia our "Number One geopolitical foe?"

I actually wrote to Chevrolet, pointing out the differences in the portrayals of older people in their Malibu commercial and the Toyota Camry one. While I doubt that my email made any difference, we can't complain unless we're willing to take action. That action has to include not being like the couple in that Chevy commercial, too, helping to perpetuate that myth. The strange thing is that throughout out extended family, it's us Boomers who are most interested in fuel efficient cars, so why they would alienate us, I don't know.

Just loved the 100 year old lady. I want to grow up to be her! What a great lady. A good example for all of us, young and old.

C'M on:
I'm 79 and I found the Chevy commercial funny. Parents do act like that sometimes. Don't be so age defensive that you forget how to laugh at your own peccadillos or other's. There is way more stuff out there to be offended by.

I too laughed at the Chevy commercial, but it would be loads funnier if the ages were reversed. Gee.

My toes were tapping to the Ritz so much my husband put on headphones to drown me out. He couldn't drown out my squirrel-laughter tho.

"Puttin (Close to Putin Hmmm) on the Ritzky" made me want to dance again. Gee, I wish I could. I wonder how they rehearsed this and if some of them are professional dancers.
It's always fun to watch these seemingly spontaneous dances.

Loved the little toddler jumping up and down. It reminded me of my granddaughters at that age.