Today’s column was suggested by Norma, the Assistant Musicologist. It concerns a couple of songs by ERIC BIBB and the contents thereof. I’m not surprised at this as Eric is a particular favorite of the A.M.’s.

I must admit he does put on a fine concert. Not surprisingly, for something suggested by the A.M., this is a column of blues, old and new. 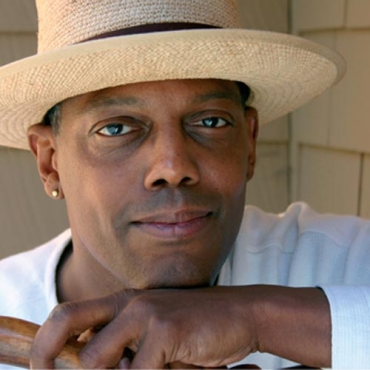 Eric came to music naturally – his father, Leon Bibb, was a trained singer but he was most notable as being part of the New York folk scene in the early sixties.

Eric’s uncle is the great jazz pianist and composer John Lewis, one of the Modern Jazz Quartet. His god-father was Paul Robeson. Whew. The Bibb household was regularly visited by musicians such as Odetta, Pete Seeger, Josh White, Bob Dylan and many others.

Eric made his TV debut when his father asked him to perform on his talent program. It wasn’t nepotism, even then Eric had talent, it seems. He has also recorded a couple of duet albums with his father.

From the early seventies Eric has lived in Paris, Stockholm and other cities in Europe. These days he is based in London and performs extensively around Europe and America and even comes here to Australia now and then. 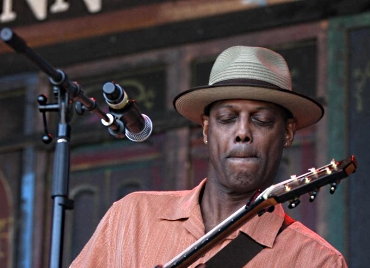 Eric often pays tribute to his predecessors. In the first of the songs today, he names a number of artists who have influenced him and his music. Not just him. The guitarists today are among the most influential in rock, blues and any other music that employs guitars.

MISSISSIPPI JOHN HURT is mentioned by many guitarists as an influence on their playing. 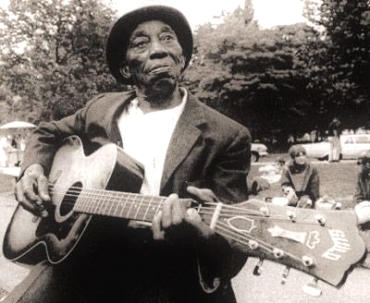 John taught himself to play the guitar when he was very young and developed his distinctive finger picking style because he thought that was the way a guitar should sound. Many later guitarists have agreed with him.

Eric isn’t the only one who sang about him. Tom Paxton, who played with him in the early sixties, wrote a song called Did you Hear John Hurt? that he still plays to this day. Here is John with Big Leg Blues.

Not only is ELIZABETH COTTON mentioned but a song of hers is there as well. That song is Freight Train. I remember a version of this on the hit parade when I was in knee britches (or something, I didn’t ever wear such a garment). That was by Rusty Draper.

I don’t have Elizabeth’s version in my collection and neither does the A.M. However, I discovered this wonderful clip of her on YouTube performing the song.

Here is GARY DAVIS. He’s mostly referred to as the “reverend” Gary Davis, but I’m not one for titles either earned or unearned. 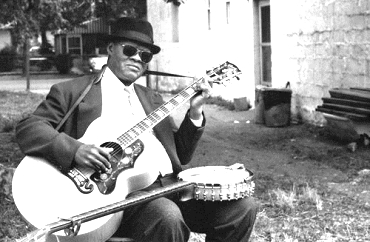 Gary was from South Carolina and was partially blind from birth. He lost the rest of his eyesight while still a child.

He taught himself to play guitar and developed a sophisticated style of playing that has influenced many guitarists since. He started recording in the thirties and continued until he died in 1972. Here he plays a live version of If I Had My Way (Samson And Delilah).

♫ Reverend Gary Davis - If I Had My Way (Samson And Delilah)

SON HOUSE sounds like a made up name as were a lot of blues singers’ monikers, but it isn’t, Well, not completely. His folks named him Eddie House after his father, and he was the son so... 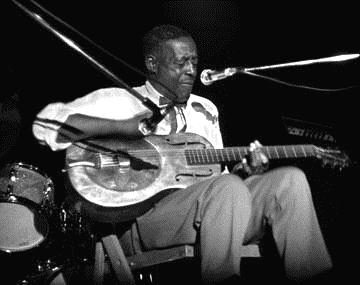 He was around so long that he influenced Robert Johnson’s guitar style, but contemporary enough to do the same for Bonnie Raitt, John Hammond, Jack White and Al Wilson amongst many others.

He was first recorded by Alan Lomax in the thirties but lived long enough to make records with several of those folks mentioned.

Son was yet another blues musician from Clarksdale, Mississippi - well, from Riverton, two miles away. Close enough. This is Death Letter Blues.

SAM CHARTERS isn’t a musician; he’s a musicologist, a real one. I think he has done just about everything around the blues.

He spent years searching out the old blues musicians, filmed and recorded those he found still alive, was producer and A&R man for a number of record labels, wrote books. The list goes on. 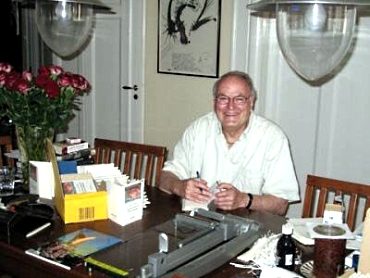 Sam started listening in the days of 78 rpm records. In his own words, “I spent most of my after-school hours in Sacramento in the much battered booths of a tiny shop that an older friend, Russ Solomon, had opened in the back room of his father’s drug store. The name of Russ’s first little counter operation was Tower Records.”

And we all know where that led. Many’s the time I’ve haunted the branch on Columbus Avenue in San Francisco. Alas, no more.

By the 1950s, Sam was out recording the old musicians. One of those who had died before Sam managed to track him down was BLIND WILLIE JOHNSON. Sam described him as a singing preacher, rather than a bluesman, but several blues guitarists cite his playing, in particular on this song.

Eric has recorded a version, but today we’ll go back to Willie’s version of Nobody’s Fault But Mine.

Sam did find LIGHTNIN’ HOPKINS or indeed, after a few years of enquiries, Lightnin’ found him. As Sam pulled up at red light in Houston, the driver of the next car asked, “You lookin’ for me?” Yes, it was Lightnin’, and it’s a good excuse to play a track. 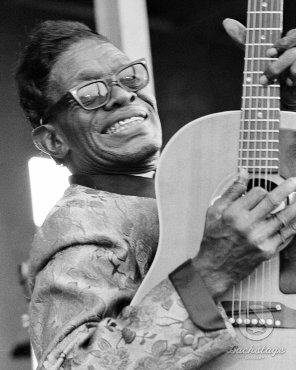 Lightnin’ recorded prolifically, generally when he wanted some money but producers and engineers found him difficult to work with. He didn’t play to order; they just had to record whatever he felt like playing on the day.

On this day, everything went well, so we’ll hear Lightnin’s Special. This is just him having a bit of a boogie.

POPS STAPLES, Roebuck to his family, was the patriarch of the Staple Singers (and father to Mavis Staples). 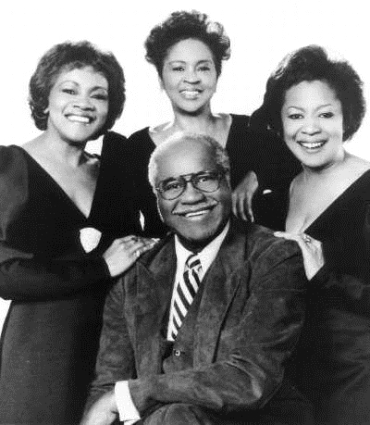 The Staple Singers was a fine gospel group who also recorded pop songs. They were particularly good when they were on Stax Records and among their backing musicians were Steve Cropper and Duck Dunn.

The song I’ve chosen may sound rather familiar. The Rolling Stones recorded a song that’s attributed to Jagger/Richards but I think they may have heard this song before they wrote their version.

Here are the Staple Singers, with Pops out in front playing the guitar and singing, with This May Be the Last Time.

♫ The Staple Singers - This May Be the Last Time 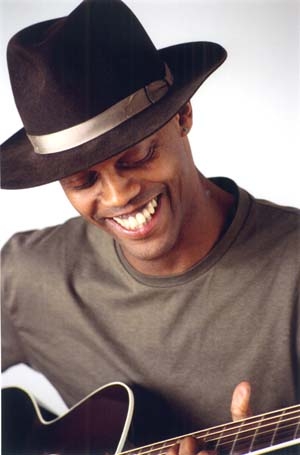 We are now up to the second of Eric’s songs. This only mentions one person, but that’s okay, we’ll have enough music. The guitar in question did indeed once belong to Booker White (or Bukka – Booker was his birth name but some unscrupulous record company dubbed him Bukka), and now Eric plays this song on it and about it. The song is Booker's Guitar. 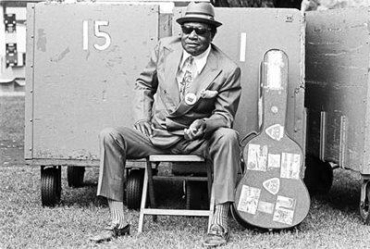 Booker was a second cousin to B.B. King but his guitar style is quite different. He liked to play a steel guitar using a slide with open tuning which is apparent in the song, Special Stream Line.

In an earlier column I’ve featured Tom Rush performing a really fine version of this song (Panama Limited), or perhaps an interpretation would be a closer description. 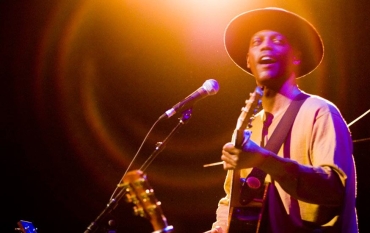 We’ll end with another song from Eric that has no other musician is mentioned in it at all. But it is about the life of a touring musician which seems an appropriate way to close today. The song is Diamond Days.

Thank you so much, from a Texas reader.

"...some days you walk; some days you ride..." indeed. Thank you for this music lesson. You and the A.M. are a font of interesting information! I especially enjoyed watching the video of Elizabeth Cotton. Wow!

Find the flaw in this argument: Eric Bibb: very good
Therefore
The Asistant Musicologist: very good.
(I know you can't).

Great to hear Eric Bibb (who does vist Australia) and some of the oldies and goodies. I was turned on to blues in the late 50's. There's something both basic and dextrous about it I love. Sometimes we look to where we come from, in time and country.
Thanks Peter

I'm late to this but loved the column. Cile, if you like Elizabeth Cotton check out Etta Baker, plenty of YouTube videos. She's another late icon of Piedmont Blues guitar. She came along after E. Cotton and is from my area of NC. She died in 2006. She is generally less well known than Cotton but did record with the likes of Taj Mahal and others. I think she's great! Thanks, Peter, for your work. Always enjoy!

I really enjoyed this column. Eric Bibb is one of my favorites. He and his father have both visited and performed here (Gulf Islands, B.C.) Hats off to the AM :)