FIRST EVER STREISAND CONCERT IN BROOKLYN
She is an (un)acquired taste for many but whether you love her or hate her, there is no question that Barbra Streisand is an icon of our generation. What's amazing is that in all these years Barbra, who is now 70 years old, has never performed in her native borough, Brooklyn.

She did so finally on Wednesday at the new Barclays Center and she will be there in concert again tonight, Saturday. Here is some background and footage of the diva I found on the web this week.

NEWSPAPER SERIES ON “MAPPING THE BODY”
Remember that old Dove soap television commercial about cleaning all “2000 parts” of our bodies? Well, The Guardian has been working on a series for a year or two, reporting on parts of our “wonderful body” one piece at a time.

I know this because I recently discovered the paper's story on the temple:

”the pterion...Roughly corresponding to what we all know as the temple, this place...is the junction of four separate skull bones, the frontal, parietal, temporal and sphenoid. Sometimes referred to in neurosurgical circles as 'God's little joke,' the bony pterion is not just a hazard zone because it is so thin, but also on account of a big artery, the middle meningeal, which runs immediately beneath it.”

You can read more about the temple here and see a list of all the stories in the series here.

COLUMBUS CIRCLE ROOM
Columbus Circle sits at the southwest corner of Central Part in New York City. I am deeply familiar with the Gaetano Russo statue of Columbus because several jobs I held over a couple of decades were within a block of the monument.

Recently, Japanese artist Tatzu Nishi was allowed to build a penthouse room surrounding the statue which is open to the public for free via an elevator. Here is a video from inside the room:

When Nishi's installation is finished in mid-November, the statue, which was completed in 1892, will undergo a major conservation. There is a slide show at The New York Times with some different views of the room.

CONSTRUCTION OF LINCOLN MEMORIAL
As long as we're talking about statuary, the Retronaut website I've told you about published a whole bunch of old photographs of the construction of the Lincoln Memorial that took eight years from 1914 to 1922 in Washington, D.C. 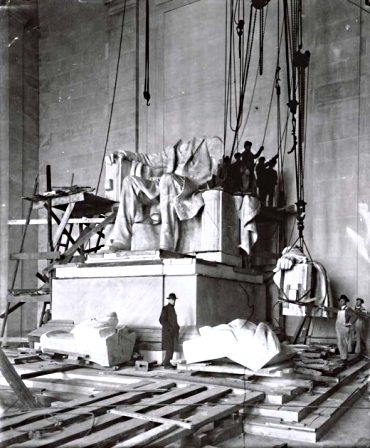 There are many more photos at Retronaut and all sorts of obscure facts and information about the Memorial are at Wikipedia.

THAT WILD AND CRAZY GUY FOR BOB KERREY
Nancy Leitz, who contributes many terrific stories to The Elder Storytelling Place, was the first person to send me this video – Steve Martin thumping for Bob Kerrey who is running for the Senate from Nebraska.

Kerrey is far from being my kind of Democrat so I do not mean this item to be an endorsement. I just think it's terrific to see Martin – which is rare these days – being Martin.

MOBILE DEVICES IN MEDICINE
Mobile devices, tablet computers, apps and electronic records. Medicine is going through many changes as technology brings enhancements and questions about their use in treatment.

Here's a good video report about it all and an accompanying print story at The New York Times.

CVS REFILLS PRESCRIPTIONS WITHOUT BEING ASKED
CVS is the second-largest pharmacy chain in the U.S. Some of their pharmacists have been be refilling prescriptions and submitting insurance claims without patient approval according to internal emails.

CVS denies that this is company policy - nothing more, it says, than the act of an overzealous pharmacy manager.

”Virginia Herold, executive officer of the California Board of Pharmacy, which licenses pharmacies and pharmacists, said she would have 'grave concerns' if claims were being submitted to insurers in this state without patients' knowledge...

“Herold said the practice described in the CVS emails could be considered insurance fraud — at least in California — because CVS sought reimbursements for drugs that patients never ordered.”

There is so damned much waste and fraud involved in all aspects of health care, I am dumbfounded at it all every time a read of another medical scam, as this one, uncovered by The Los Angeles Times, may or may not be. You can read more here.

1989 CELL PHONE COMMERCIAL
Most new technologies start out big and are slowly miniaturized until they are more comfortable and easier to use. Sometimes I forget what it was like in the beginning so it was fun to see this Radio Shack commercial for a 1989 cell phone:

DUCKS FIRST SWIM
They were not babies, these ducks. They were fully grown, having been rescued by the Woodstock Sanctuary from a home where they had been penned up without access to adequate water and food.

When they had recovered, it was time to introduce the ducks to their natural swimming environment - something that was far from the slam dunk you might expect. Take a look:

You can read more about the ducks at the Woodstock Sanctuary website.

Love the ducks! I'll have to come back when I have more time to see the rest.

My favorite was the ducks video!

I too loved the ducks. So glad to see that they finally took to the wate, realizing it's where they were always meant to be. I also got quite a chuckle out of the cell phone ad. Shows whata difference 23 years can make and leaves me wondering what communicatiion will be like 23 years hence.

And I have to look into this CVS thing. I have been stewing about this for awhile on a personal level. Since becoming caregiver for my MIL, I have been managing all her medication, going through CVS. They have an automatic refill program that is meant to be helpful, but the thing is they always seem to be filling things before they're needed, and their automatic calling system tells you a prescription is ready for pickup, but not what it is. As one of the largest Medicare RX programs, it would seem that they could do a better job of managing this.

Also loved the Steve Martin clip, because it was such classic Steve Martin. If all political ads were as enjoyable, I wouldn't be looking forward to Nov. 7 as much I am.

I love the Barbra Streisand video.

I’ll always remember seeing/hearing her for the first time on Broadway in 1962 in the play I Can Get It For You Wholesale. I was 20 years old same as Barbra. She played Miss Marmelstein and I recall as if it were yesterday asking my friend who this remarkable person was. We had never heard of her before. She was outstanding then and now.
I’m not certain but I think her soon to be husband at the time, Elliott Gould, might have played a part as well.

Thanks so much for the memory!

Any time you want to smile watch Steve & the ducks, in that order.

I have Medco for mail in prescriptions and they "enrolled" me in automatic refills without asking or telling me, and I cancelled by phone and online the first time they did it, and now they have done it again effectively giving me an amount on one medication in three months that is adequate for a year. I tremble to see what shows up in the mail box next. Will be calling, emailing again on Monday. Waste and fraud indeed.