ANOTHER WIN FOR THE END OF DOMA
On Thursday, the odious Defense of Marriage Act took another hit when a second federal appeals court ruled against the law prohibiting federal recognition of same-sex marriage.

"The new case was brought on behalf of Edith Windsor of New York City, who married her longtime partner, Thea Clara Spyer, in 2007 in Canada,” reports The New York Times. “When Ms. Spyer died in 2009, Ms. Windsor inherited her property.

“Because the Internal Revenue Service was not allowed, under the Defense of Marriage Act, to consider her a surviving spouse, she faced a tax bill of $363,053 that she would not have had to pay if the marriage had been recognized.”

Here is Ms. Windsor, age 87, responding to an earlier victory in her case a few months ago:

This may become the case that finally takes the question to the U.S. Supreme Court. You can read more about Windsor v. United States here.

FINALLY, A CLEAR, INFORMATIVE EXPLANATION OF ROMNEY'S TAX PLAN
Okay, now I get it. Click the image to see what I mean and a hat tip to Darlene Costner, the first of several readers to send this.

ELECTRONIC BODY IMPLANTS THAT DISSOLVE
According to the science journal, Nature, a team of researchers at Tufts University have developed “flexible electronic components" that dissolve in the body and in water:

”The components could be used to make smart devices that disintegrate once they are no longer useful, helping to alleviate electronic waste and enabling the development of medical implants that don’t need to be surgically removed.

“So far, the team has designed an imaging system that monitors tissue from within a mouse, a thermal patch that prevents infection after a surgical site is closed up, solar cells and strain and temperature sensors.

Take a look at this short video (there is no audio):

WEATHERMAN'S TOO-GRAPHIC GRAPHIC
This poor schnook. I'll bet no one will ever let him forget this. Might not be safe for work and small children.

DONORS PULL MONEY FROM SOUP KITCHEN
Undoubtedly you heard about Republican vice-presidential candidate, Paul Ryan's visit to a Youngstown, Ohio, soup kitchen where he was caught washing already-clean dishes for a photo-op.

Bad move for the Ryan campaign which did not ask permission, and worse for the charity that is meant to be a non-partisan organization because, as a result of Ryan's boorishness, some donors are pulling their money out.

“The monetary losses have been big. 'It appears to be a substantial amount,' Antal said. 'You can rest assured there has been a substantial backlash.'"

MOYERS V. O'REILLY
In that other debate earlier this month, The Daily Show's Jon Stewart versus Fox News anchor, Bill O'Reilly, Mr. O'Reilly took umbrage at the “fact” that taxpayers must pay for Bill Moyers broadcasts on, he said, NPR.

Oops. As pretty much anyone – except O'Reilly, apparently – knows, NPR is a radio network on which Moyers does not appear. Nor does Moyers take any federal money for his television program. Watch Moyers eviscerate O'Reilly for his ignorant attack.

VAMPIRE POWER
No, I'm not talking about those popular books and movies. This is about the power that leaks into electronic appliances that are left plugged in all the time.

My local energy provider, Portland General Electric, made this informative little video about the amazing amount of money these “always on” items cost us and how much we can save by being more diligent about unplugging some of those vampire appliances.

AGING WITH GRACE PHOTOS
Marketing maven, Chuck Nyren, who blogs at Advertising for Baby Boomers, sent along a link to a beautiful Pinterist section called Aging the Grace with a collection of photographs of old people. Here are two of my favorites: 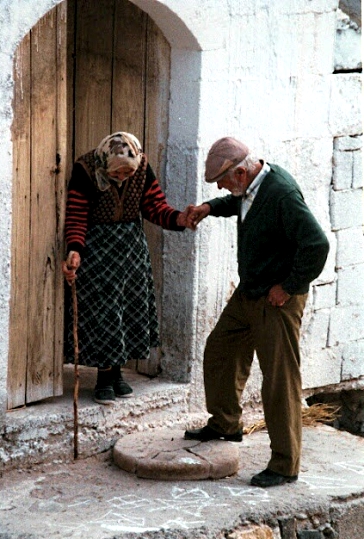 There are hundreds more photos of old people although further into the display, there are a lot of celebrities which are not nearly as interesting as the anonymous elders. But there is plenty to enjoy here.

DOGS AT WATER PLAY
A pool. A sunny day. A human to throw some balls. What more could a dog ask for. And we get to watch it in slo-mo. (I think it's a lot more interesting without the music, but that's up to you.)

Ditto! And I appreciated the info on saving electricity and will share it!

Ahhhh yes, in agreement with the above, but best of all the faces & pictures.........lovely, lovely. Photos worth more than a thousand words! Thanks again, Ronni. Dee

Bill v. Bill. You know which Bill would win. And that is why the "other one" won't accept the invitation of the other.
Ms. Windsor's win is fantastic. (She is amazing at 87) This kind of case is huge, and another reason why the election, and who will be appointing Justices to the Supreme Court, is so very important to the future of our country.