HENRI CHAT NOIR - POLITIQUE
We have featured videos of Henri the depressive cat here in the past and since then, he has released some more. Here is one in which Henri ruminates on politics:

I read that Henri's producer William Braden is a professional videographer who now supports himself fully with Henri-related ventures. I'm sure we'll be seeing more videos.

WEIRD AND WONDERFUL CHEESE COMMERCIAL
Director Ruairi Robinson who made this commercial for French television says cheese and monsters are two of his favorite things. Me too now.

More videos from Ruairi are here.

IF THE WHOLE WORLD COULD VOTE
TGB's own musicologist, Peter Tibbles, sent along the results of a 21-nation survey on preferences in the U.S. presidential election. Obama runs away with it - 20 countries on his side of the ledger:

”Overall, an average of 50 per cent would prefer to see Obama elected, compared to only 9 per cent who prefer Romney. The rest express no preference between the two.”

Peter wants it noted which two “civilized countries” top the chart for Obama. You can read more here.

DUMP CITIZENS UNITED
San Franciscans seem to have a penchant for sending messages via thousands of people aligned on the beach in exactly the right places. I've seen them do this before although I don't remember what they were telling us that time. (Hat tip to Nikkie Lindquist of From Where I Sit)

SMILIES FROM 1881
Everyone knows what smilies (sometimes called emoticons) are, right? Those little icons made of keyboard symbols that express emotions. :-) or :-O and so on.

You may think they're new. I did. But they go back as far as 1881. This from the letterpress department of Puck magazine via the Retronaut website. 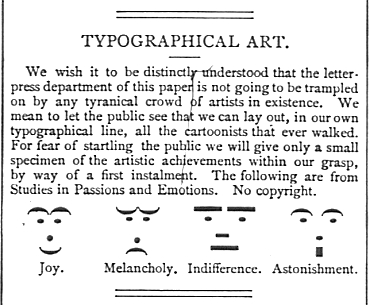 Carlin died in 2008 and I especially miss him when we are deep into political campaigns. Which is a good excuse to run one of his old but still oh-so-contemporary riffs.

This was recorded in 1992; it could have been yesterday.

You can read more about naming George Carlin Way here. 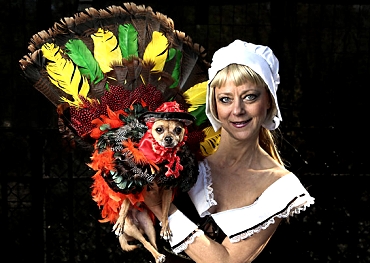 You can see a series of doggies in costumes here.

KITCHEN CONFIDENTIAL – ANTHONY BOURDAIN
Kitchen Confidential, which includes almost as much about sex, drugs and rock & roll as food, is still the best, funniest, most outrageous book about restaurants ever written.

For the tenth anniversary edition due out soon, author Anthony Bourdain sat down for a chat with his editor, Dan Halpern:

The second half of the short interview is here.

BABY ELEPHANT RESCUE
A tiny (well, that's relative) elephant falls into a pit in Kenya and can't get out. Humans to the rescue:

The rescue was done by the Amboseli Trust for Elephants, an organization that "aims to ensure the long-term conservation and welfare of Africa's elephants in the context of human needs and pressures through scientific research, training, community outreach, public awareness and advocacy."

That last link to the filmed rescue of Babar (oops! Kenyan Zombe's baby elephant) is a prize keeper. Most people are good, and only a minority is evil... (though that's still too many).

Great group of interesting things. I love Carlin. He must be screaming at all of us from wherever he may be. The elephant video is great. And I love that group on the beach in SF. Thanks for putting them all together for us.

Great posts today! I loved the Henri, as always, and the cheese commercial was fantastic! It's hard to believe that it's been 20 years since the Carlin routine; I miss the Hippie Dippie Weatherman. Also hard to believe it's only been ten years since Kitchen Confidential came out. It feels like I read that a lifetime ago, and he's done so much since then, it hardly seems possible it could be only a decade. Ending with the poignant baby elephant rescue was perfect. Thanks for all the effort you put into this each week Ronni.
%vZ (This is my Picasso-esque smilie emoticon of the day).

What does Peter's graph say about the intelligence of half of the U. S. voter's? Not a pretty picture.

I love Henri (castration without representation - so funny) and the video about the baby elephant was heartwarming.

Probably one of the best Interesting Stuff post you've had in recent times with all this content. Thanks Ronni. I've transferred some of it over to my FB page

I loved the George Carlin riff on our similarities. What a genius he was at observing universal human behaviours. That's probably why his humor seems so timeless.

Thanks, Ronnie for a fun read/watch column. I was sad not to be able to see the baby elephant video. Apparently it had to be removed.

I sent the beach video and the World Survey for Obama (my title) onward to like-minded friends. Certainly the survey shows that the "apologist President" meme is absurd. Great stuff!

I've republished the elephant video and it is working again - at least for now.

NPR reports that in an August poll, Israel supports Romney 2 to 1. That's right in line with the Republican base Christian Right.
Blew another Saturday afternoon enjoying your collection of great videos. Thanks. I always look forward to Saturday's blog.
PS: I just finished "Tribes of Eden", a good read, to be sure.

Good stuff. And, oh my, that elephant rescue! Phew!!!