BLACK FRIDAY AT THE 99 CENT STORE
Improv Everywhere is a New York City prank collective that likes to cause a little chaos now and then. On Black Friday, they staged a rush on a 99 cent store. Take a look – the reporter is an actress in on the joke. (Hat tip to Nikki Lindquist of From Where I Sit)

THE MAN WHO INVENTED THE EMOTICON 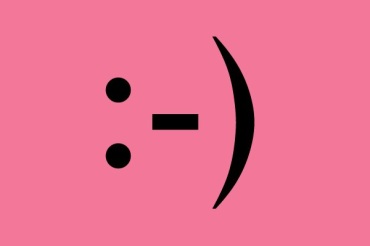 We all use them, variations on the smilie or frownie, and it feels like emoticons have been around forever. Not so and The New York Times has tracked down the inventor:

“'The first line of my obituary is going to mention the smiley face,' says Scott Fahlman, who would rather be remembered for his research into artificial intelligence.”

It was 1982 when Mr. Fahlman was a young professor at Carnegie Mellon and he decided the infant internet could use a “'joke marker' to take the sting out of mocking statements or pranks."

A tiny little piece of history. Go read more about it here.

EMPIRE STATE BUILDING GETS NEW LED LIGHTS
For all the nearly 40 years I lived in New York City, the top of the Empire State Building was lit up in special colors for holidays: red, white and blue on the Fourth of July; red and green and Christmas; green for St. Patrick's Day, etc.

This past week, the venerable building got a color facelift, new LED lighting that can produce millions of shades of color. Take a look:

THE FREEWAY BLOGGER STRIKES AGAIN
For a number of years, someone who calls him/herself the Freeway Blogger, based in the Los Angeles area, has been hanging notices – often about global warming and climate change – where drivers can't miss them.

”Here's how it works,” says the website. “When you put a sign on the freeway people will read it until someone takes it down. Depending on its size, content and placement, it can be seen by hundreds of thousands of people.”

Here is one of the Freeway Blogger's Thanksgiving signs: 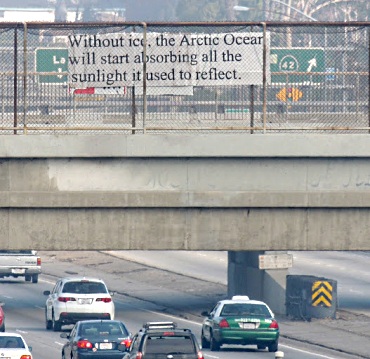 Climate stuff frightens me more than anything else I can think of – so much so that to think about it at all paralyzes me so mostly I don't. For people with more integrity about this, Jan Adams keeps up with climate news in her Warming Wednesdays series at her blog.

You can see a bunch of additional signs the Freeway Bloggler posted on Thanksgiving here along with many past signs.

”Researchers...said they think yawning is a developmental process which could potentially give doctors a new way to check on a baby's health.”

You can read more about fetus yawning here.

SEATTLE POLICE GUIDE TO SMOKING POT
In our recent election, the states of Colorado and Washington approved measures to remove restrictions on marijuana use by adults.

In preparation for the new law's inception in Washington state on 6 December, the police department in their largest city posted online an intentionally funny but also useful instruction page titled, Marijwhatnow? A Guide to Legal Marijuana Use In Seattle, in a Q&A format. A couple of examples:

Q: Can I legally carry around an ounce of marijuana?

A: According to the recently passed initiative, beginning December 6th, adults over the age of 21 will be able to carry up to an ounce of marijuana for personal use...

Q: Well, where can I legally buy pot, then?

A: The Washington State Liquor Control Board is working to establish guidelines for the sale and distribution of marijuana. The WSLCB has until December 1, 2013 to finalize those rules. In the meantime, production and distribution of non-medical marijuana remains illegal.

Q: SPD seized a bunch of my marijuana before I-502 passed. Can I have it back?

You can read the entire Marijwhatnow? A Guide to Legal Marijuana Use In Seattle here.

SALMON FISHING IN FLOODED ROAD
Wow, did this dog get lucky. It happened in Mason County, Washington when, due to heavy rains, rivers burst their banks and salmon wound up swimming across roads.

"...that's just fine with at least one local dog. The pooch, who must be thinking that Christmas came early, wanders into the road, snags a salmon like he's at a lunch buffet and trots off down the road. No work necessary."

AS SOON AS THERE WAS PHOTOGRAPHY, THERE WERE LOL CATS
From my favorite historical image website, Retronaut, comes images from 1870s that closely resemble today's LOLCAT internet meme. Here's one: 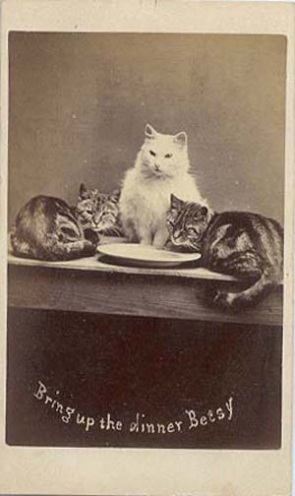 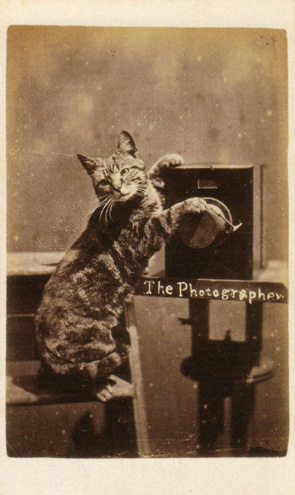 You can see a whole lot more 130-year-old cat photos at Retronaut.

HENRI CHAT NOIR – THE VET
Here at Interesting Stuff, we have been following Henri the depressed black cat as each of his videos turns up on the web. You may be up to date, but I had missed this one:

I just loved the 99 cent store improv- made that guys day for sure!

I love Henri - he is so cynical that he's comical.

I loved Black Friday at the dollar store. I imagine most folks here remember Allen Funt and his Candid Camera shows, even the early ones from the 1950's. Although I liked his bits, even as a child something often made me feel uneasy watching them. Later I realized that I empathized with the "victims" and thought perhaps they were sometimes being laughed at not along with.

I particularly liked the fact that the improv people actually spent some money at that store.

There's no subtitle for Henri's parting remark, and it's said very quietly - "Merde". In polite internet society, usually transcribed (if at all) as "Sh*t". Or perhaps, for the faint-hearted, "foiled again."

It is Henri's parting remark that made me laugh the hardest. Like le malheureux Henri, just when I am depressed and determined to say to hell with the world and all in it, some fool comes along and picks me up!