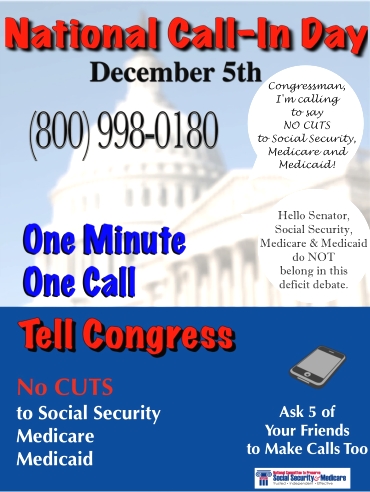 President Obama offered Congress a budget free of cuts to these programs. On Monday, House Majority Leader John Boehner made a counteroffer which includes:

• Increase eligibility age for Medicare from 65 to 67. There are good reasons not to do this. Just one of them is that healthcare coverage after retirement and before Medicare would be made prohibitively expensive by private insurance companies.

• Change the method of calculating Social Security cost-of-living increases (COLA) to the chained CPI which would immediately reduce benefits to current recipients.

• Extend the Bush tax cuts. That is, more billions for billionaires.

That's right. The Boehner proposal is to avoid the fiscal cliff by cutting elders' earned benefits while further enriching billionaires.

The Republican Congress is simply not a serious body and the White House rightly rejected the entire counteroffer.

Social Security is sound for many years to come. It needs only minor tweaks (NOT chained CPI) to ensure it will be there for the next 75 years.

Medicare/Medicaid are an entirely different matter - more fraught and more complex - which is exactly the reason changes should not be rushed in a hastily built budget done with no thought to consequences.

What I want to see before we change a penny of those programs is some solid research, study, review and hearings with experts the country can trust. But that's for later.

Today, we must tell Congress not to cut Social Security and Medicare. Don't whine to me that your Congress people won't listen. It is number of us, number of phone calls that count and all members of Congress absolutely do keep a list of the incoming calls and what they say.

This makes it hard for members of Congress to claim they are representing their constituency by voting to slash benefits when the messages delivered to their offices run exactly the opposite. So make your voice heard today in Washington.

The National Committee to Preserve Social Security and Medicare (NCPSSM) has a dedicated legislative hotline for you: 800.998.0180.

I've done it and it's easy. Just follow the voice instructions and you can't go wrong leaving a short, to-the-point message with your senators, representative and the White House. I got a “busy circuits” message the first time I phoned but two minutes later it went right through.

Please take the time to telephone today. Do your part to ensure that Social Security, Medicare/Medicaid are not destroyed by Republicans and their rich benefactors.

Thanks for the info. It's done!

Done. In calling Nancy Pelosi, I could thank her for being a bulwark against this bull. She seems to be playing that role; in the end, she's a team player, so if the Prez caves on us, she'll round up votes for that. But for now, she's hammering on our side.

Thanks for taking the lead, Ronni.

Thanks for posting this call in number. It was really easy to use. I called both my congressman and my senators.

I'm on hold now for the White House comment line. I've been holding quite a while. Dare we hope that many are calling with this same message? I have already called my representative and both senators. Thanks for posting the number. I have signed the petition, too.

I am on hold for the comment line at the White House and have been for 10 minutes. I will stick it out.

Whoo Hoo. I just got through. It might be interesting to know the responses I got from my 4 calls. Gabrielle Giffords (soon to be Ron Barber), my Congressperson, phone was answered by a friendly and very warm man and I was not rushed. He asked if I would give him my name and contact number, which I willingly did.

Senator Kyle's office was curt and said he would relay the message. Sen. John McCaine had a voice mail answering service and I was not able to talk to a live person.

The comment line at the White House obviously took my message as she said she did not understand the last part and I heard typing as I talked. I had added that Medicare and Medicaid were separate issues and too complicated to make quick fixes in a budget debate. All three were separate issues.

If people want to look up their representatives numbers they can call their offices direct and not have to go through using the hot line each time.

The hot line worked well for me. Made my calls..Senators Feinstein and Boxer and Representative Issa. I printed this post with the numbers to personally hand to like minded friends .... and stand there until they call :)

Pelosi is hearing at least some of this. In an interview with Greg Sargent today:

It’s a perennial fear among liberals: In the quest for a fiscal cliff deal, the White House and Democrats will ultimately acquiesce to GOP demands to raise the Medicare eligibility age. But one Democrat is drawing a line against this possibility: Nancy Pelosi.

“I am very much against that, and I think most of my members are,” Pelosi said in an interview with me today. “I don’t see any reason why that should be in any agreement.”Now we have a few other items for the Speaker ... but she matters a lot.

I didn't read this until I got home from work and it's now after midnight in WA D.C. However, I've already emailed my (Republican) representative in the House. My two Democrat Senators (Murray and Cantwell) are firmly on our side.

I didn't read this until later, so at 1+ A.m., actually on Thurs., the 6th I phoned the number -- was able to get right through. My lameduck Representative Drier's answering machine asked for name, address and took my message. (Note: I phoned his D.C. office last week on this matter also, and had spoken with his local office before Thanksgiving. The latter suggested there was nothing important coming up.)

Senator Feinstein's office had a recording to call back during office hours -- unable to leave message, but she's supportive of President's budget issues.

Senator Boxer's office recorded a message, requested no I.D., but I left my name and address -- know she is also supportive of these issues.

Everyone...
When we do these call-ins, it's important to call whether or not your representatives support or oppose the issue.

They all count the number of calls they get and what they say. These are added to the statistics Congress has on what the country supports and does not support.

FWIW I meant to note Representative Dreier has been part of the block preventing resolution of this fiscal budget crisis, and the SS, Medicare issues. (I corrected his name spelling -- guess I was tired and not as alert as need be.)

Yeah, Sens. Feinstein and Boxer need to be able to show they're supporting their constituents views.